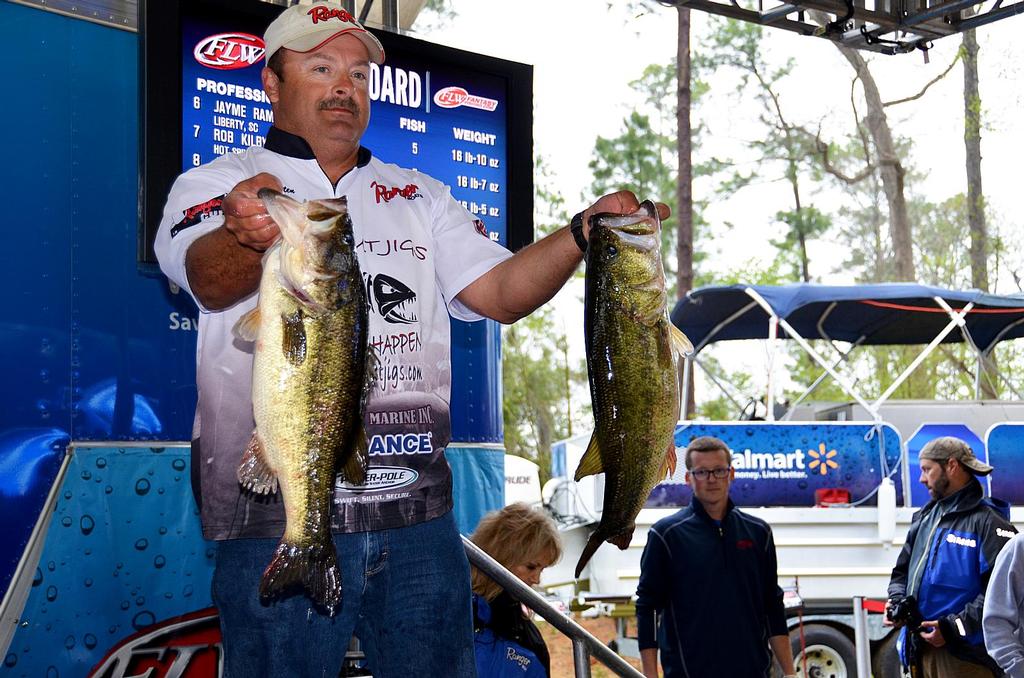 Four of the top-10 anglers surpassed 20 pounds, and the 20th-place cut currently sits at 16 pounds, 13 ounces.

“This was a total surprise based on my practice,” Cotten said. “I had about 16 pounds in practice, and they just kind of moved in.”

Like many in the field, Cotten lamented the effects of south winds that began gusting across Sam Rayburn at 15 to 20 mph right from the start of competition. Rather than tear across the lake and hit the few spots he located in practice, Cotten camped out in one spot on what he called an “all-day deal.”

“I didn’t catch my last fish until 30 minutes before weigh-in,” he said. “I just kept fishing hard. They’re not really holding on anything, other than a little grass line. Who knows if they’ll be there tomorrow.”

Most of the top anglers fell into one of two camps today: cover water with reaction baits or thoroughly scour a few key spots with bottom baits. Cotten is among the slow-fishing group. He landed seven quality fish from a roughly 2-acre area with just two lures – the same two lures he’s been using since the start of practice.

“Honestly, I think these were mostly prespawn fish,” Cotten said. “Fishing slow was necessary to coax a bite. They haven’t really moved up in numbers yet, but I think they’ll move in more as the weekend goes on.” 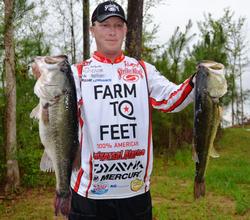 Montgomery was among the day-one blitzers. He was late in arriving to Texas for practice after the B.A.S.S. Elite Series event in Florida. After less than a day and a half to sample Rayburn’s waters, he used this morning’s competition hours to branch out into eight or 10 areas and eventually uncovered a pattern that helped him narrow down his options for tomorrow to two primary chunks of real estate.

“I covered a lot of territory,” Montgomery said. “It was tough. I was just fortunate enough to run into a few bigger bites. I think I know how the big ones are setting up. My big fish were all prespawn today, but it’s going to change because the big ones want to move up really bad.”

His big one today was an 8-pounder, which came from the same place where, in practice, Montgomery said he got a look at the biggest bass he’s ever had on a line in his life.

“I’m pretty sure I could run this pattern and find more water, but these areas are really big,” he said. “I just don’t get enough bites [to try and learn more spots].” 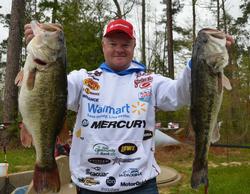 Walmart pro Mark Rose of West Memphis, Ark., was the first angler to cross the stage with more than 20 pounds. Rose falls into the “in-between” category of fishing techniques – not really fast, but he’s not soaking his two go-to lures either.

The key for Rose was a particular type of structure where bass are staging on their way to and from bedding areas. Having some type of drain or access route to bedding pockets makes a spot even more attractive to him.

“I’m getting some good bites,” Rose said, “but I start on one spot and it takes forever to get a bite. I’m just catching one fish here and there. That’s a typical staging scenario, especially prespawn. I need wind and clouds. I’m not looking forward to sunny, calm weather.”

Rose fished from the dam to the Cassel-Boykins County Park takeoff site. His big fish was a 7-plus, though he’s hoping more for a consistent catch tomorrow. 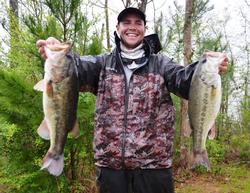 Ryan Davidson has some top-10 momentum coming off his ninth-place finish at Lake Hartwell earlier this month. The West Virginian was noticeably confident, but especially cautious of revealing too much information this early in the event.

“I’m getting in a couple areas and camping,” he said. “From my two spots I had my fish by 10:30 and then went practicing. I ended up culling two fish.”

Davidson’s key spots from day one are just a portion of the potential big-fish-producing locations he’s located this week, which began with a couple of 20-pound practice days.

“I caught 18 keepers today,” said Davidson, adding that his spots should replenish during the tournament. “The weather today didn’t hurt me. I need some wind and clouds, but really, sun or clouds, it doesn’t really matter.” 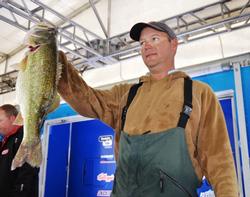 Today was nothing complicated for veteran pro Steve Kennedy. He “just went fishing” after only getting a half-day of practice.

Kennedy found a few of his spots were blown out first thing in the morning, and he countered by running and gunning with a combination of fast- and slow-moving lures.

“Fishing shallow and covering water – I like fishing that way, especially when the conditions are like this,” he said.

His big break came after switching from a soft plastic to a spinnerbait.

“I picked up the big spinnerbait, and within 10 casts I caught a 5-pounder,” he said. “Then I caught another one that broke the bait in half.”

Later, he caught 7-14 with a worm to bump his limit up into top-five territory.

In the Kennedy’s eyes, the warm-up forecast for the weekend could only make his program even sweeter.

“The sun could set them up better,” he said. “There’s not as many up right now as I’d like. They ought to be storming the banks by the weekend.”

Beale and Self tied for co-angler lead

Most of the top-20 co-anglers are packed in tight in the 10- to 13-pound range, but Mississippian Tim Beale and Lawndale, N.C., co-angler Eric Self stood out among the back-boat crowd with limits weighing 18 pounds, 4 ounces. 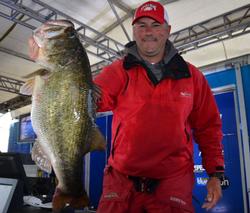 Beale’s big break came in the form of an 8-pound, 9-ounce giant he caught by targeting specific pieces of wood cover and other targets within shallow grass.

“I like to see what the pro is doing and try to find a pattern within his pattern,” said Beale, who fished with pro Bob Behrle today. “I don’t want to mimic my pro or be in competition with him. He [Behrle] was fishing one side, and I was fishing the other. I just happened to get the bites.”

Beale is the reigning Rayovac FLW Series Central Division Co-angler of the Year, which qualified him to fish the 2014 Forrest Wood Cup. He’s hoping to also qualify via this season’s Tour and prove himself as one of the Tour’s best amateur anglers. 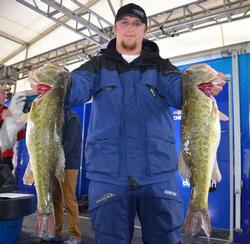 Beale’s fellow co-angler leader Self was paired with pro Brad Rightnour on day one. He rotated between a Z-Man Original ChatterBait for shallower areas and a Bill Lewis Rat-L-Trap in deeper water.

“I only had four at around lunchtime, and then I went on a tear and caught six in a row,” Self said. “I just got lucky and had two big bites.

In FLW Tour competition, pros and co-anglers are randomly paired each day, with pros supplying the boat, controlling boat movement and competing against other pros. Co-anglers fish from the back deck against other co-anglers. The full field competes in the two-day opening round. After day two the field is pared to the top 20 pros and co-anglers. The co-angler competition concludes at Saturday’s weigh-in, and the top-10 pros continue competition Sunday, with the winner determined by the heaviest accumulated weight from all four days.

In addition to FLW Live, FLWOutdoors.com offers real-time updates from the water. Simply click on the tournament ID within the “On the Water” banner at the top of the FLW or Walmart FLW Tour home pages.

Activities: Fans are welcome to join FLW for the FLW Expo at the Lufkin Walmart. Come meet Walmart FLW Tour pros, who’ll be on hand signing autographs. Families can enjoy interactive games, receive free samples, drive a Ranger Boat simulator and have a chance to win a $250 Walmart gift card.