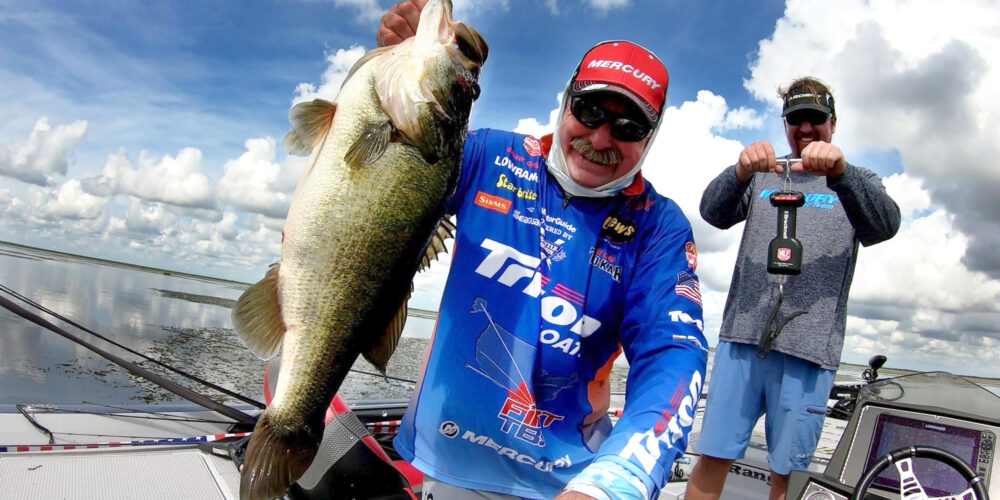 In the wild world of wildlife that is the state of Florida, it’s a sportsman and thrill-seeker’s paradise. That’s why MLF pro Shaw Grigsby has called it home for so many years, and why he loves spending his offseason fishing and hunting right in his own backyard.

In the state known for giant bass and even bigger gators, Grigsby recently had about as memorable a seven-day span as one can have in the Sunshine State.

“I was fishing with JT Kenney and caught over a 12-pound bass and then my 13-year-old grandson and I took down a 11-foot, 1-inch gator (six days later),” Grigsby recapped. “Needless to say, I’ve been pretty sore, but have had a fun couple of weeks.”

Tussling with the 12-Pounder

Grigsby’s mega-productive week started while he was filming an episode of The Fishin’ Show with MLF analyst JT Kenney. The two have fished together plenty of times in the past, but this day was a special one in Palm Bay.

“I was punching a Strike King Rage Menace through some hydrilla mats, just looking for a bite,” Grigsby recapped. “When I set the hook, I originally thought it was only about a 6-pounder. When we picked him up out of the water and he was covered in hydrilla, we then thought the fish was closer to 8 pounds. Once he was in the live well and I got ready to weigh him, I knew he was way bigger than 8 pounds.”

Officially weighing in at a little over 12 pounds, 7 ounces, the monster was one of the biggest bass that Grigsby has ever caught.

“It’s not the biggest, but it was a big ‘ol pig, I can tell you that much,” Grigsby said through his signature chuckle.

The biggest gator of the week was over 11-feet long, but that wasn’t the only one. Add on three more 10-footers, and it was a productive week of gator hunting for Grigsby and his grandson.

“The final day is when we caught the 11-footer, but it was just me and my grandson in the boat without any other help,” Grigsby said. “When you’re trying to take down this massive gator with just me and a 13-year-old, it can turn into a cluster pretty quickly.”

Grigsby says the longest part of the whole ordeal was trying to haul the dinosaur back to the processing area. He said the gator was so heavy that it was impossible to get it completely in the boat.

“Two ratchet straps and plenty of rope later, we finally got it secured enough to take it back in,” Grigsby said. “My grandson has blisters on his hands and I’m exhausted, but it was a fun memory that we’ll be able to share together for awhile.”

Thankful for the (Sort of) Down Time

While his offseason may not sound very relaxing so far, Grigsby has no doubt that this is exactly what he needs to unwind heading into 2021. Although it takes a lot of work, there’s nothing he’d rather be doing.

“Fishing professionally is an amazing job to have, but it can also be extremely stressful during the season,” Grigsby admitted. “To be able to wind down with friends and family in the offseason can really give you a much-needed peace of mind. You can’t take times like these for granted. I’m looking forward to a couple more months of moments like these.”