Myers and Swede Prepared for Championship

GROVE, Okla. — As the TBF/FLW’s High School Fishing National Championship draws near, Arkansas anglers Chase Myers and Cole Swede seem barely able to contain their excitement at getting a chance to compete for the coveted crown.

“We are sooo pumped to fish, we can’t hold the excitement back,” says Myers, a 16-year-old junior at Cabot High School in suburban Little Rock.

Set for April 25-26 here on Oklahoma’s Grand Lake O’ the Cherokees, the championship offers the country’s top 10 teams the opportunity to win acclaim as the best high school anglers in the country and the $10,000 college scholarship that goes with the title.

“Winning would be a huge deal for us,” adds Swede, a junior at Central Arkansas Christian in North Little Rock. “We want to take that trophy back to Arkansas.” 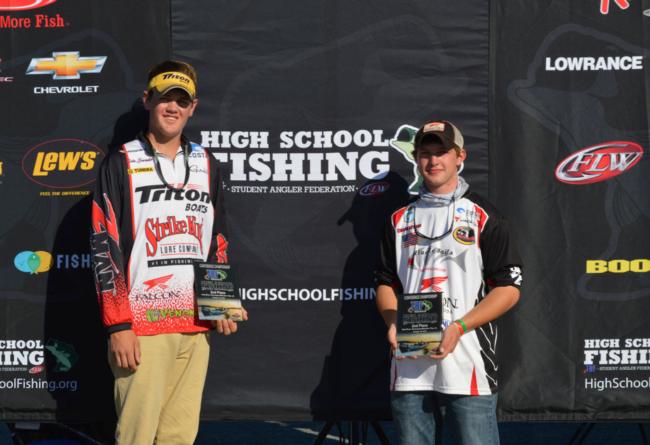 Myers and Swede punched their golden ticket to the championship last October at the Southern Conference Championship on the Red River out of Shreveport, La. Their five-bass limit weighing 11 pounds, 13 ounces put them in a solid second place among 33 teams from seven states.

According to Myers, there was no disappointment at not taking first. “All we wanted to do was qualify, and we did just that,” he recalls.

“We’d had our sights set on qualifying for the national championship since early May [2014],” Swede explains. “We pre-fished the Red in the summer to get a feel for the river and learn how to run it, and that really paid off. While other kids were learning how to navigate around all the stumps, we could focus on how the fishing had changed since our last trip. When we qualified, it felt great that all of our work paid off.”

As the clock ticks down to take-off at the national championship, Myers and Swede are gearing up for a run up the leaderboard. “Our thoughts at the moment are trying to figure out what to do when we get to Grand Lake,” says Myers. “Winning the title would be a huge confidence builder and help further our careers in fishing.”

Myers notes that he and Swede aren’t alone in pulling for the Arkansas contingent. “We’re not the only ones,” he grins. “We have a giant support group encouraging us to do well and bring the title home.”

“I feel really good going into the championship because Chase and I have been doing lots of homework and looking at maps,” says Swede. “Grand Lake is a great fishery and it should be a total smash-fest this time of year.”

Swede also believes the pair’s  collective experiences in the tournament trenches will serve them well at the showdown in Oklahoma. “Chase and I have been fishing together for years, and we fish great as a team,” he says.

No matter where they place, however, both Myers and Swede consider their High School Fishing experiences a success. Myers, a five-year veteran of the program who began fishing with his father when he was old enough to hold a pole in his hand, says he appreciates the opportunity.

“It’s a great way for high school anglers to look at what it’s like to be a professional fisherman, like talking to sponsors and traveling to compete in different states and levels of fishing,” he observes.

Swede, whose father also introduced him to the sport at a tender age, concurs. “It’s a really good way to fish against other high school kids and prepare yourself to continue fishing when you get older,” he explains. “Also, it teaches you to communicate with people, whether you’re talking to sponsors, talking to other kids, or up on the weigh-in stage.”

Soon enough, he and Myers will be onstage again, this time vying for the championship in the national spotlight.