Fired Up For Championship 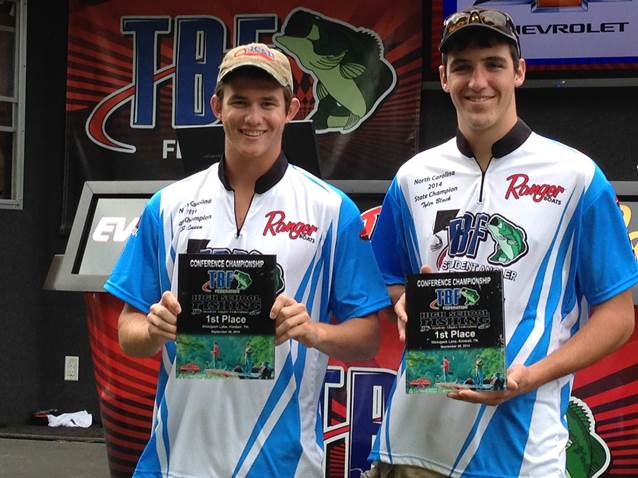 “Going to the championship is a dream come true,” says KJ Queen, one-half of the Tar Heel duo that will battle against the country’s top student anglers April 25-26 on Oklahoma’s Grand Lake O’ the Cherokees.

“I'm definitely excited, too,” adds Tyler Black. “This opportunity is awesome. It’s gonna be a fun tournament, but we’ll have to work hard to get the title back to North Carolina.”

Along with the national crown, a $10,000 college scholarship is up for grabs in the prestigious event. Two-person teams from five divisions qualified by finishing in the top 10 percent of the field at their respective conference championships in 2014.

Black, a high school junior, and Queen, a college freshman (currently attending Bethel University in McKenzie, Tenn. on a fishing scholarship), are representing Bandys High School in their hometown of Catawba, N.C. They earned their invitation to Grand Lake by winning the 2014 North Carolina state championship at Kerr Reservoir, then turning in a stellar performance at the Southeastern Conference Regional Championship on Nickajack Lake out of Kimball, Tennessee, last September.

The talented teammates conquered a tough bite and some of the best young anglers in the South in the 41-boat field to win the conference crown with a 17-pound, 8-ounce five-bass limit. To put their catch in perspective, the conference finals were held immediately after the Tennessee TBF Adult Eastern State Championship. During that event, more than 130 of the state’s top adult bass anglers struggled to put fish in the boat, and none landed a daily catch that could top Queen’s and Black’s impressive basket.

“That was great,” Black says of the conference victory. “I’ve never felt the same rush and excitement with any other win.” He joined the High School Fishing program two years ago and has made steady progress since.  “The tournaments are awesome, and now, as a junior in high school, I’m getting recruited to fish on a college team. It’s a dream come true,” he says.

Queen is a lifelong angler and longtime competitor. His father, Jeff, is his mentor and the pair’s boat captain in the championship.

“I started fishing with my dad and grandpa as soon as I was big enough to ride in a boat,” he recalls. “I won a kids’ tournament when I was six years old, and I’ve been competing in bass tournaments since I was 12.”

In that time, he has fished 100 solo and team events, racking up 30 top-five finishes, 11 of which were first place. Perhaps Queen’s biggest accomplishment to date was introducing his teammate to the sport.

“I got started when KJ talked to me about tournaments,” says Black. “I’d fished before, but I absolutely fell in love with bass fishing.”

As the friends gear up for the showdown on Grand Lake, they’re honing their fishing skills at every possible opportunity, along with scrutinizing online maps and other pertinent data.

If this time is the charm, Queen and Black will proudly carry the trophy home. But no matter where they place, they say the having opportunity to compete in the pinnacle of high school events is already a victory in itself.