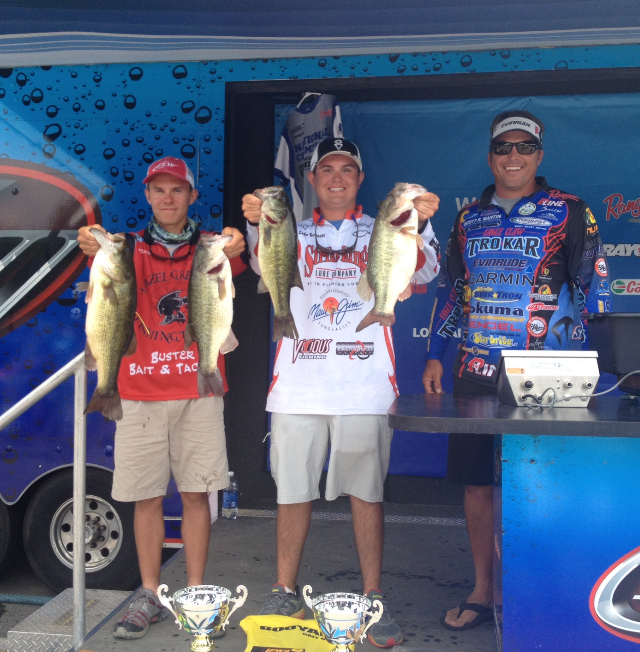 Alabama’s Zeke Gossett and Ryan Shields are anxious to hit Oklahoma’s Grand Lake O’ the Cherokees with everything they’ve got. The duo is one of 10 elite student teams that will clash on the legendary Sooner impoundment April 25-26 in the Student Angler Federation High School Fishing National Championship.

“We’re fired up to give it everything we’ve got and go for the win,” says Gossett, an 18-year-old senior from Cropwell.

“It would be great to represent Alabama well on the national stage,” adds Shields, 18, a senior from Hazel Green.

Though the young guns hail from different High School Fishing programs, they routinely fish a few events together each season.

“We’ve competed against each other over the years, but we enjoy fishing the state finals and opens as a team,” explains Gossett, who fishes for the Pell City High School squad.

They’ve done well together, too. In 2013, they won the Alabama State Championship on Lake Neely Henry, crushing the competition with a 16-pound, 3-ounce limit caught by fishing frogs and flipping jigs in shallow water. The following season, they placed second at the High School Fishing Wheeler Lake Open with a 20-pound, 13-ounce limit anchored by a 5-pound, 15-ounce beauty.

Their Wheeler Lake Open finish earned them a berth in the 2014 Southeastern Conference Regional Championship on Nickajack Lake out of Kimball, Tenn., last September. There, they battled 40 other teams against the brutal backdrop of a tough bite that saw many adult teams, simultaneously fishing the Tennessee Bass Federation Eastern State Championship, struggle to put bass in the boat.

When the dust settled on Nickajack, Gossett and Shields proudly stood in second place with a 15-pound, 3-ounce limit that topped the daily catches of the entire 130-boat TBF adult field. The strong finish also qualified them for a trip to Grand Lake.

“We wanted to win the conference, but our main goal was making the national championship,” says Gossett.

“That was a great accomplishment,” Shields adds on qualifying for the finals. “Grand Lake will definitely be a challenge, but I’m excited because it fishes similar to lakes at home.”

The teammates have been busy scouring maps of the reservoir and researching every bit of fishing information they can find to give them insight on potential winning patterns.

“Practice on the lake will be the greatest factor,” Shields predicts.

Gossett agrees, but believes the team’s greatest strength ultimately is each other.

“We fish really well together,” he says. “We understand each other’s strengths and know how to work as a team to make the most of them.”

In short order, he and Shields will get a chance to pool their talents for a run at the national crown. They fully realize the country’s top young bass teams will be gunning for it as well, and are anxious to get started.

“We’re fired up,” says Gossett. “We’re going to give Grand Lake our best, so whatever happens, there’s no regrets.”