The Tide is Rising for Bryan Schmitt 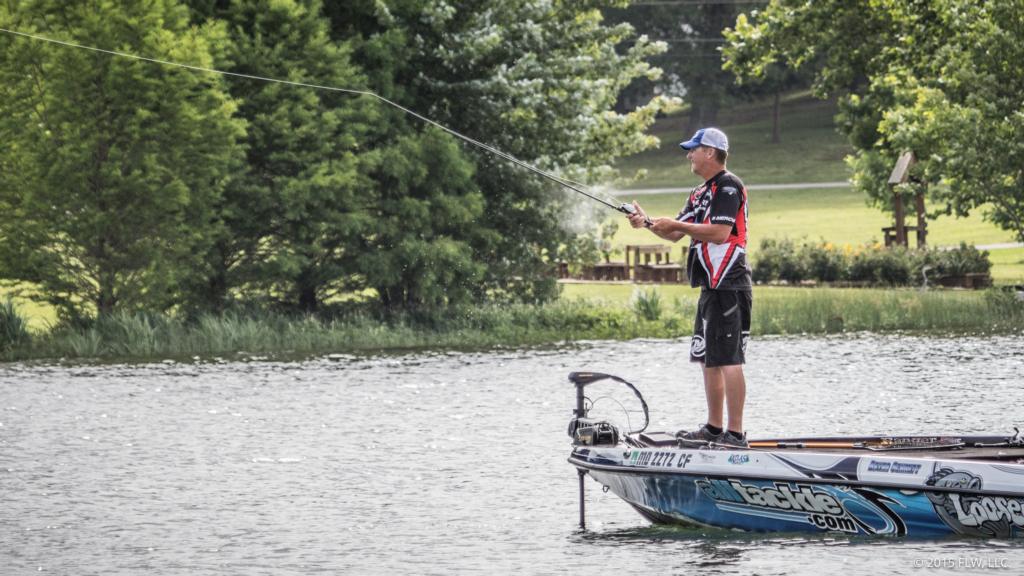 It’s 48 feet long, comes with words of wisdom, and when the Walmart FLW Tour heads to the Potomac River this week, it will be Bryan Schmitt’s biggest advantage.

“My full-time job is as a charter boat captain on the Chesapeake Bay,” Schmitt says. “So I’m usually targeting stripers [striped bass] along with bluefish, Spanish mackerel and croakers.”

Which leads into his advantage: Schmitt’s custom 48-foot Carman boat named “Loosen Up.”

While he certainly doesn’t use that boat on tournament days, Schmitt spends every day from April to mid-December on it, which gives him plenty of hours to practice timing the tides that flow in and out of the Chesapeake. And when it comes to fishing any of the bay’s adjoining rivers – notably the Potomac and James – timing the tides is the key to success.

Not surprisingly, Schmitt has had no shortage of success near home. He won the 2014 Rayovac FLW Series Northern Division event on the James. He also won the 2013 Rayovac event on the Potomac in June, and three months later he won another Rayovac on the Chesapeake, which he followed up that October with a Walmart Bass Fishing League Regional win on the Chesapeake. And that’s just in the last two years. All told, he has 25 top-10 finishes on the Chesapeake and its rivers, with nine victories – all since 2006.

“I spend most of my fishing time in saltwater, but my love is bass fishing,” Schmitt says. “So having that experience with the tides really helps when it comes to bass fishing that area. I usually know certain areas like certain tides. It still changes every year, but once I unlock one area I can run with it.”

With a Tour title and its $125,000 top prize up for grabs on the Potomac, Schmitt is vulnerable to the one drawback that stems from having the kind of success he has previously experienced on tidal fisheries.

While Schmitt’s success on tidal fisheries is remarkable, thus far he’s struggled to get on track in other regions while fishing the Tour. During his rookie season in 2014, Schmitt only cracked the top 100 once and didn’t fish the final two qualifiers.

“I’ll admit, I haven’t had a lot of tournament experience outside of the Chesapeake area,” Schmitt says, “and the few I’ve had have ended with mixed results. That upsets me.”

That frustration follows different paths. Being a charter boat captain, Schmitt uses his electronics every day to find, appraise and fish offshore structure and schools. So he knows he should perform well in offshore tournaments.

The other frustration in 2014 stemmed from finding fish during two tournaments, but not being able to capitalize on them for wins.

“I’ve won enough events to know when I find what I would consider winning fish,” Schmitt says. “I had that twice [last year].”

The one that really gets him was his very first Tour event on Okeechobee. Schmitt found “the mother lode of mother lodes,” and better yet, no other tournament anglers had found it.

Unfortunately, two local shiner guides had, and when a fog delay held up the field, the guides beat him to the spot.

“My co-angler and I sat there watching them stroke 5-, 6-, 7-, 8-, 9-pounders all day in our faces,” Schmitt says. “I’d actually called my wife the last day of practice and told her she may need to buy a plane ticket. After that first day, I’m glad she didn’t.”

For every stumble in a professional career, there’s a lesson to be learned. In Schmitt’s case at Okeechobee, he should have left the spot right away. He learned a hard lesson.

Still, that didn’t taint his first tournament or season.

“It [my rookie season] was the most exciting thing I’ve ever done,” Schmitt says. “From January through June, all I thought about was the tournaments. I was disappointed in how I did, but I’ve learned from it.

“The biggest thing I learned in my first year on Tour was that I can’t always swing for the fences,” he adds. “On my home waters, I know enough that I feel I can always go for the win. You can’t always do that on Tour.”

His performance this year definitely reflects a change in approach. He’s improved from 163rd in the standings in 2014 to his current position in 74th place. Schmitt’s highlights in 2015 include earning a $10,000 check at the opener on Lake Toho and a 16th-place finish a couple of weeks ago at Lake Chickamauga, where he says he lost what might have been the biggest bass of his life on the second day. That fish could’ve been a game-changer.

Still, Chickamauga provided a good payday, a momentum boost and a shot of confidence, which could spell bad news for the rest of the Tour field that’s hoping to come into Schmitt’s playground and beat the odds-on favorite at the finale.

They’ll need to bring their best game, because Schmitt’s experience and lifelong pursuits on the Chesapeake, plus his 48-foot advantage, all chart a course to a place he’s been many times before on the shores of the Potomac – standing on a stage holding a trophy.