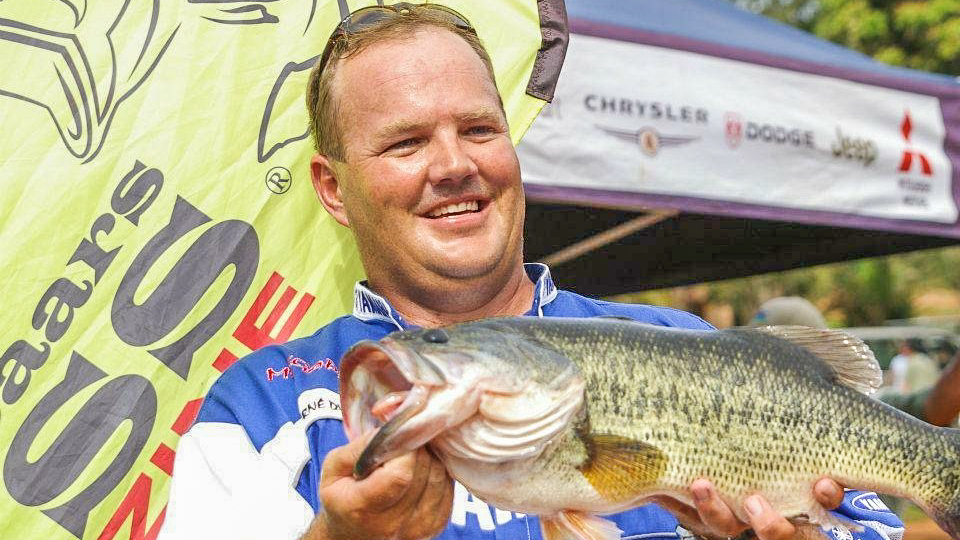 The first thing you notice about Morne Duvenhage when he talks is that he probably isn’t from Georgia, even though that’s his current state of residence. For certain, he communicates with a Southern drawl, except it’s South African, and words such as “far” and “bad” come out of his mouth as “fah” and “bed.”

Duvenhage’s accent is reminiscent of that of Costa FLW Series stick Lionel Botha, which is understandable as both men are of the same rugged Afrikaner stock that helped settle South Africa. Accent or not, Duvenhage speaks the universal language of bass fishing very well, and has found to his satisfaction that bass in the U.S. behave much the same as bass in his native land.

This year, Duvenhage is fishing the FLW Bass Fishing League’s Choo Choo and Bulldog divisions, with hopes of qualifying for the BFL All-American championship. That’s the first of a two-pronged goal. The 44-year-old also hopes to fish the Walmart FLW Tour one of these days.

“I told my wife [Yolande] that it’s now or never for me,” says Duvenhage. “I first came here in 2006 and fell in love with this country. It took a while for it to become economically feasible for us, but we have no regrets. My wife, my two daughters [Dene, 16, and Shimei, 9] and my son [Duwalt, 13] have settled in very well. It’s mind-boggling to me how people you don’t even know make you feel so welcome here.”

The same could be said of his reception into the BFL ranks, though getting equipped to fish the events hasn’t gone so smoothly. For one thing, the used boat he bought soon after he got here a couple of years ago has given him nothing but trouble. Before the first Choo Choo Division tournament of the season at Guntersville, Duvenhage actually rented a boat to fish. Although he expected a fiberglass Ranger with a 200-hp Evinrude, he wound up in an aluminum boat with an outboard of substantially less horsepower.

“I wanted to fish last year and tried to get in as a co-angler, but the waiting list was so long that I couldn’t, and I decided to fish as a boater this year. That, too, is proving to be a test,” he explains.

Still, he finished 58th among 160 anglers in his first tournament, on Lake Guntersville, and likely would have made a check had he caught two more keepers to go with his three bass that weighed 8 pounds, 15 ounces.

Duvenhage, a building contractor who mainly builds convenience stores and groceries, is likely to see better days in BFL events, once he gets his boat problems solved. He has a well-rounded fishing background, and says that one of his assets is that he sticks to his own script and doesn’t try to fish outside what he considers to be his strengths.

Typically, that’s junk-fishing the shallows with a variety of lures and techniques. Duvenhage sees his biggest challenge as learning how to use the sophisticated fishing electronics that most Americans take for granted, and figuring out ledge fish.

He grew up fishing various lakes near his home in the northern part of South Africa, not far from the border with Zimbabwe. Bass weren’t the only targets of his early fishing forays, as various types of panfish, carp and catfish also were targeted. As he grew older, however, he gradually started specializing in bass fishing. 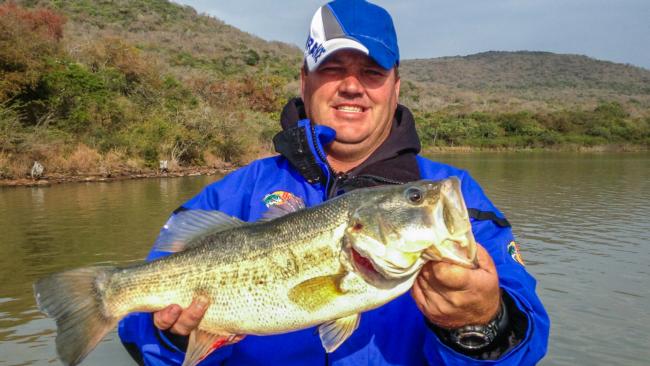 Though Americans often visualize South Africa as a wild and wooly country whose inhabitants spend most of their time dodging lions or other dangers, the bass that inhabit its lakes and rivers are no different from the red, white and blue bass that swim our waterways.

“Years ago, and I don’t know who it was that started it, our sport fishermen took it upon themselves to stock bass in some of our lakes,” notes Duvenhage. “It’s illegal now, because bass aren’t considered native fish, but they’ve taken hold quite well and are self-sustaining. Still, it would be nice if the government did support more stocking. Zimbabwe [formerly Rhodesia] does stock largemouth bass in its lakes, but there aren’t nearly as many sport fishermen there.”

He’ll find no lack of anglers in the U.S. and is glad to be joining their numbers – for more reasons than one. The biggest difference he’s noticed so far between bass fishermen here and in the country of his birth relates to the availability of tackle. Though Duvenhage says that there are lots of tackle stores in South Africa, and Internet-based suppliers are just a few mouse clicks away, ordering fishing equipment and getting it in a timely fashion are two different things.

“It might take weeks or even months to have something shipped from the States,” he notes. “If you watch an FLW weigh-in [Walmart FLW Tour and Costa FLW Series events streamed live on flwfishing.com] and decide to order a lure that one of the pros used, the season might have changed and the bass might be on to something else by the time it arrives in the mail.”

Fishing the wrong bait at the wrong time? How unusual. Actually, Duvenhage should fit right in with the rest of us.