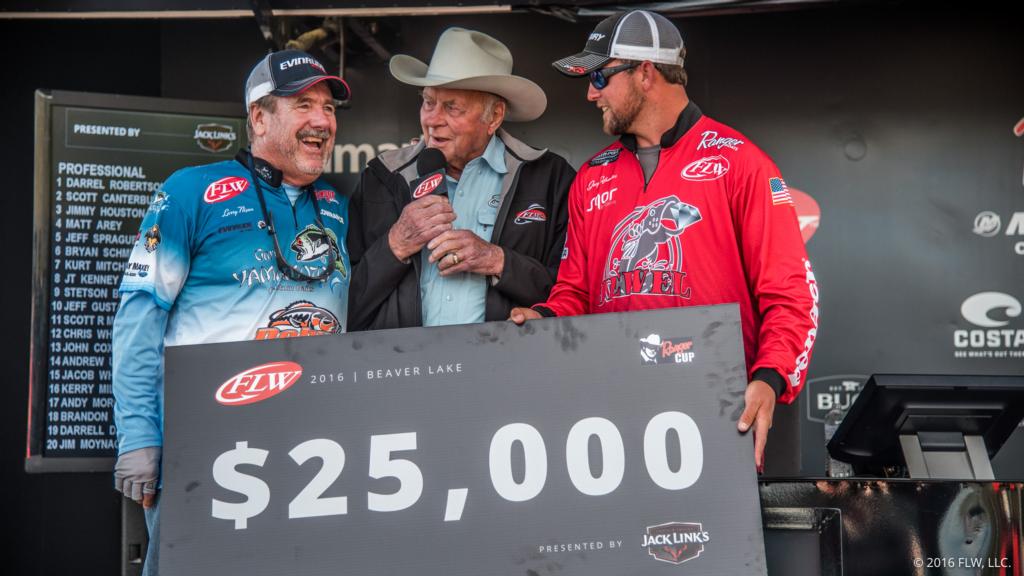 At the Walmart FLW Tour event on Lake Hartwell back in mid-March, there was a little more gray in the top 10 than usual. Five of the top 10 anglers who competed on the final day were more “distinguished” in age.

In line, the generation gap became more palpable as the graybeards grinned with their spirits renewed.

“That’s awesome,” Nixon said. “Us old guys can still win. That gives us all hope. We’re not going to let those youngsters win them all just yet.”

At Hartwell, Cox would eventually edge past FLW icon Clark Wendlandt, dashing the hopes for an old-school clean sweep weekend in pro fishing.

Nixon finished seventh as another opportunity to win went to the young guns.

“That’s all right,” Nixon conceded as Cox held the winner’s check over his head. “Those young guys inspire me to win, too.” 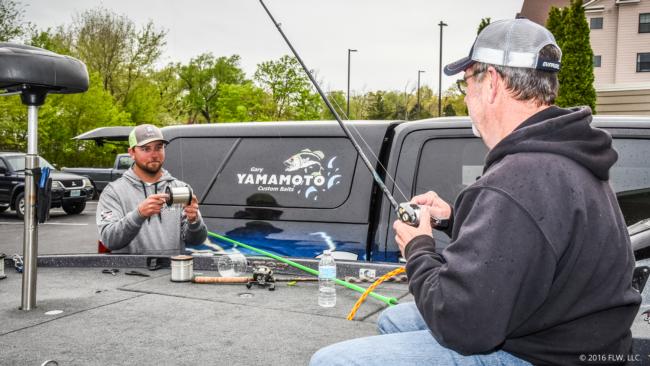 Logic would suggest that those with the most experience and wisdom would prevail in fishing tournaments, but that’s generally not the case, as many anglers in the 20- to 40-year-old age group win a lot of the hardware these days. They do it by buzzing down the bank with dozens of rods on the deck, throwing everything at anything. On the FLW Tour, Bryan Thrift is the epitome of this new style of fishing that could best be defined as junk-fishing perfection.

“I really don’t see how they do it,” Nixon remarks about tournament fishing’s new school. “It’s mind-boggling to me how they manage so many rods at one time. It’s truly amazing, but obviously it works.

“I just can’t do that 20-rods-on-the-deck deal,” Nixon laughs. “I’m not coordinated enough, I guess. When I try to pick up one rod, the others cling to it, and something is going overboard. I just never mastered having that many choices and options in front of me all day. If I have eight rods on the deck it’s far too many for me.”

Nixon recalls bass fishing’s “master’s era” in the ’80s and ’90’s when the pro level of bass fishing was all about mastering one lure or tactic that was an angler’s “signature technique.”

During that era, Denny Brauer and Tommy Biffle were flippers, Shaw Grigsby was a sight-fisherman extraordinaire, Zell Rowland was the king of the Pop-R, David Fritts ruled offshore cranking, Nixon was the worm man, and so on.

Clunn’s win at Palatka was reminiscent of those times. He threw a bladed jig nearly exclusively and was really dialed in on his pattern.

“Back then every superstar in the sport had his ‘power,’” Nixon says, “and we tried to find fish that suited our power or our strengths at every lake. The goal was to narrow a lake down to your strong suit or to find one or two areas and fish the tournament with just two or three rods on the deck. That was the indication that you were ‘dialed in.’ I don’t understand how you get dialed in with 20 rods at your feet.”

Despite the adept skill of the younger generation to zip down a lake throwing a myriad of lures at every piece of cover and structure they see, Nixon feels like he still has a few wins left in the tank.

“Us older guys can still win doing it our way. It’s just much harder to do these days because the young guys are so good,” Nixon details. “Instead of just fishing a core pattern or strength, they are good at tapping into a variety of mini-patterns throughout a day with all those rods on the deck.” 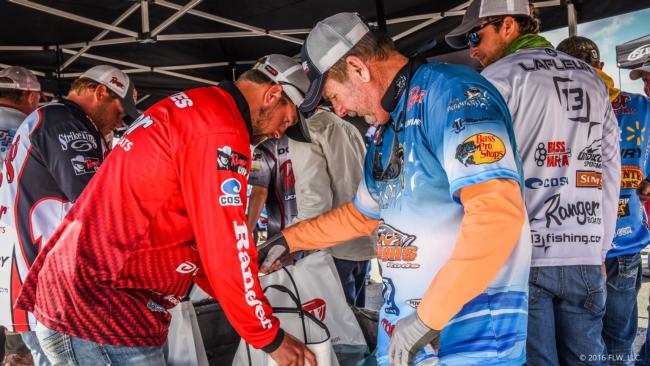 Though Nixon might not be able to adapt to the junk-fishing style, he still keeps close tabs on the youngsters such as Thrift and Cox in terms of what works for them in tournament fishing.

In an effort to keep up with what the millennials are doing, Nixon has recruited one of their own into the back of his boat – Joey Cifuentes of Clinton, Ark. Nearly 40 years separate the ages of Nixon and Cifuentes. At 27, Cifuentes was not yet born when Nixon won the Bassmaster Classic on the Ohio River in 1983. Yet, these two have formed a fishing bond on the FLW Tour that bridges the gap of old school and new school.

“I met Joey through a mutual friend of ours,” Nixon says. “He was in College Fishing at the time and wanted to fish some Costas and maybe the Tour as a co-angler. He only lives about 10 minutes down the road from me, so I carried him to a few Costas and found out he is a pretty doggone good fisherman.”

As the duo traveled and fished together in the Costa FLW Series, Cifuentes ended up winning as a co-angler at Sam Rayburn in 2014. Pretty soon, Nixon was asking him to be his travel partner and co-angler for the FLW Tour.

“When Larry first asked me if I wanted to travel and fish with him, I thought he was kidding, so I really didn’t give him an answer,” Cifuentes recalls. “A couple of weeks later he asked me again, and I was like, ‘You were serious about that?’

“I mean, it’s Larry Nixon,” he adds with a pause. “Who wouldn’t jump at the chance to travel the country and fish with him?”

Cifuentes helps with the driving, hooking up and unhooking of the boat, running errands, and dashing in and out of convenience store for snacks and drinks.

In addition, Cifuentes spends many hours in the back of Nixon’s boat trying new lures and different techniques. This is where the interesting exchange in the new school and old school methodologies takes place between Nixon and Cifuentes.

Cifuentes is more inclined to embrace new lures and technologies.

“We’ll buy a whole bag of new tackle, and Joey goes right to work tying the new stuff on and trying it all,” Nixon says. “That’s what’s so valuable to me. He is so open-minded about what could work. Us older guys like the tried-and-true stuff, and we feel like we have to really understand a lure before we throw it. That’s a throwback to the specialists’ era. But these young guys have no problem ripping some new lure out of the pack, tying it on and using it without any prior knowledge about it. They have open minds, and that’s critical in this game. Tried-and-true is fine-and-good, but the fish are smarter these days, and I know I have to evolve with the new stuff coming out.”

“I think the reason we are so eager to try new stuff is because we don’t have 20 or 30 years of fishing experience,” Cifuentes adds about the anglers of his generation. “And if I can be the first to get on some new lure or technique before everyone else, that’s one of the ways I can close that experience gap and get an advantage.” 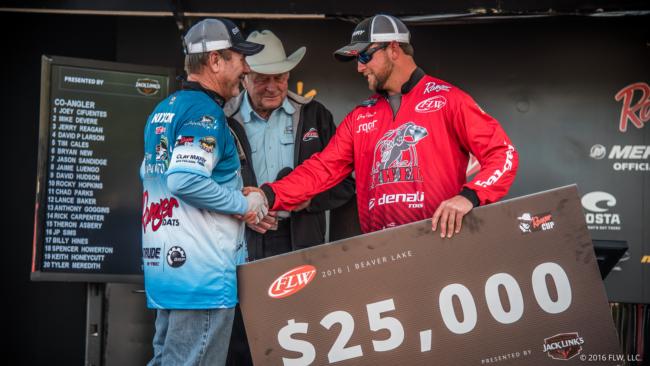 Seeing it in action

Recently at the Beaver Lake FLW Tour event, Cifuentes and Nixon got their hands on some new lures for spybaiting. As soon as the boat hit the water, Cifuentes had one tied on and was experimenting with it to see how it worked.

“At the end of the day mine was still in the box under the lid,” Nixon laughs. “I wasn’t ready to mess with that thing. But watching him fish it and catch fish on it opened my eyes to its uses and applications.”

Now that he’s fishing the Costa FLW Series as a pro, Cifuentes says he has learned a boatload from Nixon that’s helping him in the front of the boat.

“I used to have a bunch of rods and run around all over the place too,” Cifuentes says. “But Larry has taught me a lot about staying put in one spot and really grinding out what’s there instead of always running to look for greener pastures. He has taught me there are usually a lot more fish in front of me than what I might think.”

Cifuentes is also amazed at how keenly aware Nixon is of various changes in the conditions.

“He knows how to relocate fish that have moved from water dropping, or a cold front moving through or the water warming up fast,” Cifuentes says. “He reads conditions so well, and he just knows how to adjust with the fish. There is no substitute for that.”

“That’s just from years of being on the water,” Nixon adds. “And that’s where us older guys still have an advantage: capitalizing on sudden shifts in conditions.”

Clunn’s St. Johns win was a perfect example of that.

“A lot of those guys were sight-fishing on the St. Johns,” Nixon says. “Then a storm blew in there on day three with wind and rain and turned the lights out on those sight guys. But Rick knew what to do. The conditions changed suddenly, and he absolutely capitalized on that change and caught a huge stringer of fish.”

Nixon contends that his generation certainly has the knowledge and experience, but it’s that youthful enthusiasm and open-mindedness that’s hard to maintain.

“That’s where Joey has been such an asset,” Nixon says. “He is so fired up to get out there and get after it every day. It reminds me of how I was when I was that age.”

Though the millennial and the baby boomer have learned quite a bit from each other, there are still little things they disagree on and razz each other about.

“He doesn’t like some of the knots I use,” Nixon laughs. “And he likes a twin tail on the back of his jig, and I’m still a chunk guy. But all in all it has worked out great. We learn a lot from each other, and his youthful enthusiasm helps me keep up with these young guys out here.”

Recently, at the Beaver Lake Tour event, Cifuentes won the co-angler division in a dominant fashion. As he accepted his check, Nixon joined him on stage to celebrate in his young apprentice’s win.

Cifuentes credited at least part of his victory to the lessons he’s learned while fishing with the legendary Arkansas pro.

But since the lessons go both ways, chances are Cifuentes’ exuberance and youth will help Nixon win again too.