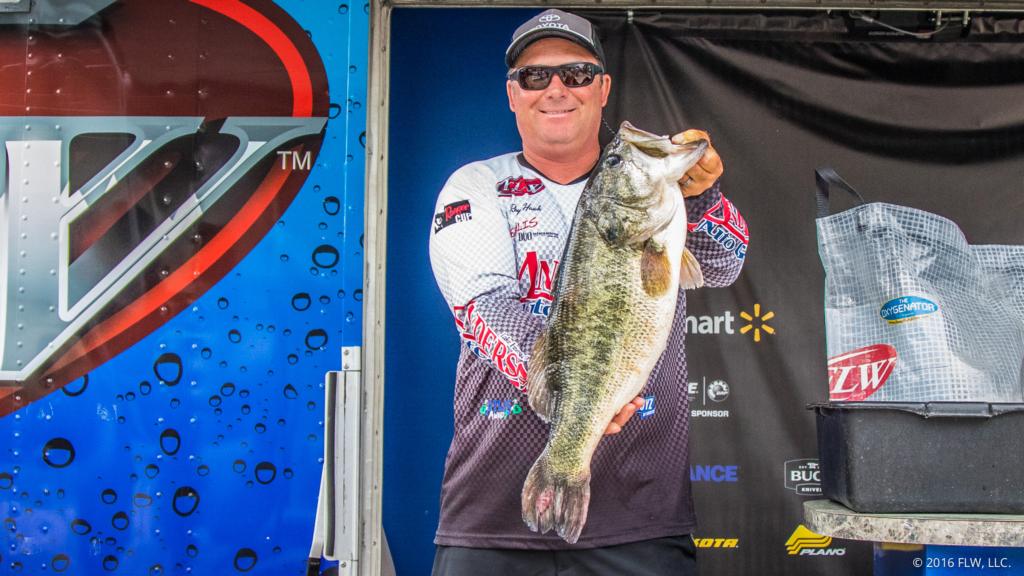 As Roy Hawk prepared for yet another pitch to a bedding 8-pound bass on day two of the California Delta Costa FLW Series Western Division event, he had an epiphany: His entire season would be defined by one fish. Catch it, and he’d make the day-three cut and clinch the Strike King Angler of the Year award for the Western Division. Miss it, and the season would end for the Lake Havasu City, Ariz., pro.

And then, after a 90-minute showdown, the sow-bellied bass flared its gills, and Hawk’s rod loaded up. The title was his.

A couple of key bites

Hawk executed his 2016 Western Division season to near-perfection: three consecutive top-10 finishes, two finishes in the top three, nearly $27,000 in tournament winnings and an AOY title to boot. What made his season a success? It’s simple, according to Hawk.

“When I look back, it was a couple key bites throughout the season,” he offers. “That’s all it was. That made the difference between a good season and Angler of the Year.”

Hawk set the stage for his AOY run at the Western Division opener in February by targeting fish populating Shasta Lake’s off-colored Pit River arm. He felt that the heavier rains preceding the tournament would make largemouths more vulnerable to crankbaits and other power-fishing techniques.

“I’m not as comfortable catching spotted bass in 40 or 50 feet of water,” he explains, “so I just went up the creek and threw a medium-running crankbait in the dirtier water. Almost immediately, I started catching better fish. The pattern faded fast when the water cleared as the tournament went on, and I was running out of stretches to fish. The fish weren’t really replenishing, so I just held on and toughed it out. I caught a 4-pounder on day one that was a big one for that tournament. That was my one lucky bite.”

Hawk’s key largemouth gave him enough weight to make his first top-10 cut of the season. He finished 10th with 29 pounds, 5 ounces.

Clear Lake in April proved to be the pinnacle event in Hawk’s season. Although bass had just started bedding, a cold front discouraged additional fish from migrating to the shallows. The situation ultimately worked in Hawk’s favor as he located a trophy-class bed fish in practice.

“It was still early, but I found one giant during practice,” Hawk recalls. “I could barely see it back behind some really thick wood, and I couldn’t get that close to it. I had to cast through a couple trees to get back in there.”

On tournament day, Hawk crept up to the big fish’s lair, boxing a couple keepers along the way. Anticipation grew with each successive pitch of his Yamamoto Flappin’ Hog. Tree limbs obstructed the view and provided only brief glimpses of the giant’s silhouette. Eventually his rod loaded up, only to yield a small 1-pound male, much to his dismay. Hawk quietly slipped the keeper into his livewell and continued.

“I kept fishing, just hoping the big one was still there,” he says. “Just when I was about to give up hope, she bit and came to the surface. She wallowed on top for a while, which gave me a chance to maneuver her through the limbs. It was incredible.”

Hawk’s improbable catch tipped the scales at 11 pounds, 2 ounces and garnered Big Bass honors. While his tournament was off to a tremendous start, it wasn’t until day three that he started to believe that his season might be something magical.

“On the last day, my engine wouldn’t start for takeoff,” Hawk says. “So, I immediately jumped up on my trolling motor and raced to a little spot around the corner from the launch, hoping to get there before everyone else did. I barely beat some of the college teams blasting off after us, and thankfully none of the top 10 anglers started there.”

Once Hawk settled in, he used a homemade bladed jig to amass a 26-pound, 3-ounce limit – the largest of his tournament – for a three-day total of 70 pounds. The fairytale catch lifted him to second place for the tournament and propelled him into the lead for Strike King Angler of the Year.

Similar to his previous tournament, the Cal Delta event in May presented Hawk with both spawning and postspawn bass. And like at Clear Lake, he boxed a key fish that he caught from its bed.

His 8-pound day-two fish helped him to clinch AOY and qualify for his third consecutive cut.

Hawk eventually finished third. While he utilized a wide variety of lures to collect his tournament haul, the bladed jig again accounted for the majority of his 56-pound, 13-ounce catch.

One of Hawk’s go-to lures throughout the 2016 season was a homemade bladed jig that he helped design with his friend Chris Kinsey. Hawk believes the bait is special for several reasons.

“We designed it exactly the way we wanted it, from hook to head profile and even blade shape. Everything on it is perfect,” Hawk insists. “We utilized a Gamakatsu hook that holds fish better. The blade rotates at really slow retrieves, which separates it from bulkier designs on the market. And, overall, it is a subtler bait.”

Hawk coupled his bladed jig with a Keitech Swing Impact swimbait and Yamamoto D-Shad trailers on Clear Lake and the California Delta, respectively. In order to soften the oscillation of the Keitech trailer, he carefully trimmed the paddle-tail boot into a smaller footprint.

“I really think the trailers made a difference. They both have a small shimmy and not a big wag. I think fish ate it better because the action was more subtle,” he says.

As a veteran angler unintimidated by travel or unfamiliar waters, it goes without saying that Hawk will openly evaluate new opportunities that arise in the future, including a second run at the Walmart FLW Tour if the schedule lines up right with his Western tournaments. He previously fished the Tour in 2010 and 2011.

“I love fishing east and learning new lakes. And I’d love to make it to the Forrest Wood Cup again,” says Hawk, a 2015 Cup qualifier. “That tournament alone can make an angler’s career. You win, and you have a cushion to keep fishing for a while, and that’s what I want to do.”

Fishing the Costa FLW Series Championship is not new to Hawk, either. He’s a six-time qualifier. What excites him most about the 2016 Championship is the venue. Table Rock Lake is one of his favorite waters, and a home away from home of sorts.

“I’ve done well in the past on the Ozark lakes and have some great memories,” he says. “I think the fish on Table Rock will be in transition. If we have an Indian summer, it could be tough. If it is a cooler fall, the fishing could be really good. I believe you’re going to be right up there with about 15 pounds a day. Although I know I will have more competition if the fish are shallow, I’d love to do some cranking. I know there will be plenty of shaky head and drop-shot fish to be found as well.”

Hawk has been a household name within Western tournament circles for more than a decade. While his complete list of angling accomplishments is quite lengthy, here are a few:

For winning the 2016 Costa FLW Series Western Division Strike King Angler of the Year award, Roy Hawk earned a $2,000 prize package that includes paid deposits for the 2017 season. The top 40 pros and 40 co-anglers in the standings qualified for the Costa FLW Series Championship.