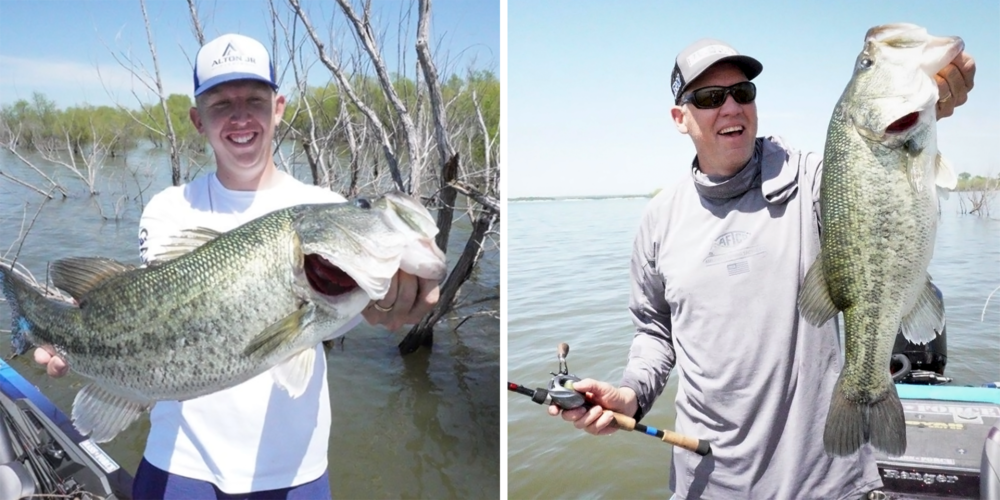 If you ever fished as a young child, you likely went fishing at least once with your dad. Alton Jones Sr. and Alton Jones Jr. spent the majority of Junior’s childhood fishing together – hundreds of days, according to Junior.

However, as the years went on and Junior became a professional angler himself, the quality fishing time between a father and son became more and more infrequent.

“It’s really just the way that our schedules shake out during the year, we hardly ever get to fish together out of the same boat,” Junior explained. “It’s been at least two years for sure since we’ve gotten to fish, just me and him together on a boat.”

“He was my little fishing buddy for so long that I had forgotten how much I missed just being out there with him,” Senior said. “Those were such great times when he was a kid, but now it’s even better to have him out there with me as a peer.”

From Waco to Whitney

Thanks to the break in action coronavirus has caused, the father-son duo found some time to fish together on Lake Whitney, about an hour north of their hometown of Waco, Texas.

Sharing a boat means that someone had to give up the reigns and ride shotgun. This time it was Junior, something he usually isn’t super stoked about. But, since it was with his dad, he didn’t mind too much.

“It’s nice every now and then to play the co-angler role even though I hate not running the boat,” Junior said. “I’m sure my dad would tell you the same thing. Still, I sat back and enjoyed a day of fishing with my dad like the average person would. Being able to just be out there and spend time together is great. I liked seeing him pull out an 8-pounder, too.”

Senior was the one who convinced Junior to head out to Lake Whitney. In the days prior to their outing, Senior said he had found a pretty good pattern that he was hoping they could both take advantage of.

You can see how their full day went by checking out Junior’s most recent YouTube video here.

Learning from Each Other

Although Senior has clocked more hours, days, weeks and years fishing than his up-and-coming son, that doesn’t mean that he doesn’t learn from one of the hottest young anglers on the planet.

“It used to be about me teaching him, but now I feel like I learn more lessons from him,” Senior said with a heavy dose of pride in his voice. “There are a lot of things he does better than I do. He loves to throw a big swimbait and he’s one of the best using a frog that I’ve ever seen. I try to pick his brain about that stuff, and I love doing it. Who wouldn’t want to learn from someone like that?”

The two explain how their conversations mostly consist of old fishing stories and shared experiences on the water. They even help each other dissect what went right or wrong on Lake Fork during Stage Three this season. Still, the majority of their time together is spent enjoying the moment, spending some much-needed quality time together, and of course, trying to get some bites.

“Iron sharpens iron, in my opinion,” Junior said. “I can take a few bits of knowledge from his bag of tricks and he can take some from mine and I think that makes us both better anglers for it. It feels more like a friendship when we’re out there rather than a father-son relationship. I think it works well for both of us.”

“It’s nice having a spring at home and having our schedules cleared,” Senior said. “Now, I wouldn’t want to do it every spring. We’re both ready to get back to it and looking forward to Heavy Hitters next month.”