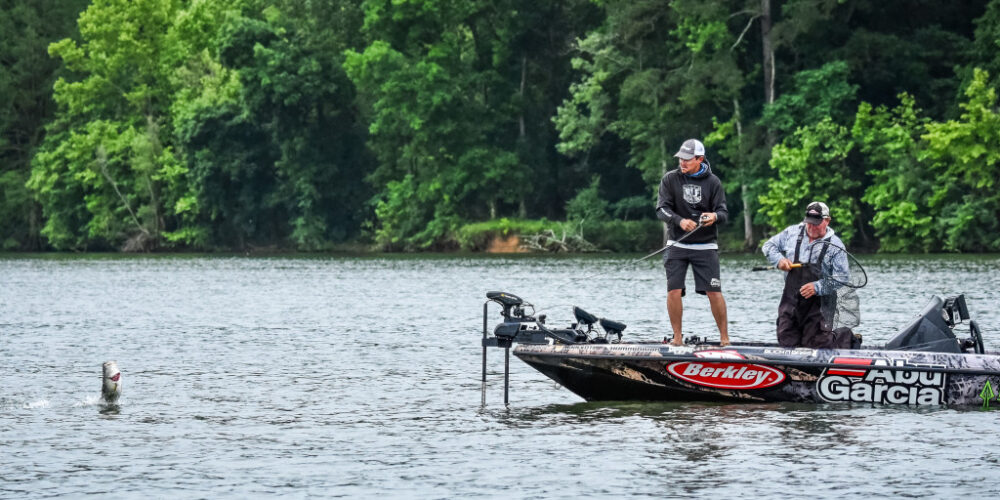 FLORENCE, Ala. – If Las Vegas sports books made betting lines on bass tournaments held on Pickwick Lake, several anglers competing this week at the Toyota Series Central Division tournament on Pickwick out of Florence, Alabama (May 28-30) would have astronomical numbers.

Included in those would be the leader after Day 1, perennial Pickwick powerhouse Buddy Gross, who blasted 24 pounds, 1 ounce to lead the pack of over 150 boaters fishing the first major tournament after the coronavirus shutdown.

But other anglers in the field with stout odds on this impoundment of the Tennessee River would include MLF pros Justin Atkins, Jacob Wheeler and Jason Lambert.

“Everybody wants to get out there deep, graph over them and catch 25 pounds in 5 minutes, I just decided I didn’t want to play that game,” Atkins said. “So in practice, I spent a lot of time scanning for structure in that 5- to 8-foot zone – hard spots, stumps and isolated grass patches.”

Atkins says that the ability to look ahead of his boat with his electronics was key.

“I can look out there and see those features out in front of the boat and make precise casts to them,” he said. “It’s by no means fast and furious. I’m fishing slow and only getting a bite about every 30 minutes or so. I probably only had 10 bites all day. So many people are looking for the quick motherlode these days; I decided to go back to just fishing and see what happens.”

It’s been four years since most of the MLF pros competing in this event fished a tour-level tournament on Pickwick.

“This place is pretty comfortable to me,” Lambert admitted. “I’ve been fishing here for 30 years – basically, starting when I was big enough to fish. I’m glad to be back in a tournament situation in general, but it would be pretty hard for me to pick a better place to restart this season than Pickwick.”

Lambert has notched eight Top 10s here in FLW events, dating back to an FLW Series event in 2008. Atkins isn’t far behind: the Mississippi native (who moved to Florence in 2015) has claimed five FLW Top 10s on Pickwick as well. Neal has racked up two second-place finishes at FLW Tour events held on Pickwick in 2014 and 2016.

“I’ve always said that Pickwick is my favorite place to fish, because it’s an offshore fisherman’s paradise, but it’s not as big as Kentucky Lake,” Neal said. “There’s plenty to look at here and plenty of places to fish. The big question this week is ‘Are there enough schools offshore to go around?’ It’s about two weeks behind. There are fish out offshore, but they’re all on the most obvious community stuff there is, so you’re going to have to find a little something to yourself where you can pull two or three fish a day that you weigh in.”

Day 2 action begins Friday morning with a 6 a.m. takeoff from McFarland Park, located at 200 Jim Spain Drive, in Florence. The weigh-ins will be broadcast at FLWFishing.com each day, beginning at 2 p.m. CST.