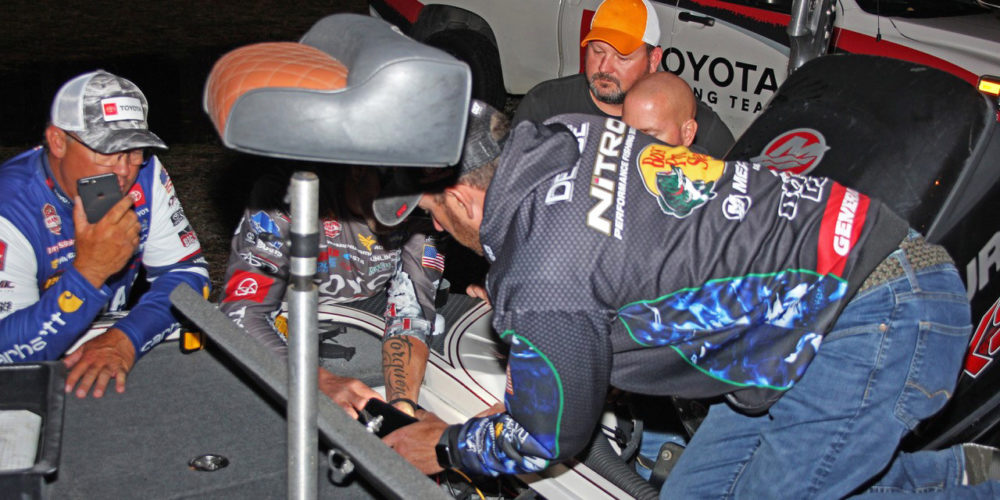 I was walking across a dark and wet parking lot a couple Saturday nights ago at Pickwick Lake when I saw MLF pro Ott DeFoe dang near standing on his head in the battery compartment of a boat he didn’t own. Next to “Otter” was two-time Toyota Bassmaster Angler of the Year, Gerald Swindle. And beside Swindle was his longtime buddy and $2 million career money winner, Terry “Big Show” Scroggins.

The three very well-known pros had just finished making 450 amateur anglers feel like superstars at the 8th Annual Toyota Bonus Bucks tournament registration dinner and rules meeting. That’s where they discovered one team’s chance to participate the next morning was seriously threatened by the sort of marine wiring issues we’ve all dealt with.

“Gerald asked us how our day was in the registration line,” said Derrick Gray, team fishing partner of the boat’s owner, Jason Forsgren. “We told him we’d lost all electrical power, been towed back to the ramp in the cold rain, and might not get to fish. He asked if we could go get the boat back at the house we were renting, and bring it back to the ramp for he and ‘Big Show’ to try and fix.”

Gray, a career Air Force man and Tennessee Game Warden, admits Swindle’s unbelievably generous offer blew him away and covered him in goosebumps of gratefulness.

He and Forsgren were quick to take Swindle up on his offer, and immediately upon their return with the troubled boat, DeFoe jumped in to help Swindle and Scroggins by targeting all the wiring in the battery compartment. Swindle became chief tool supplier, running back and forth to his Tundra’s toolbox, and Scroggins phoned for even more help in the form of hardworking Triton Boats technician, Kevin Davenport.

“Scroggins eventually climbed up under the driver’s console and figured out how to restore power to the outboard. But we had to improvise and limp through the tournament with portable navigation lights and a livewell pump we bought at Academy Sports later that night,” Gray said.

They did more than limp. Fact is, Gray and Forsgren caught an admirable 11 pounds, and finished barely out of the money by dragging a 3/8-ounce jig on the floor of the famed Tennessee River.

Gray and Forsgren are both Toyota Tundra owners, and say they’ll be back for more Bonus Bucks Owners tournaments in the future.

“This was our third Bonus Bucks event to fish together,” Gray said. “We love ‘em because there’s no entry fee, which expands our travel budget so we can bring the wives, rent a house, and make a mini-vacation out of it. If you own a Toyota and you’re registered for Bonus Bucks – fishing in this annual event is a no-brainer in my opinion.”

If it’s true the character of a man is best judged by what he does when nobody’s looking – then I’m glad I was there to see DeFoe, Scroggins and Swindle doing what most might never expect them to do. All I could do was hold a flashlight, marvel at their mechanical abilities, snap a photo, and make notes knowing this kind of goodness deserved to be shared.