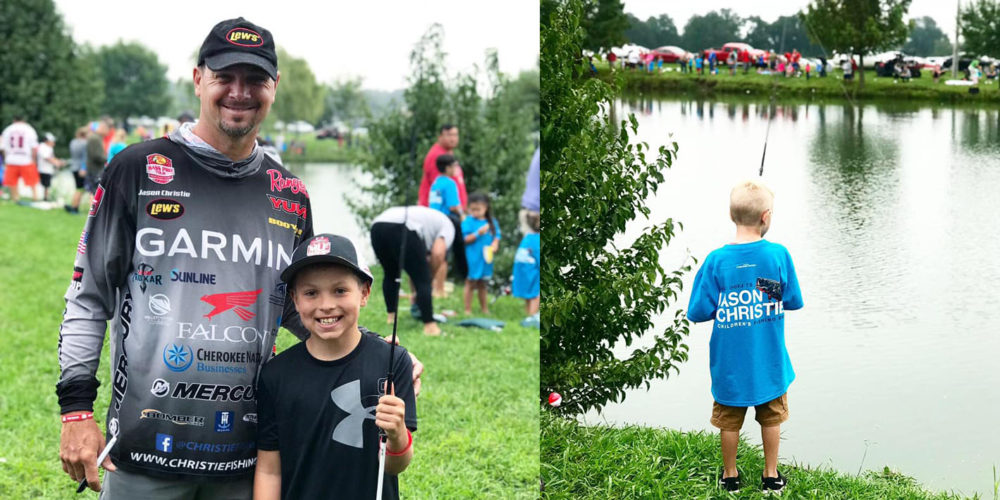 TAHLEQUAH, Okla. – I’m sure there were plenty of people across the country who probably spent their Labor Day fishing, but not many spent their holiday weekend teaching hundreds of kids to fish. MLF pro Jason Christie hosted Jason Christie’s Children’s Fishing Day during a festival for the Cherokee National Holiday over the weekend.

More than 550 children from across Oklahoma and even some from Arkansas met Christie in Tahlequah, Oklahoma to learn from the pro. Christie and the Cherokee Nation teamed up to give away 550 Lew’s rod-and-reel combos and t-shirts to kids who showed up and wanted to drop a line in the water.

“We actually gave out some MLF swag to go along with all of those rods and reels,” Christie said. “The kids really seemed to like that so that was really cool to see.”

Christie said that he’s been involved with the Cherokee Nation for almost seven years and they have been giving away rods and t-shirts ever since. The experience of seeing the looks on the kids’ faces never gets old for the Oklahoma pro.

“It’s just such an awesome day and experience,” Christie explained. “I can’t tell you how many times a kid comes up to me and tells me that they just caught their first fish at one of these events. That’s why we do this, not so that the kids will just fish that day, but in hopes that they will develop a love for fishing that lasts a lifetime.”

Christie said that there’s always a great turnout for this event thanks to the nearly 100,000 people that attend the surrounding Cherokee National Holiday festival. The Mercury pro continues to come back year after year because he loves to see the difference it can make for some of the children.

“Some of these kids that come to this event don’t have a whole lot,” Christie said. “So, it’s really a great feeling to see them get something, catch some fish and have a good time. It’s what makes doing it worthwhile.”