Mark Davis: From a Fish House on Lake Hamilton to the Bass Fishing Hall of Fame 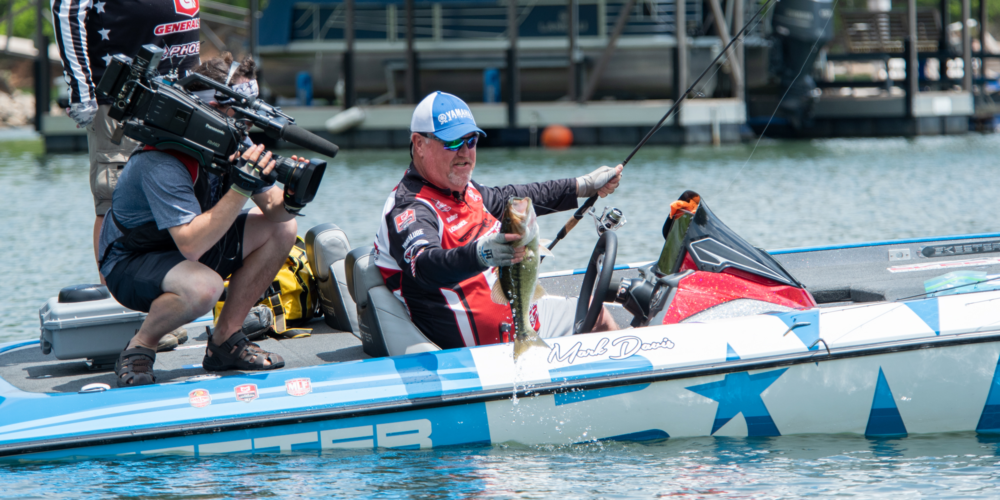 MLF veteran Mark Davis landed a Bass Fishing Hall of Fame induction thanks partly to a simple question he was asked as a teenager. Photo by Garrick Dixon
October 2, 2019 • Joel Shangle • Angler News

To 13-year-old Mark Davis, the moment seemed like he had stumbled onto the pot of gold at the end of the rainbow. Standing in the fish-cleaning house at Chambers Landing on the lower end of Lake Hamilton in Hot Springs, Arkansas – where he had just finished cleaning an afternoon’s worth of crappie – the young Davis listened in nervous disbelief as one of Hamilton’s resident crappie guides acknowledged him with a question.

“Hey Mark, you ever thought about guiding?”

Just that. A simple question: “You ever thought about guiding?”

“I didn’t even think that old guide knew my name and I really respected him, so it made me pretty nervous that he was even talking to me,” Davis jokes.

That question would eventually lead to a four-hour guide trip, which would then lead to an unexpected payday. Little did Davis know at the time, that question would also start him along the way on a four-decade journey to the Bass Fishing Hall of Fame.

When George Mark Davis is inducted Thursday into the 17th class of the Hall of Fame, the audience will applaud him for the outstanding accomplishments he’s achieved in a 33-year career as a professional bass fisherman.

Three-time Bassmaster Angler of the Year. Bassmaster Classic champion. Winner of more than $2.3 million and one of the pioneers of Major League Fishing. It’s a career deserving of a Hall of Fame nod, and one that Davis is dearly thankful to have.

But every Hall of Fame career starts somewhere, and for Mark Davis, it started on the lower end of Lake Hamilton, in a fish-cleaning facility that has been long since been demolished and replaced by condominiums.

Davis responded to the old guide’s question politely – as you’d expect from a well-mannered, respectful boy from the South – but enthusiastically: “Well, yes sir, I guess I’ve thought about guiding, but I don’t have a clue how to do it.”

The guide’s response was as straightforward as his first question: “Be down here Saturday morning at 7 a.m., have your boat gassed up and ready to go, and take this little retired couple fishing. I usually take them, but I’m booked. They’ll want to go crappie fishing from 7 to 11, so you just help them catch fish, be safe, and clean their fish for them when you’re done. They’re going to pay you $40 for this trip. And that’s really all there is to it.”

“We limited out, had a great day, and just caught a whole bunch of fish,” he says. “At the end of those four hours, I handed the old guy his fish, all filleted nice and clean in a bag, and he shook my hand, and handed me this wad of cash. He said ‘Thank you’ and turned to leave. As he was leaving, I counted four $20 bills – there was $80 there! So I told him ‘Sir, stop, you’ve overpaid me!’ And I’ll never forget this, he turns to me and says ‘No, son, that extra is our tip.’

“And that was the end for me. I was hooked. That was my first idea that I could make money taking people fishing, and from then on, that’s all I ever wanted to do. That was the life for me.”

And it was indeed, literally, for the next 19 years. Davis earned his living from the early 1980s until 1995 as a full-time guide on Hamilton and nearby Lake Ouachita, logging 175 to 200 days a year leading other people to fish. He picked up tournament fishing along the way, too, cashing multiple checks for $5,000 to $10,000 fishing B.A.S.S. Invitationals, Megabucks and Top 100s, but locating fish for clients was what kept the lights on in the Davis household until Mark won his first professional event.

That first win just happened to be the 1995 Bassmaster Classic on High Rock Lake in North Carolina, a $50,000 payday that finally put Davis’ guide career out to pasture.

“I had a really hard time giving (guiding) up,” Davis admits. “I remember in 1994 telling my wife Tilly, ‘This guiding thing is holding me back in my bass fishing,’ but guiding represented security. I was nine years into my bass fishing career at the time, and we decided that year that I should start pre-fishing and really preparing for tournaments. I had a great year, won the AOY in 1995. But I still guided every day I was home to make ends meet. I finally gave up my guiding when I won the Classic.”

Getting Back to the Guide Life

It’s a compliment that stumps Davis momentarily, and the follow-up question causes him to pause even further: “What’s your fishing style, Mark? What are you best at?”

When he finally answers, it’s as straightforward as that old guide’s question in the fish house.

“Everybody always wants that question to be about a technique or a lure, but to me, it’s more about finding fish,” he says. “My whole philosophy has always been about finding fish. I’ve always prided myself in that, and it’s what I’ve always strived the hardest to do. The wrong lure in the right place is a lot better than the right lure in all the wrong places. Finding a big group of fish is the way I like to fish the most, and it doesn’t matter what the bait is.”

Just like a guide trip on Lake Hamilton, Davis is reminded, a remark that makes him laugh a little.

“You know, I guess I hadn’t thought about it exactly that way, but you’re right,” he says. “Back in those days, that’s how you did it: you went out there and figured out how to find fish. Being a guide for so many years was a great teacher, and I learned a lot. I do have guiding to thank for that.”