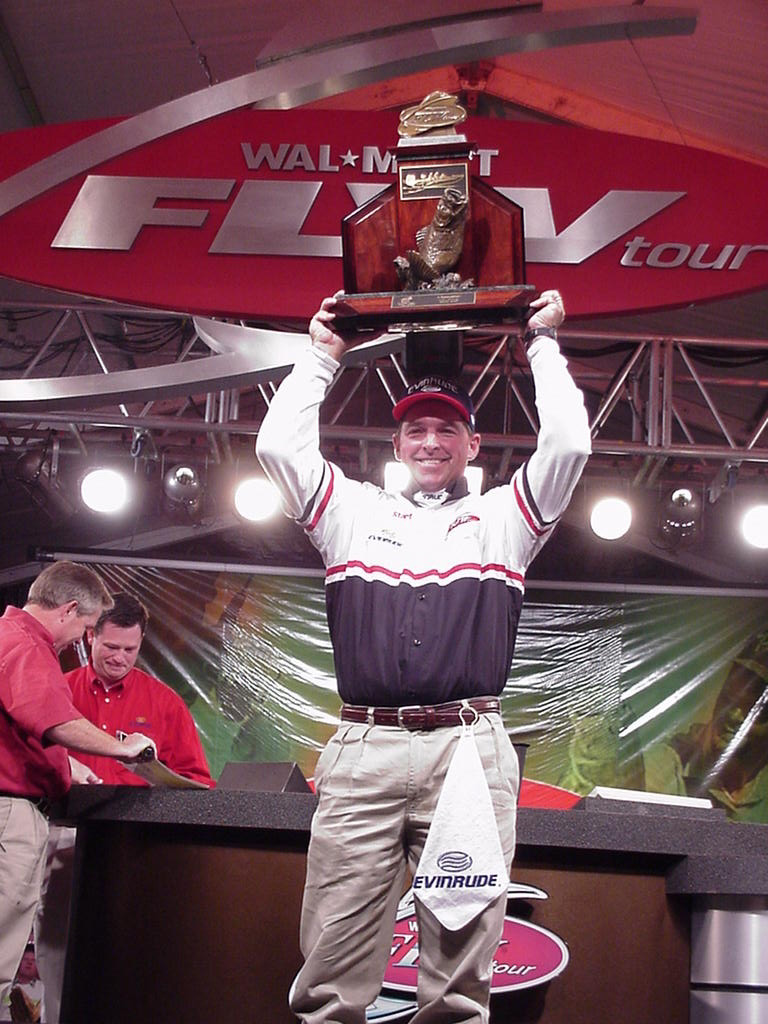 SHREVEPORT, La. – Action starts today at the Wal-Mart FLW Tour Championship in Shreveport as the top 50 pros and top 50 co-anglers from the 2000 FLW season make their assault on the Red River. The championship culminates an FLW season where fans saw continued domination by the old guard as well as the triumph of the new.

What they saw was a season of true champions.

At the first stop on Lake Okeechobee, Fla., local pro Steve Daniel of Clewiston showed he knows the big bass in his home waters better than most. He took home the trophy, making it his third FLW Tour win, a record he tied with David Fritts of Lexington, N.C. Previously, Daniel won the second tour stop in 1996, again on Lake Okeechobee, as well as the inaugural FLW Championship, on Lake Lanier, Ga., that same year.

At tour stop number two, Scott Martin, also of Clewiston, led the youth movement at the FLW’s first-ever event held on the Pascagoula River in Biloxi, Miss. The cool-headed 24-year-old, son of fishing legend Roland Martin and 1999 Co-Angler of the Year, made hundred-mile runs across the imposing waters of the Gulf of Mexico to bring back impressive catches. Said Martin, “This is such an adrenaline rush. You run all the way over here and you don’t know if you’re going to catch one.” He caught enough to take the win, even edging his father, who placed sixth, out of the final round.

At tour stop number three on Lake Murray, S.C., Clark Wendlandt of Cedar Park, Texas, put on a sight-fishing clinic that showed why he would eventually win 2000 Angler of the Year. With the bass on the beds, the plucky Wendlandt hooked his way to a win with his tenacity and ability to conquer the shallows despite some shifty weather.

The next stop, the Wal-Mart Open on Beaver Lake, Ark., marked the start of the run of Clunn. Rick Clunn of Ava, Mo., already a bass fishing legend, cinched the win and $200,000 with a dominating effort in Arkansas history’s richest pro bass tournament. Using crankbaits 90 percent of the time, he worked the low water levels to near perfection.

Clunn’s run continued at tour stop number five on the Mississippi River in Memphis, Tenn., but he fell just short of back-to-back wins, placing second behind fellow old-school angler Gary Klein of Weatherford, Texas. The two pro bass heavyweights battled mightily amidst river conditions suitable for a clash of the titans. While heavy winds and spine-crunching rough water on the big Mississippi made the runs a full-contact sport, the two ventured heartily into the elements to bring back huge stringers of fish. In a showdown that went to the very last fish weighed, Klein narrowly defeated the hot Clunn and successfully defended his 1999 victory in Memphis – the first angler ever to do so on the FLW Tour.

At the final regular-season stop, the Forrest Wood Open on Pickwick Lake, Ala., Clunn bounced back and picked up his second win of the year. The win sparked talk of Clunn’s Tiger Woods-like domination on tour and made him the all-time leading money winner on the FLW Tour with $677,100. Said Clunn, “I really try to win every tournament I enter, and you’ve got to do more than just talk about it. It’s just a matter of fulfilling potential.”

Looking ahead to this week’s championship on the Red River, look for Angler of the Year Wendlandt to stick to his strength: fishing shallow. “I’ve got a good game plan,” he said, “but you can’t really tell how it’s going to turn out until you get out there the first day. I think the overall fishing here is fairly tough, but I feel pretty good and I’m going to concentrate on two or three areas.”

The 2000 Co-Angler of the Year, David Hudson of Jasper, Ala., likes his prospects on the Red River from the back of the boat. He points to the abundance of timber along the bank as the key to possible victory. “It really gives the amateur a good advantage,” he said. “With the timber, there will be plenty of fishing for everybody.” And Hudson is looking to change the methodical, consistent fishing technique that earned him the Co-Angler of the Year title into a more aggressive approach in hopes of earning that elusive first-place check. He plans on replacing his smaller finesse worm baits with larger spinner baits and jigs to attract to larger quarry. “I’m going to do my best,” he said. “All year long, I’ve fished kind of conservatively, but I’m going to go for it this time.”

The FLW Championship first-place pro cash prize of $250,000 is the largest prize in competitive fishing. Competition consists of three rounds over four days, with the Co-Angler Division finishing Friday and the Pro Division finishing Saturday. The event is presented by Citgo.