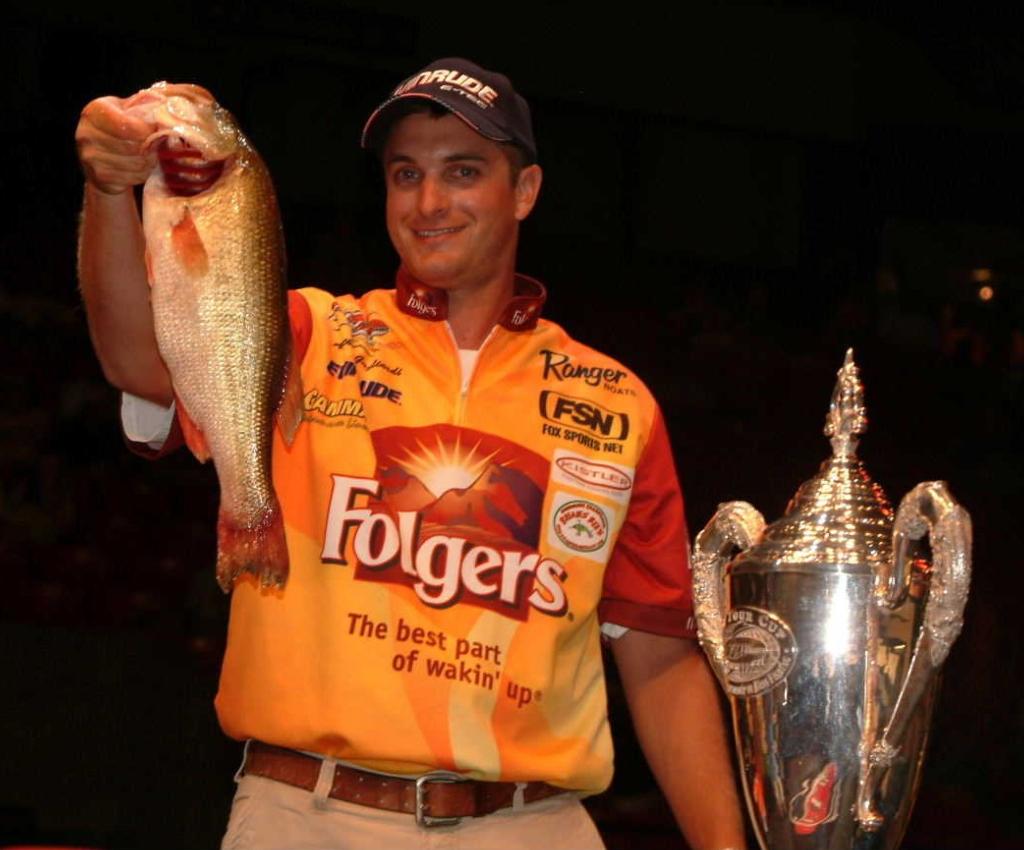 BIRMINGHAM, Ala. – Ishama Monroe had it easy; he ran into the freight train that is Anthony Gagliardi and never had a chance. The pros who felt the full effects of the day-two brackets at the 2006 Wal-Mart FLW Tour Championship were the ones who caught contending amounts of fish and still missed the cut. Alton Jones, Gabe Bolivar and Darrel Robertson all lost by just an ounce or two, and even Alvin Shaw, Tom Monsoor, Wesley Strader and Jim Moynagh were left shaking their heads after losing despite catching over 20 pounds of bass in the opening round at Logan Martin Lake.

Gagliardi stumbles onto another good limit

As the fishing stayed as hot as the weather in the second half of the opening round – 44 out of 48 pros caught five-bass limits Thursday – so did Gagliardi, the pro out of Prosperity, S.C., who caught the leading limit on day one. Gagliardi added another limit weighing 12 pounds, 13 ounces to his Wednesday total of 15-12 and finished the first two days with a total weight of 28-9, outdistancing the rest of the field and pretty much demolishing his bracket competition, Ishama Monroe of Hughson, Calif. Monroe caught a limit Thursday, but finished the tournament with a weight of 8-11.

Gagliardi admitted Wednesday that, with his lead, he wasn’t planning on catching a whole lot of fish Thursday, but it didn’t quite work out that way. His 12 pounds, 13 ounces was the fourth-heaviest limit of the day.

“I caught a limit early, which was my goal in the morning. I didn’t want to catch fish like that, but I didn’t want to waste any time, either. So I went out practicing and ended up catching a few,” Gagliardi said. “The thing is, I didn’t fish any of the places where I caught them yesterday, so I don’t feel bad about catching those fish.”

Gagliardi will face Danny Correia of Marlborough, Mass. – who totaled 17 pounds, 9 ounces – in the second round.

Yelas consistent, saves some for later

Coming in with the second-heaviest two-day total and the third-heaviest limit of the day was Jay Yelas of Tyler, Texas. His 13 pounds, 14 ounces Thursday combined with his Wednesday catch of 13-1 for a total of 26-15, which defeated Mike Hawkes of Sabinal, Texas (19-7) by 7 1/2 pounds.

“I did the same thing as I did yesterday. I fished a Berkley Power worm and a jig mostly around brushy boat docks,” Yelas said. “I caught those fish fairly early, so I was able to save a lot of my water for the next two days.”

Yelas stressed the need to sandbag in this event where you never know what will happen with the brackets. He will face off against Thanh Le of Davie, Fla., (20 pounds, 13 ounces) in the second round.

“You’ve got to save some fish for Friday and Saturday,” Yelas said. “Thanh only had 8 pounds, (13 ounces) today, but I won’t feel comfortable until I get close to 13 tomorrow. And that’s hard to do when you fish all day and you just get 10 bites.”

The 2004 FLW Tour champion at Logan Martin Lake, Luke Clausen of Spokane, Wash., made another statement Thursday by catching the second-heaviest limit – 14 pounds, 3 ounces – and finishing the opening round with the third-heaviest two-day weight, 26-10. He advanced out of one of the tougher bracket matchups – against Tom Monsoor of La Crosse, Wis., who caught a solid 20-1 over the first two days – and must now face off against an equally tough Shinichi Fukae of Mineola, Texas, in the second round.

Clausen caught his fish Thursday by fishing docks, but said he’s doing something a little differently than he did two years ago when he won. What that is exactly, he’s not telling yet.

“I’ve been trying to run a pattern that’s a little different,” he said. “It only works in one out of seven or eight places that I stop, but I had a great day. I went prefishing in pretty much all new water.” 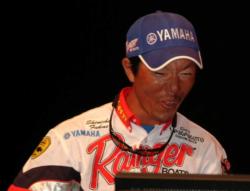 While Clausen clearly dominated this event at Logan Martin in 2004, leading it wire-to-wire, he’s not thrilled about the bracket matchup he faces tomorrow. Fukae caught 23 pounds even in the opening round and edged out Jones by an ounce. Clausen knew he had to catch a bunch of fish Thursday because Monsoor was strong with over 20 pounds himself. With all four competitors catching more than 20 pounds, this is clearly the toughest bracket of the tournament.

“I hate this bracket deal; it’s so tough,” Clausen said. “I’m going to have to go out and catch as much as I can, and I don’t know how many fish are left. What I’m doing may not work, and I could go out tomorrow and not catch even 10 pounds.”

Fukae, too, admitted that he pretty much burned up all of his fish taking out Jones, and he all but handed tomorrow’s bracket competition to Clausen.

“I was fishing a jighead on docks and brush piles, same as at Beaver (Lake),” Fukae said. “Yeah, I used up my fish, so maybe he (Clausen) won. But I had fun.” 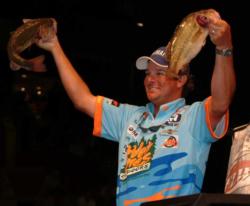 While Alvin Shaw of State Road, N.C., caught one of Wednesday’s leading stringers, he couldn’t respond to the bomb that Brennan Bosley of Benton, Ark., dropped on him Thursday. Bosley caught the day’s heaviest limit – 17 pounds, 9 ounces – totaled 25 pounds even for the opening round and came back to eliminate Shaw, who totaled 21-7.

“I really didn’t do anything different today,” Bosley said. “I kept my flipping stick in my hand, kept throwing a jig and got seven or eight bites. You saw my best five.”

Bosley said he threw a “little, homemade, brown, 5/16-ounce jig with a Paca Craw trailer” to catch his bass, adding that shad moving up into the backwater he fished Thursday probably attracted bigger and better fish. Still, he wasn’t patting himself on the back just yet; he will face Dion Hibdon of Stover, Mo., in the second round. Hibdon won the Bassmaster Classic at Logan Martin Lake in 1997.

“I feel good, but Dion’s a pretty tough competitor, and he knows this lake probably better than anybody,” Bosley said. “And he’s won a big one here before.” 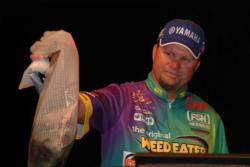 Ray Scheide of Russellville, Ark., caught the fifth-heaviest weight in the opening round – 23 pounds, 15 ounces – and he pretty much needed all of it in defeating Wesley Strader of Spring City, Tenn., who caught 20-1.

Scheide caught 15 pounds, 1 ounce the first day and led Strader by over 6 pounds, but Strader rebounded Thursday with 11-1 while Scheide caught just 8-14.

“I didn’t take Wesley lightly, but I did kind of manage my fish a little bit today,” Scheide said. “And he almost pulled it off.”

Scheide said he caught his early largemouths on a Berkley Power worm in the shallows and didn’t catch any keepers on his deep-water area in the current Thursday. That was mostly because there was no current when he went there.

“At least I know for tomorrow that when the water’s not moving, I’m not moving,” he said.

Scheide will face off against Chip Harrison (19-1) in the second round.

Forget the matchups decided by a pound; there were several nailbiters decided by mere ounces, and the disbelief showed on the faces of those on the losing end.

“That 1 ounce plagues me,” he said, staring at the weigh-in scale. “I guess I’m just good at coming up 1 ounce short.”

The Pro Division has been cut in half to 24 competitors, and weights have been reset to zero. They will each face off in one-day, head-to-head competition within their brackets to determine the top 12 advancing to Saturday’s final round.