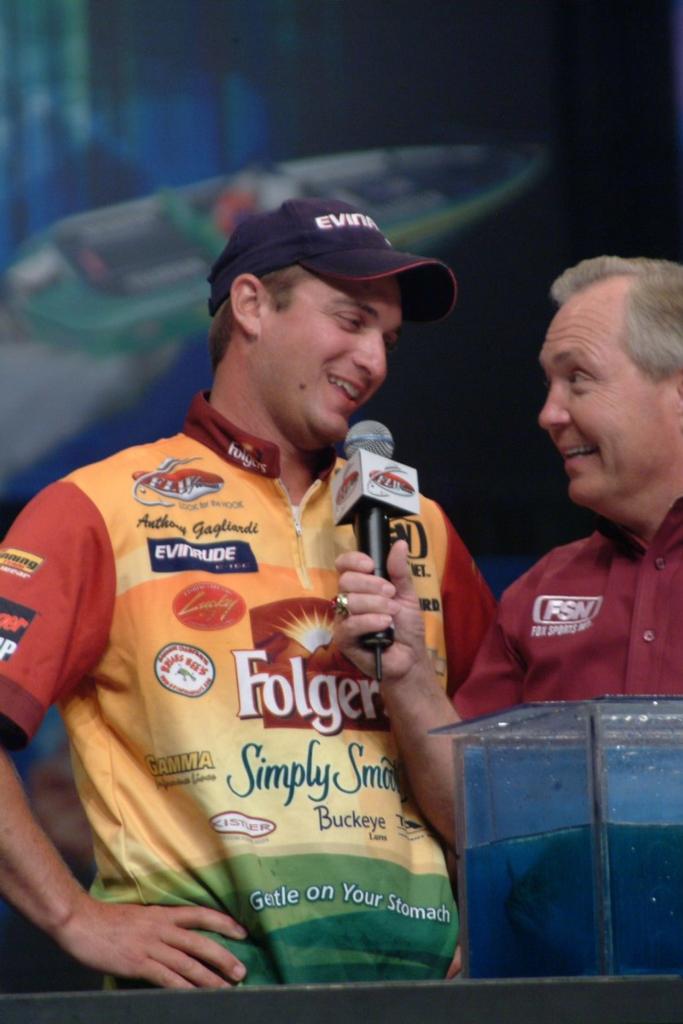 Fourth time’s a charm? … The Forrest Wood Cup top-10 list is pretty stacked, with two former Anglers of the Year and two former Wal-Mart FLW Tour champions. One of those former AOYs, Anthony Gagliardi, is competing in his fourth consecutive championship top-10. While the Forrest Wood Cup is an event that encompasses six tournament trails, its predecessor is the Wal-Mart FLW Tour Championship, and Gagliardi made the finals in 2004 on Logan Martin, in 2005 on Lake Hamilton and in 2006 on Logan Martin. “The time of year has a lot to do with it,” Gagliardi said in explanation of his championship prowess. “I like fishing in the summertime. Plus, I like the lakes.” However, Gagliardi’s highest finish so far has been third place. “Maybe I’ve been waiting for the million,” he said of a potential Cup victory after four good chances. “I don’t have a lot of places, but the fish I’ve been catching are big.”

Thrift makes it official … He earned the title last month at the Wal-Mart FLW Tour season closer on the Detroit River, but today it was made official – Bryan Thrift is the 2007 Gain Rookie of the Year. This year on the FLW Tour, Thrift scored a 28th-place overall ranking after beginning the season with a runner-up finish at the opener on Lake Travis. He made the top 10 again in April on Lake Norman, virtually cementing his rookie of the year status. He’s proving his mettle again this week with yet another top-10 performance, this time with $1 million on the line, as the day-one leader ended today’s competition in third with a two-day catch of 25 pounds, 12 ounces. “I just try to keep an open mind, fish hard and just catch five every day,” said Thrift of his rookie strategy this season. “It’s not hard to catch one every hour and a half – but it took me longer than an hour and a half to catch them today.” Indeed, Thrift’s day-two, 10-pound, 5-ounce catch was made up of only three bass. … Should Thrift win on Sunday, it would mean he got married, scored a Rookie of the Year trophy and earned $1 million in only 15 days.

A giant falls … Hot Springs fishing fans mourned the fall of their hero Mark Davis today, as the pretournament hometown favorite fell from seventh to 12th, just outside of the top-10 cut. Davis caught a 12-pound limit yesterday to get off to a solid start and strike fear in the hearts of his fellow competitors, but today he came up short, bringing in only three bass worth 7 pounds, 4 ounces to drop out of the top 10. “There is no excuse for me not to have five fish on this lake,” Davis said. “I blew it today.” Davis ultimately lost out by just less than 2 pounds, a weight that would have easily been achieved had he boated a limit. When asked if he had any advice for the 10 pros who would be hitting Lake Ouachita tomorrow, he joked, “After this, they probably don’t want my advice.”

Friends in high places … Though Davis may be out of the running, his practice partner David Hudson continues his reign atop the co-angler leaderboard. Hudson has caught 18 pounds, 7 ounces of bass from the back of the boat the last two days to lead his division by a solid 3-pound, 10-ounce margin. He has been candid on stage about practicing with Davis, but how did he get to be so lucky? Turns out the Davis/Hudson relationship is one that dates back a few years. “It really started in 1993,” Hudson said. “I drew out with him at a tournament, and we had a good day and became friends. We’ve roomed together and practiced together ever since.” Fourteen years later, that chance drawing stands to pay off large for Hudson should he become the next Forrest Wood Cup co-angler champion. “It greatly helped me,” he said of his practice time on Lake Ouachita with Davis. “I practiced six days with him, and we went over every scenario. He told me every bait to throw.”

Suggs surges … Davis may have gotten the most pretournament ink as far as local favorites, but Scott Suggs has proven to be the cream that has risen to the top this week, as the Bryant, Ark., pro is currently second with a 26-pound, 8-ounce two-day catch. His enthusiasm for his success here was genuine and contagious, and it was difficult for Suggs to contain his emotion about fishing for $1 million so close to home. “I’ve fished here for 38 years,” he said. “I know every tree on the bank.” While he said the elimination of a threat such as Davis is certainly a load off his mind heading into the final two days, it does mean he will attract all of the considerable local attention on the water. “It would take some of the boats away from me,” he said of the prospect of Davis also making the top 10. “My partner today said (the boats) sounded like the cavalry was coming.”

Lucky fish … Yesterday, we reported that Jack Wade’s co-angler had caught one of Wade’s bass in mid-air, only to lose his footing in the boat and toss it 15 feet off the other side. While that made for a good story to tell, it also made Wade’s day-two lead even sweeter, since he made it to the top with the help of that very same bass. “I think I got that fish that my partner threw out the side of the boat yesterday,” Wade said. “It was in the same area.” Wade’s five-bass catch today weighed 16 pounds, 14 ounces, the heaviest stringer of the tournament so far. That limit – and that fish – represent the tossing aside of all the troubles Wade has had in his tournament career. As the pro leader, he is now first in line for the $1 million top prize. “People wouldn’t believe what I’ve been through,” he said. “I’ve missed five $10,000 checks by 4 pounds and change.” On Sunday, he might just make $10,000 look like change.

Mental games … Though it is certainly exciting, don’t let the pros fool you into thinking that fishing for $1 million isn’t daunting. It’s the first time such a lucrative prize has been offered in the sport, and all the pros who were Ranger qualified wanted to be the guy who earned it. Veteran David Walker was no exception, though he says perhaps fishing for money that big took more of a toll on him mentally than he realized – he was the lone pro yesterday to fail to weigh in a fish. He brought in two today to ultimately finish 79th out of 81 pros. “I’ve fished big-money tournaments before, and I didn’t really think it would get to me,” Walker said, noting that he competed in the very first Wal-Mart FLW Tour event back in 1996, where the winner – current top-10 pro Mike Surman – took home $18,500. “I’ve fished more and slept less (this week) than any event I’ve been to in my entire life.”

Back to form … Stacy King is a veteran pro angler who only very recently began strutting his stuff on FLW Outdoors tournament trails. Though he competed in the full slate of 2006 Wal-Mart FLW Series events, he earned his ticket into the Forrest Wood Cup via the Stren Series Midwest Division, where he ranked second last season. With his Cup berth secure, King had one less thing to worry about in 2007 – a good thing since the past year involved triple-bypass surgery. “I qualified through the Stren Series last year and then hit a bump in the road,” he said. “I had heart surgery and couldn’t fish the Tour or the Series.” Luckily for King, he didn’t need to in order to compete this week. He ultimately finished 42nd with a two-day catch of 12 pounds, 7 ounces. Looking fit and fresh on stage, King will no doubt be taking all three tours by storm next season.

5,000: Number of dollars Scott Martin was awarded today by Snickers for catching the heaviest bass of the season.

8-12: Weight, in pounds and ounces, of that Snickers Big Bass.

1,000: Number of dollars Thrift earned as the Gain Rookie of the Year.

4: Ounces separating No. 10 co-angler Ken Murphy from No. 11 Kenta Kimura.

57: Spots moved up the leaderboard by No. 5 co-angler Doug Caldwell, who ended day one in 62nd place.

26: Final position of Robert Dodson, the highest of the six “grass-roots” anglers competing on the pro side this week.

“I don’t want to think about that already; I’m ready for hunting season.” – Larry Nixon, after weighmaster Charlie Evans attempted to talk to him about the 2008 fishing season.

“I’m getting ready to go to a sushi bar and eat supper.” – Eventual finalist David Dudley, who weighed in within the first half hour today, when asked how he planned to spend the remaining weigh-in time, which would determine whether or not he’d be fishing for $1 million.

“He was throwing in other trees, and by the time I threw in there, their mouths were sore.” – Suggs, on taking a “whooping” from his day-two co-angler partner Caldwell.

“I get goose bumps thinking one of my friends is going to win this.” – Former champion George Cochran, himself a $500,000 winner, on his pals competing for $1 million.

“I’ve answered to a lot worse, that’s for sure.” – Pro Chad Morgenthaler, on his frequently mispronounced last name. For the record, it sounds like Morgan-Taylor … we think.

“I promise before I shake your hand I’ll wash the bass repellent off me.” – Pro Dion Hibdon, who finished a dismal 73rd, speaking to the kids fishing The Bass Federation’s National Guard Junior World Championship, which kicks off tomorrow on Lake Hamilton.

“I hope my wife coasts to a soft landing.” – Wade, after qualifying in the top 10 and earning the right to fish the next two days for $1 million.

“I’ll apologize to him later.” – Gagliardi, on booting local favorite Davis out of the top 10.