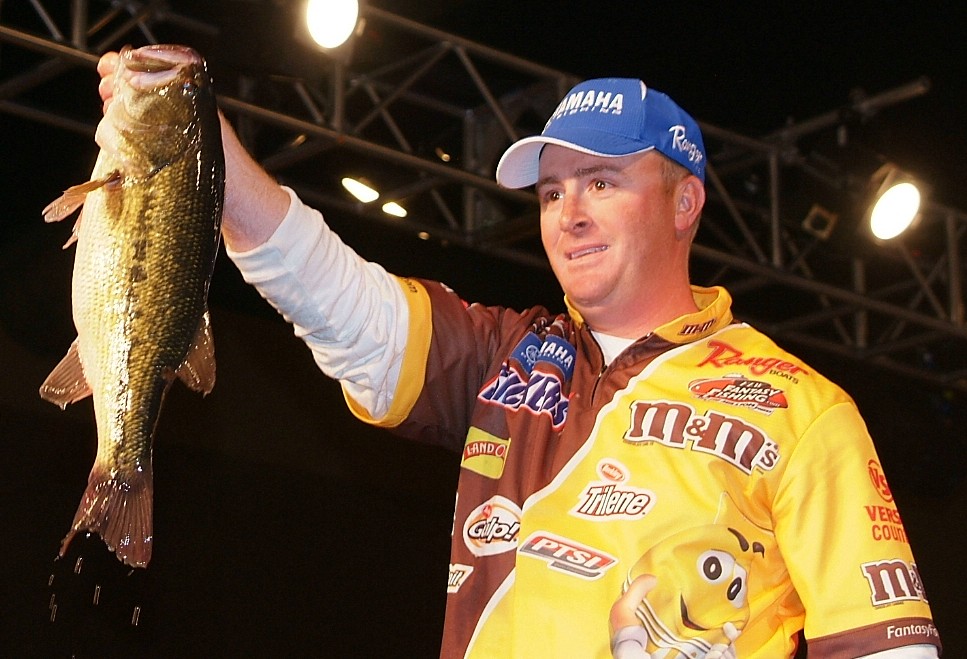 BRANSON, Mo. – Scott Canterbury of Springville, Ala., is proving that he means business in the world of professional bass fishing.

He won the 2008 FLW Tour Rookie of the Year with two second-place finishes in Tour competition last year. And this year he has already notched two top-10 finishes in the season opener at Guntersville and now at Table Rock.

With two second-place finishes last year and another near miss at Guntersville in February, Canterbury’s fans and supporters – and he has a lot of them – will be holding their collective breaths for eight hours tomorrow as he tries to reel in his first FLW Tour win.

Canterbury qualified in the 10th spot at Table Rock after day two, making the top 10 by just 4 ounces. Today, while his competitors piled up in the slow lane, Canterbury zipped around them with a 16-pound limit to take the overall lead by just 3 ounces.

While most of Canterbury’s competitors are running to the James River to catch their bass, Canterbury has something going in the White River arm. And best of all, he has it all to himself.

“In practice, I spent three days up the White River and one day up the James,” Canterbury said. “And I had a fantastic day up the James, but there were just too many boats up there, so I decided to take a gamble on the White, and so far it’s worked. The fishing has been a little harder up the White, but there are not near as many boats. In fact, today it pretty much cleared out up there, and I had it to myself.”

The only issue Canterbury is having up the White is running out of the right type of water. He is fishing Wiggle Warts and jigs on a particular kind of bank.

“It’s definitely a pattern,” Canterbury said. “I’m looking for a particular type of rock on a particular type of bank – and I have fished all of that type of water that is available up there. I branched out and fished new water today, but tomorrow I’m going to have to start revisiting my areas. That does not bother me as bad, knowing there are not as many boats up there.”

Now the big question: Can he close the deal tomorrow?

“I feel a little better about this one because I’m on a pattern that seems to be replenishing,” Canterbury said. “The fishing was actually pretty good for me today – I had eight keepers. At Guntersville I was in an area that went south on me, and here it’s all about a pattern. As for winning, when it’s your time, it’s your time. If I don’t win here, I’ll look forward to winning the first one somewhere else.”

2007 Forrest Wood Cup winner Scott Suggs of Bryant, Ark., might be on his way to pulling down 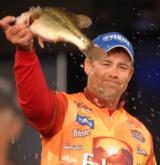 another Ozarks win this week with a well-planned strategy.

With a five-bass catch for 15 pounds, 13 ounces today, Suggs is ready to pounce with just a 3-ounce deficit off the lead.

One thing the Folgers pro has going solidly in his favor is a place where he can catch a limit of keepers first thing in the morning – and that is by design.

“When you go fishing up shallow on this lake with an empty livewell, you’re taking a real chance,” Suggs said. “These shallow fish will leave you high and dry in a heartbeat. So I spent some time in practice refining some deep places where keeper spotted bass are schooled up. I’m catching them on a little swimbait over 130 feet of water. They’re not big fish – just 15-inchers – but it only takes me an hour or so to get a limit. And if I can go to the bank with a limit already secured, mentally it makes things a lot easier.”

Once Suggs caps off his well with five 15-inchers, he goes to channel-swing banks with a ¾-ounce Divis Jig to upgrade his catch with bigger fish.

“Every day that shallow bite has gotten tougher and tougher,” Suggs said. “Today my shallow fish really pulled way off the bank and I only caught four on the jig, which is exactly why having a limit to start with is huge.”

Gagliardi is using some of his Clarks Hill and Lake Hartwell knowledge from back home to pinpoint suspended fish on a jerkbait.

“This is something I’ve just figured out over the last couple of days,” Gagliardi said. “The places where I’d been catching them shallow on a crankbait the first two days – well, now it’s like they have pulled out off the bank and suspended over 50 or 60 feet of water. I’m learning how they’re positioned off the bank a little more each day. Yesterday I caught some that way, and today I caught seven keepers.

“I’m pretty excited about what I have going,” he added. “I wish I had spent more time in practice finding more of these kinds of areas, but I’m putting it together and it’s fun.”

Dan Morehead of Paducah, Ky., is in the fourth-place position after day three with a five-bass limit

Morehead caught eight keepers on the day throwing a Wiggle Wart and a jerkbait.

But Morehead is around some quality fish. The Co-angler Division winner, Patrick Majors, who caught 14 pounds, 3 ounces today, came from Morehead’s boat.

“I think I probably forced that Wiggle Wart a little too much today,” Morehead said. “The rain and clouds were perfect, but there was very little wind, and I think that makes them suspend off the bank when it gets slick like that.”

“Things definitely changed for me today,” Walker said. “I went to my good water this morning, and it was dead – I mean nothing. Then I went to my absolute best places, and when I didn’t get any bites there, I knew it was over – I was fishing for ghosts – and I had to change. So I came down the lake and began fishing deeper than I have all week – about 20 feet of water with a jig – and I really managed to salvage the day with what I caught.”

Rounding out the top 10 pros in the FLW Tour event on Table Rock Lake after day three: