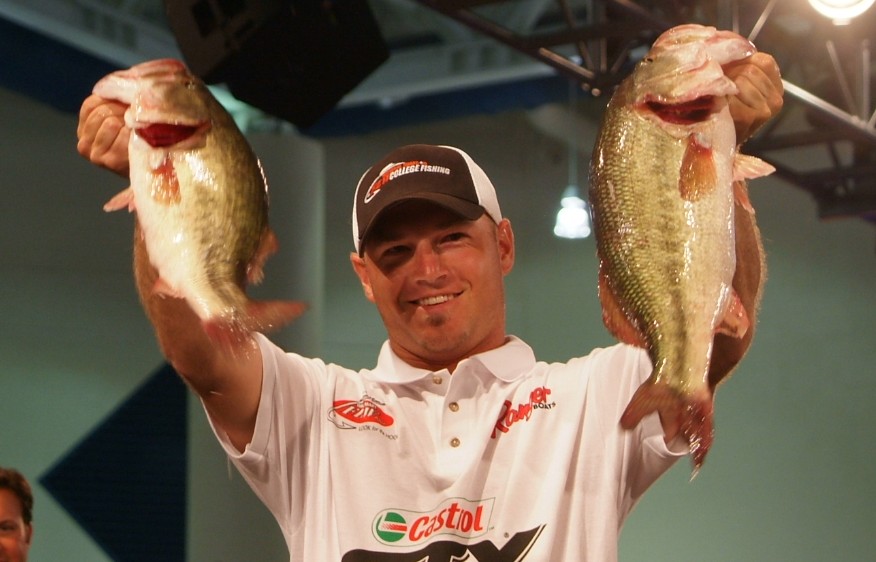 MURRAY, Ky. – As a resident of Benton, Ky., Brandon Hunter fishes Kentucky Lake just about every chance he gets. He also fishes the full Walmart FLW Tour schedule as a co-angler. But when the circuit stopped at his home lake for the fifth qualifying event of the season, he never dreamed he would walk away a champion.

The 25-year-old Hunter works at Fisherman’s Headquarters, a popular tackle store in Benton. That means if he’s not on the lake himself, he’s giving customers advice on how to catch more fish on their trips.

Hunter lives only two miles from the Kentucky Lake Dam Marina, but he fished water on day three that he’s never seen before in his life. That’s because his pro partner, Keith Williams, is running 75 miles south of the dam to the New Johnsonville, Tenn., area. 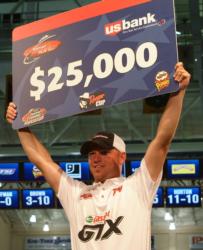 Once they reached their destination, Williams worked ledges with a jig. Hunter wanted to give the fish something different to look at, so he opted for a 10-inch Berkley Power Worm in plum color. He would Texas-rig the worm with a 5/16-ounce weight and tie it on 12-pound Berkley Trilene 100% Fluorocarbon line.

“I caught only six keepers total, but I got some quality bites, and that’s what it takes here on Kentucky Lake,” he said.

Hunter said he would subtly hop the worm up and down over a mixture of mussel beds and grass. The fish usually bit the worm on the fall. Williams positioned his boat in 26 feet of water, and Hunter would throw his bait up to approximately 12 feet.

“After I caught that big one (6 1/2-pounder), Keith told me that I had won. From then on I had a sick feeling in my stomach that I couldn’t shake for the rest of the day. I honestly never thought I would win on my home lake. As a co-angler, that’s so hard to do because you never know if you’ll get to fish the way you want to.”

For five Kentucky Lake bass weighing 19 pounds, 11 ounces, Hunter earned a check worth $25,000. While he weighed good limits each day, today’s 19-11 was his best of the tournament.

“Everybody talks about Guntersville, but if they let this grass grow, this lake will be just as good.” 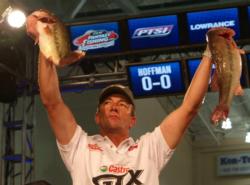 Divis barely squeaked into the final round of 10 boats with a two-day total of 28 pounds, 8 ounces. In fact, he tied National Guard co-angler Diane DeLaGarza for 10th place, but won the tiebreaker, which was heaviest single-day catch.

In the Pro Division, Mark Rose finished the opening round in 10th place, which meant the two would be paired together for day three. When Divis learned this, he knew he would have an excellent shot at victory. For those that are unaware, Rose is one of the best jig fishermen in the sport. Like Divis, he has a passion for slowly dragging jigs over off-shore structure.

As he always does, Divis caught his fish this week on a PJ’s 3/4-ounce football-head jig – the same bait that has earned him more than $200,000 in his career. In crossing the $200,000 mark, Divis became the second co-angler to do so. David Hudson was the first, and he achieved the milestone at the Walmart Open last month. Divis fished the jig with a Berkley Crazy Legs trailer on 15-pound Seguar fluorocarbon line.

“I used the Crazy Legs because I needed a beefy bait with a bigger profile. That was the key to catching the bigger fish for me.”

Divis said, if not for the generosity of his day-two pro partner Craig Powers, he would not have made the finals.

“He let me cast several times on his best spot. It was the most phenomenal act of kindness I’ve ever seen.” 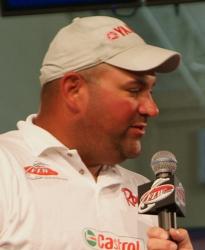 Dirk Davenport led his division after the conclusion of day two, but the weights are zeroed out for the final day of competition. On day three, the Delaware, Ohio, co-angler caught a limit from the back of Larry Nixon’s boat that weighed 12-12, but it was his smallest stringer of the tournament.

“I was using 6- and 7-inch Senkos in green-pumpkin color on a homemade 1/4-ounce football-head jig,” said Davenport. “I would screw the Senko up on the jig just like a shaky head.”

Davenport said he caught six keepers and that his day could have been better if Nixon had not caught his fish so early.

“Larry had his fish in the first 25 minutes, so he really didn’t want to cover a lot of water.”

This was Davenport’s second consecutive FLW Tour top 10 and fourth overall. He earned $7,500.

Gibson, Horton round out top five

Fourth place and $5,000 went to Scott Gibson of Wiggins, Miss., with five bass that weighed 12 pounds, 10 ounces. This was Gibson’s second top-10 finish of the season, the first coming at Lake Guntersville, where he took ninth. He dragged a big worm to catch his bass.

Mark Horton of Nicholasville, Ky., finished fifth with five bass weighing 11 pounds, 10 ounces. Horton had the pleasure of fishing with Kentucky Lake stalwart Terry Bolton on day two, and he made the most of it, catching 19 pounds, 6 ounces. He earned $4,000.

Rounding out the top 10 co-angler finishers at Kentucky and Barkley lakes: