Almost time to weigh ‘em up! 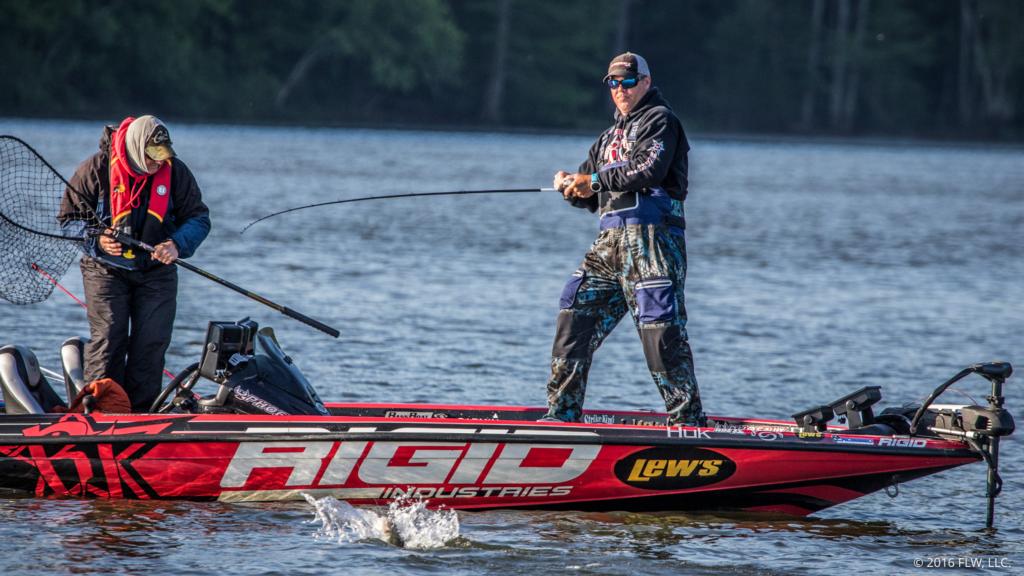 Places to fish on Pickwick and Wilson

With about a half hour until the first flight is due back, it’s time tog et ready for weigh-in. The lock from Wilson will open up at about 2:30, so that cadre of anglers will be headed back for a few minutes in Pickwick pretty quickly. From Pickwick, many pros have already been working their way back up river, but there’s still a long ways to go for plenty of them. We didn’t find everyone, but it’s almost for sure that more than Canterbury, Cotten and Neal have some hawgs. For that, be sure to tune in or come on down for weigh-in.

Watch the day-one weigh-in live at FLWFishing.com starting at 3 p.m. CT or come down and watch in-person at McFarland Park at 200 Jim Spain Drive, Florence, Ala., 35630.

A moment ago, we speculated that Rick Cotten would have filled his limit and be well over 20 pounds on the strength of his early giant. Turns out, that isn’t the case. Unfortunately, Cotten still only has three bass for about 18 pounds, has speared one wave and abandoned his offshore stuff. We know for a fact that Neal has his limit (for at least close to 20 pounds), so Cotten is going to need to figure something out fast if he wants a shot at the lead after day one.

Between Scott Canterbury, Michael Neal and Rick Cotten, it's plain how important a quick start to the day was. Now, you can add another quick starter to the mix: Scott Suggs, who has about 18 pounds and can’t fish any of his stuff due to wind now.

Around the field, a pair of northern boys are doing pretty well so far. Jeff “Gussy” Gustafson has about 14 pounds and Andy Young is in an interesting position with three that go about 10 pounds.

The wind is also a huge problem. It’s whipped the bottom part of the lake like crazy and almost everything offshore is wicked rough – so rough that most of the further out ledges are unfishable now. Our pros are the best in the world, but man, it’s going to be a long ride back to weigh-in and pros will need to be careful. With the wind blowing against the current (light as it is), Pickwick can get as rough as any lake in the country.

Per reports, Scott Canterbury had a pretty electric morning, catching over 20 pounds before about 8:30. He’s down on the ledges on Pickwick, and while it probably isn’t time to declare him the leader, he’s certainly gotten off to a good start. Since the morning dominance Cotten and Neal, we haven’t reestablished contact with them. It’s probably safe to say they have both filled limits out for more than 20 pounds, but it’s not for sure. Who knows, they might even be approaching 30 pounds with the right couple bites.

As the afternoon wears on, we’re still expecting to see some more action, even if the ledges are too rough to fish effectively. With plenty of bass still somewhat shallow on Pickwick, someone is going to find them and catch enough for a strong day one showing. Additionally, the guys (like Michael Wooley) who got off to good, but not amazing starts could make an upgrade or two. 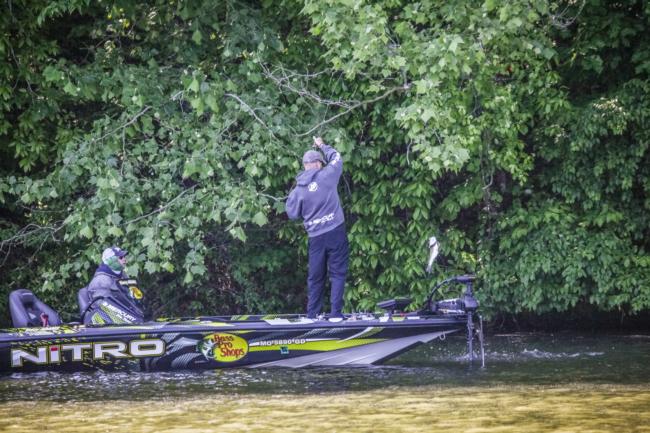 With the wind ravaging Pickwick and the crowds on the ledges starting to disperse a bit, the time has come to cast an eye to Wilson. Unfortunately, the pace up on Wilson seems to be a bit behind the ledges on Pickwick. Tracy Adams, Mark Daniels Jr., Scott Ashmore and Shawn Gordon all have fish from Wilson, but it is far from a whackfest. None of them have filled a limit yet or caught a signature kicker. Perhaps the bite will get better in the afternoon if the more protected coves of Wilson let pros get a little edge on the wind-beaten group down in Pickwick. 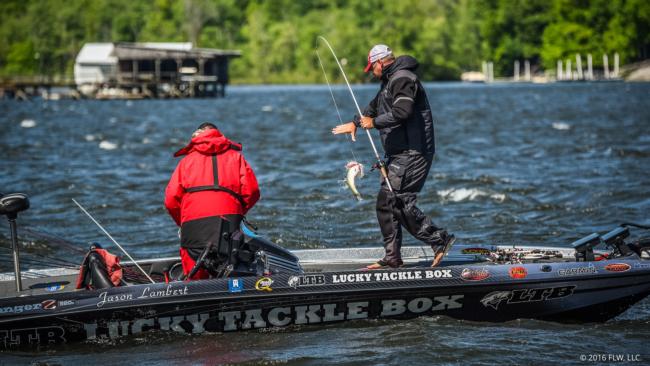 10:30 a.m.: Some more fish catches and another note on the conditions

The wind is pretty even across the lake, but the waves aren’t all uniform. Obviously, there are more protected portions, but the area around Natchez Trace is particularly bad. If the current does get up in the afternoon, things could get really rough. Per the TVA app, that isn’t supposed to happen, with low flows and light generation on tap for the afternoon.

Here are some updates on a few more anglers. Zack Birge has a 3-pounder. Troy Morrow has a limit for 12 pounds and is considering moving up into the river to chase smallmouths and escape the waves. Andrew Upshaw has two keepers. Tom Redington is still sitting on an empty ‘well. Finally, Jason Lambert has four that he says go for “no weight.” 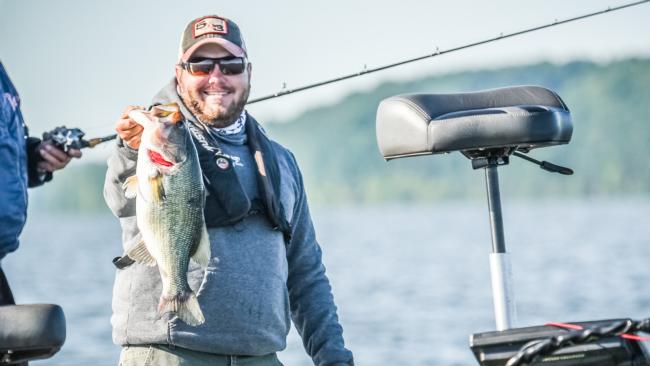 Since the last report, we haven’t found a whole lot of new action. Not that it isn’t happening, but some of the potential leaders like Randy Haynes, Jason Lambert and Stetson Blaylock simply haven’t been found. Around the field, Todd Hollowell has three small keepers. Fantasy Fishing darling Bryan Schmitt has two good ones and three small ones. Finally, Cody Meyer has gotten on the board with a keeper.

The fishing is Pickwick seems to be mostly a ledge deal, which isn’t a huge surprise. The wind is really becoming an issue now, blowing up against the current to make some pretty big rollers. It’s still possible to old, considering the current and the wind are working against each other, but it isn’t easy fishing by any means. More up the river on Pickwick (above Natchez Trace), plenty of pros are also working the shallower ledges that have grass flats and shell beds scattered over them.

Up on Wilson, very few pros ran to the Wheeler Dam and those who did have been pretty unsuccessful. Mostly, the pros are fishing around the banks or the backs of creeks there. So far, the only ones on the board that we know of are Mark Daniels Jr.  with one keeper and Tracy Adams with three for about 7 pounds.

The wind is forecast to blow pretty good today. Things started out pretty calm, but there are whitecaps pushing against the current at takeoff and Pickwick is a big lake. In a few more hours, the ledges might get really bad. The pros like Neal, Wooley and Cotton who are striking quickly out deep might really be in good shape if the offshore stuff becomes close to unfishable in the afternoon. 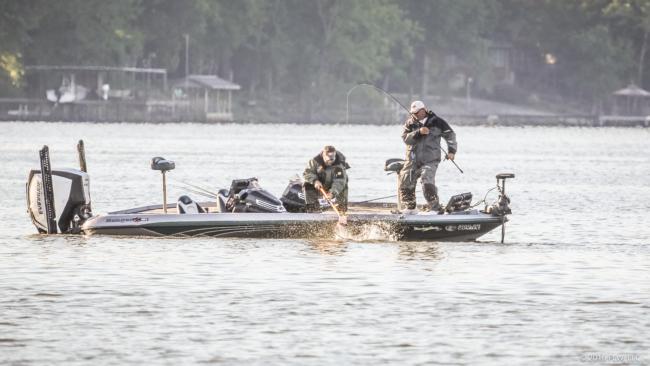 It seems like the offshore bite has heated up on Pickwick despite the cool morning. Michael Neal just pulled up on a spot and caught a 4-pounder, a 5-pounder and a 7-pounder on consecutive casts. In total, he has four for about 17 pounds. We’ve finally got an accurate picture of Rick Cotten’s start, and it turns out that he has a 10-pounder, a 5-pounder and a 3-pounder. That puts him easily into the mid or high teens with just three bass.

Down the lake, near the dam, Michael Wooley is already culling, but he doesn’t have a limit of giants. At the moment, he’s sitting around 13 pounds. Elsewhere, Luke Dunkin is on the board with a solid 2+, Jeff Sprague has three small ones and David Dudley has one in the box.

Pickwick was the destination for the majority of the tournament favorites and ledge hammers and there are some decent fish being caught now. Rick Cotten is rolling with three for about 11 pounds. Randy Haynes started in Pickwick and is moving and grooving like usual, but without any results early. Brad Knight and Michael Neal each have a 3-pounder in the boat. Finally, Larry Nixon and Alex Davis each have one keeper, Davis’s being a 2-pound smallie. 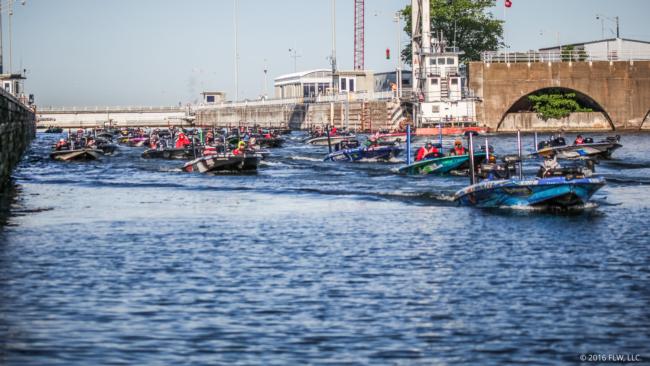 In total, about 50 pros elected to lock through to Wilson, a number that the Pickwick hammers would undoubtedly be pleased with. Just moments ago, the lock opened up and the pros streamed off, some toward the Wheeler Dam to fish the tailrace and others toward the plentiful shallow cover in Wilson.

Down on Pickwick, there is plenty going on, but it’s turning into a bit of a ledge derby already. The first stop was the same for Chris Johnston, Cody  Meyer and Alex Davis. Reportedly, Andrew Upshaw and Jacob Wheeler were also headed to about the same area. With not a ton of fish out deep yet, it might be a little tough on pros if they’ve only found fish on the more obvious spots. 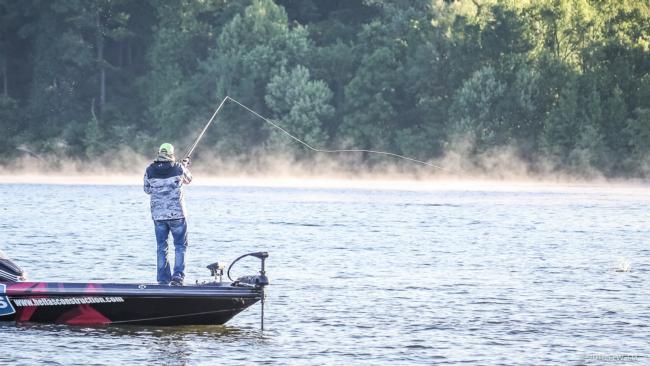 Though a lot of anglers started the day with a long run toward Tennessee, plenty started close to Florence and about 50 turned up and headed toward the lock and Wilson.

In Pickwick, so far we’ve tracked down two pros with fish. Wesley Strader has a 2-pounder to start things off and Barry Wilson busted a 4-pound smallmouth fishing just above takeoff that he says "just about gave me a heart attack." 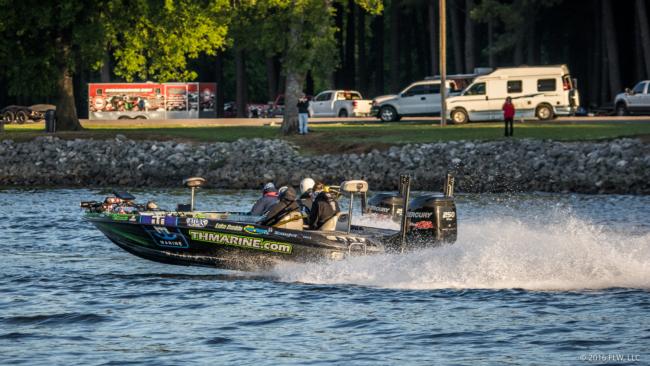 6:30 a.m.: Wind and cool down might challenge anglers on day one

Day one of the Walmart FLW Tour presented by Quaker State and hosted by Florence/Lauderdale Tourism on Pickwick Lake took off under conditions that aren’t really typical of Alabama in the spring. With a chill in the air and high winds in the forecast, today seems more like April than May. Nonetheless, the Tennessee River has some of the best bass lakes in the country strung along it, and the anglers spreading out into Pickwick and Wilson will surely find some big bass regardless.

Reports from practice have been pretty mixed, though plenty of anglers have caught a handful of true giants, the numbers haven’t really matched up with expectations. Most pros think the bass are pretty spread out, with some still up shallow recuperating from the spawn and guarding fry, others on the ledges and the majority somewhere in between.  The in-between section holds a lot of potential this week – Pickwick has a lot more hydrilla in it than usual and the shad spawn is in full swing. That combo could result in a lot of weight, either from someone keying specifically on spawning shad or a pro just working the grass or some subtlety in it.

A few weeks from now, everyone would be talking about the ledges. Right now, the bass aren’t on the edges in full force, but that doesn’t mean there isn’t quality to be had out deep. The problem is the number and the size of the schools. Per reports, there aren’t many (or perhaps any) large schools that could sustain even two anglers for multiple days and the number of smaller schools is still pretty low. Of course, the FLW Tour is unquestionably home to the best ledge fishermen in the world – someone will find them.

So get ready, the conditions might be contrary, but someone is going to catch them big and it could happen from the bank to the river channel.

Watch the day-one weigh-in live at FLWFishing.com starting at 3 p.m. CT or come down and watch in-person at McFarland Park at 200 Jim Spain Drive, Florence, Ala., 35630.