Lots of 20+ bags have it tight at the top (updated) 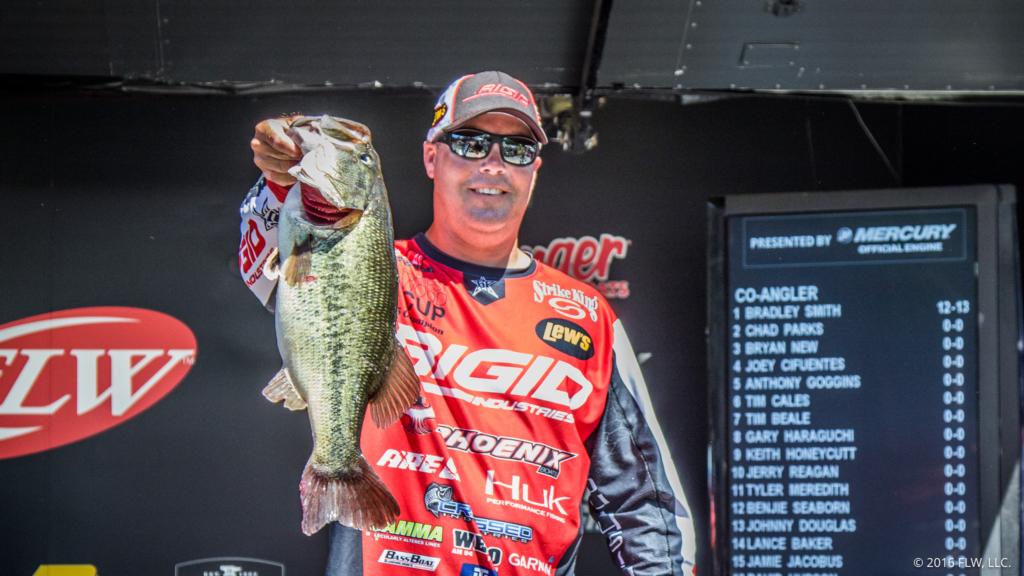 Since winning the Forrest Wood Cup in August of 2015, Brad Knight’s 2016 follow-up Walmart FLW Tour season has not been what he had hoped, collecting just one check in the first four events. Today the Lancing, Tenn., resident took the first step in righting the ship with a five-bass limit weighing 23 pounds, 6 ounces for the day-one lead at the FLW Tour on Kentucky Lake presented by Mercury and hosted by the Kentucky Lake Convention and Visitors Bureau.

“Man, I’ve had enough of the bad this year,” Knight says. “It’s time to get this thing turned around and what better place to do it than on the Tennessee River.”

Knight’s limit was anchored by the day-one big bass, weighing in at 8 pounds, 9 ounces.

“She bit in the last two hours of the fishing day,” Knight says. “A fish like that goes a long way – it was some good fortune for working hard. I kept a Strike King plug in my hand, covering water all day. I probably made 20 stops and went through 25 or 30 keepers.” 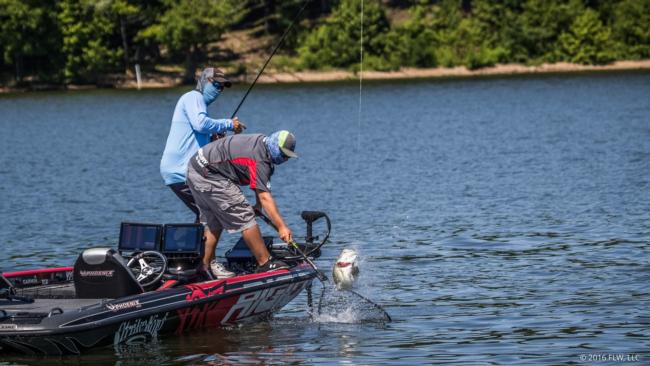 While many of those just behind Knight on the leaderboard are playing the idle-over-the-schools game, he noted that he is fishing a bit shallower.

“I’m not really fishing those big schools,” Knight says. “I’m trying to stay away from the obvious main river school areas. Instead, I’m fishing up a little shallower for fish that I don’t think you could see on the graph because they’re a bit too shallow for that. By the time I idled over them, they’d probably spook. I’m having to fish my way into little pods of fish with a plug.”

There has been much discussion this week on exactly where Kentucky Lake fish are in their yearly migration to the ledges – or lack thereof. Knight believes that has been due to lack of current in the system, which has not pulled the whole food chain out to the river ledges.

With forecasts calling for near 100 degrees temps starting tomorrow, Knight says bring it on.

“The hotter the better,” he remarks. “I want sweat running down my back and my arms burning from cranking that plug – that’s when I’m most comfortable on the Tennessee River.”

The top three review the day 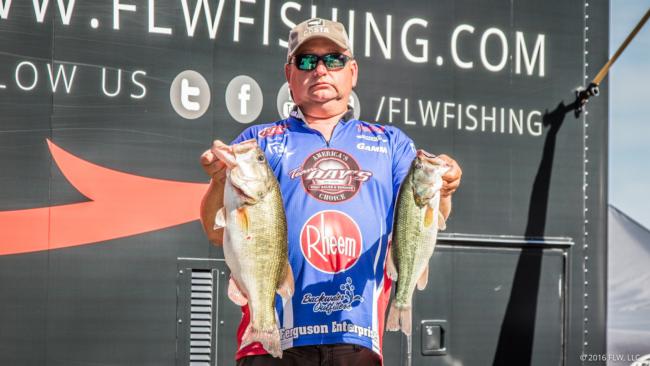 Up until 2 p.m., Mark Horton’s Day 1 was solid but uneventful. A kicker weighing 7-10 sure changed that.

The co-angler from Nicholasville, Kentucky, took a 4-ounce lead over Joe McClary of Kirkwood, Missouri, on day one with the help of the big bass for the co-angler side. His total weight was 21 pounds, 5 ounces. The giant fish came on a jig as he and pro Jacob Wheeler made their way back to weigh-in.