Martin Makes it Three at Champlain 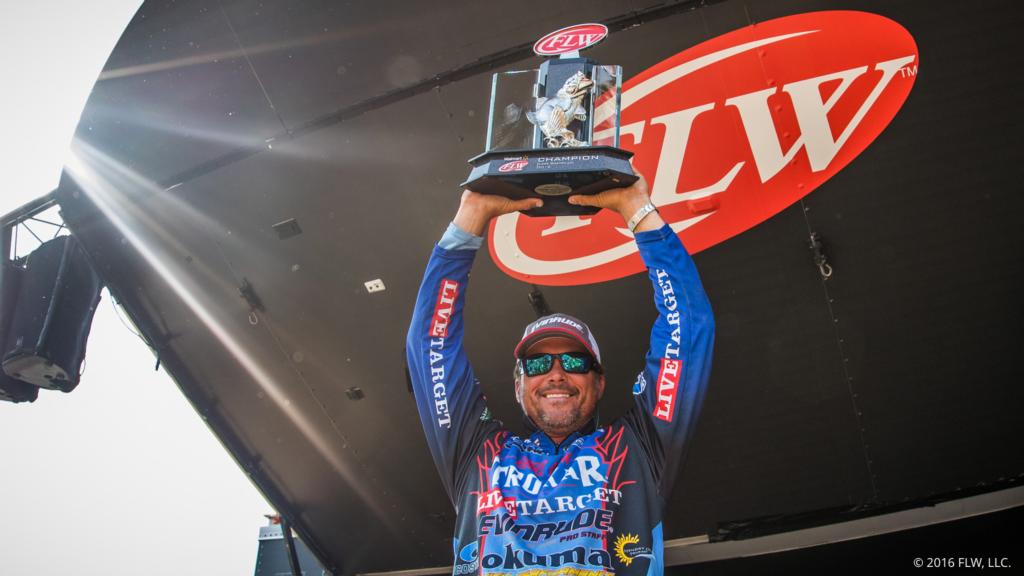 In 2004, Scott Martin won a Walmart FLW Tour event on Lake Champlain by catching smallmouths off beds in practice, weighing them, letting them go and then returning during the tournament to catch the ones that weighed just a little bit more than their neighbors.

In 2009, Martin returned to Champlain and scored another Tour victory by catching largemouths from offshore rock reefs in Missisquoi Bay.

With this win, Martin becomes a six-time FLW Tour winner – the most in FLW Tour history – and backs up his reputation as a closer in Tour events. He rarely gives up a lead once he claims it.

From the minute he took the lead on day one with 22 pounds, 5 ounces, Martin maintained an air of cool, collected confidence that kept his pursuers at arm’s length. In the end, he managed to stave off a hard charge from runner-up Jason Meninger with a final-day catch of 16 pounds that gave him a 1-pound margin of victory with a total of 74 pounds, 10 ounces.

“This place is very special to me,” Martin says of Champlain. “I just love this part of the country in the summer. It’s like a northern Okeechobee with smallmouths, and I just feel comfortable when I fish here. In June, it combines two of my favorite types of fishing: sight-fishing and fishing shallow, natural cover for largemouths.”

Martin’s one-two punch at Champlain started on day one with a big catch of largemouths from the offshore reefs, rocks, laydowns and inflows in the Missisquoi area. It was during this time that Martin discovered the key to the largemouth bite in Missisquoi.

“When I won here in 2009, I was cranking those rocks and milfoil in Missisquoi,” he says. “This time I caught a few on a crankbait, too, but what really caught the better quality largemouths was dragging a compact jig in those same areas. I was using a 1/2-ounce M-Pack jig that I trimmed down and put a small trailer on. I think that smaller profile was important. Several times I fished the rocks with several other baits without a bite. And then I’d catch a good one on the first cast with the M-Pack jig.”

Martin fished the jig on 17-pound-test P-Line fluorocarbon, targeting rocks in the 3- to 6-foot range. He relied on the reefs the first two days to build a 3-pound, 9-ounce lead.

On day three, Martin was sidelined with mechanical difficulties in the morning that cost him nearly two hours of fishing time. Yet he never missed a beat from the complications. Instead of forcing the issue with the largemouths on the reefs in Missisquoi, he went to his back-up smallmouths on beds near Plattsburgh and caught 16 pounds, 5 ounces to salvage his day. Martin used a variety of lures to catch the bedding smallies, including a white Tightlines UV craw and a white tube.

On the final day, Martin started on his smallmouths to get one or two in the livewell before heading to Missisquoi to make his rounds on reefs, rocks and laydowns.

“The reefs were a key part of my largemouth program,” Martins says, “but I also had some other stuff tucked away in Missisquoi that produced some decent fish. I had a couple of big rocks, some laydowns on the banks, and I found one submerged laydown in one of the rivers that was critical. I caught a 3 1/2-pounder off it today that really helped.

“One thing I’ve learned in tournament fishing over the years is that you can’t get rattled,” he adds. “Things are going to happen, good and bad. You have to stay focused on making the best of what you have, and this week was a testament to that. I didn’t get upset or spun out. I just kept working with what the lake would give me and didn’t try to force things that weren’t going to work. Using the bigger largemouths to get a lead and then falling back on those smallmouths when I needed them turned out to be the winning ticket.”