Why Up a Creek?

Where and why the top competitors plied creeks at the Cup 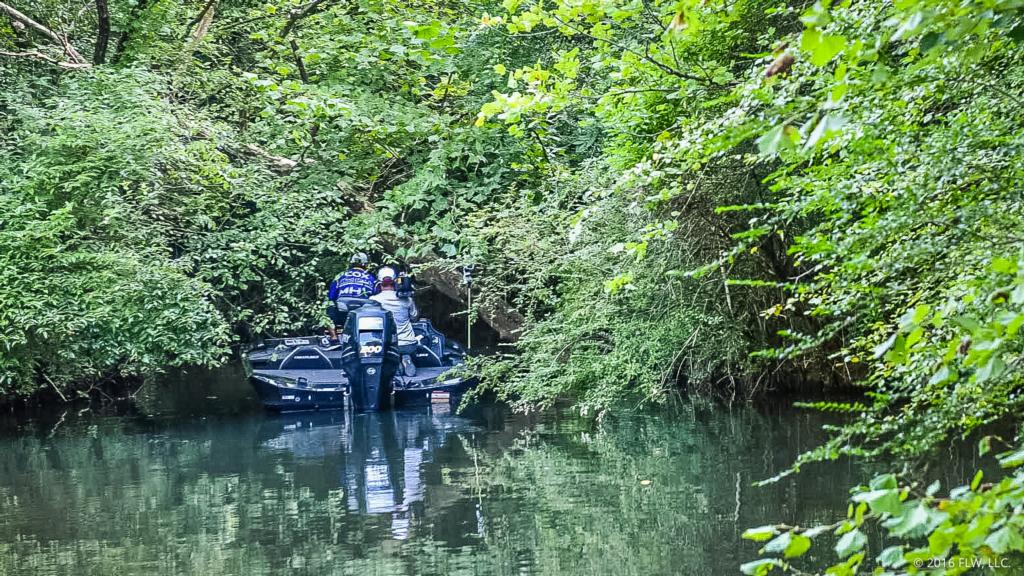 Heading into the Forrest Wood Cup on Wheeler Lake, every pundit in the game was on the lookout for the shallow bite, and there wasn’t a pro around who didn’t have it on the radar. When the dust settled, the shallows did indeed reign, but it was the creeks that really shone. Of the pros who made the top 20, a strong contingent spent large parts of the tournament bumping around logs and sandbars in places that were miles from the main river and often just wide enough to squeeze into with a boat.

Heading way up the river in August has turned into a Forrest Wood Cup tradition. When Jacob Wheeler won in 2012, he did it largely in the Chattahoochee River, far from takeoff and the clear waters of Lake Lanier. In 2015, tons of weight came from far up the creeks and rivers of Lake Ouachita. Brad Knight won there, and Zack Birge (eighth) and Mark Daniels Jr. (ninth) both caught nearly all their fish at the extremes.

Ask most any pro and he’ll tell you that the creeks get good in the late summer for a few reasons. One of the biggest is that the fishing in the main lake is usually bad then, so decent fishing looks better by comparison. The other is that the slightly cooler, more oxygenated water flowing in is simply more attractive to bass and bait.

“There are definitely resident fish that live shallow or live in those creeks all the time,” says Braxton Setzer, who studied fisheries and allied aquacultures at Auburn before debuting on the Walmart FLW Tour in 2016. “But, with some kind of water temperature difference, I wouldn’t say it’d be far-fetched for fish to swim in there and get off that main river to the cooler water. In the fall, they start moving back shallow to feed even before the temperature drops, so they don’t have to be out deep.”

The phenomenon of bass moving away from offshore structure as the summer wears on is well known. Even on Kentucky Lake, the mecca of all ledge lakes, the offshore fishing peaks in May or June and then tapers off as bass gradually move shallower and off the main channel.

In John Cox’s estimation, some of the bass he was catching miles up Cotaco Creek spend at least a little of their lives in Wheeler Lake proper. Dustin Smith, who fished Cotaco for a top 10 in the Costa FLW Series on Wheeler in the spring, has a similar take.

“I think it was a mixture of resident fish and ones from the lake in the spring,” says Smith. “I fished there once before for an ABA championship in November and there were fish in there then. So spring, summer and fall have all been good.”

Of course, the fact that there are quality fish in Cotaco Creek seemingly all year might point toward it being an exception rather than the rule.

While John Cox’s pattern and location have been covered about as extensively as possible, one pattern isn’t the whole story. Here’s a look at some of the other creeks that competitors went up during the Cup. 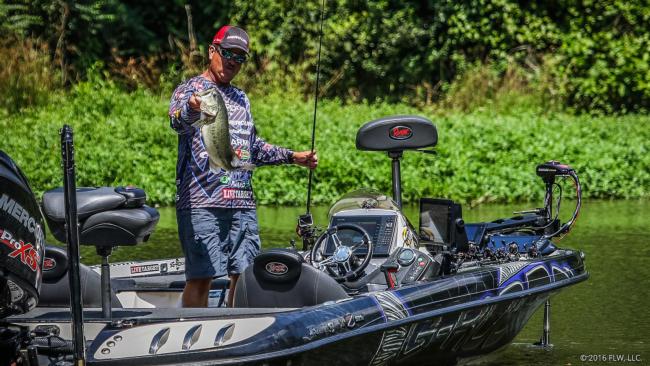 Todd Auten ended up running about as far as possible from takeoff, starting his final two days far in the back of Second Creek and then transitioning to the extreme end of Anderson Creek, which was where he caught the 6-pounder that keyed his charge. Both creeks had defined channels, a fair amount of wood cover and a little flow. Auten noticed that a good number of his bites came off the bank, not noticeably related to a piece of cover. He theorized that when the bass weren’t super active, or when they were pressured by a day of fishing, they’d slide off the banks into the channel and await a meal.

Auten is as respected as it gets when shallow water comes into play, and he always looks at creeks come August and September in the South.

“I look for cooler water and moving water a lot of times, and the back of the creeks are where you’re going to find both,” says Auten. “You need a lake that is a little more ‘mountainy.’ In some of the flatter lakes, the creeks silt over, and you can’t get in them. On Lake Wylie, you can’t get back far enough in them for them to be any good. All those creeks at Wheeler you could get in, and they go back a long way. That’s what you’ve got to look at if you’re looking to do the creek deal. You need those longer creeks with lots of shade and cover.

“Personally, I think a lot of the fish in there are resident fish. If there’s bait in there, there will be some fish in there. Especially on Wheeler, you’d see bait everywhere. If the bait is coming in there, even if it’s just 2 or 3 degrees cooler, that’s enough to hold bass in there.” 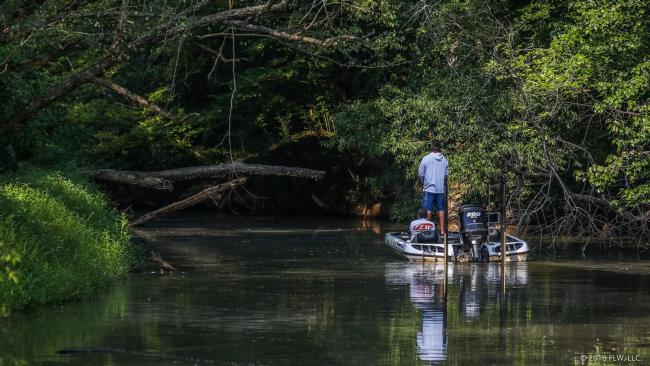 JT Kenney shocked everyone on day two at the Cup by bringing in a massive 19-2 bag to move from 48th into the top-20 cut. He did it by ditching the offshore bite and squeezing his boat as far as he could up Shoal Creek. In the creek, the layout wasn’t that different from Cotaco, but Kenney wasn’t able to go as far as Cox was in Cotaco. He was restricted by a sharp turn, some big laydowns and gravel bars. In the creek, Kenney tossed a spinnerbait and flipped. Coincidentally, that was Cox’s original plan before the duckweed drifted down into his area before day one, prompting him to pick up a frog.

One notable difference between Kenney’s creek and some of the others was that Shoal Creek is located much farther up Wheeler Lake and is really an offshoot of the Tennessee River more than anything. Because of that, Kenney was actually fishing closer to the main channel than almost any of the other creek dwellers, even though his creek was just as “creeky” as anyone else’s. Perhaps due to the shortness of the Creek, or maybe because the water level rose a fair amount on the third day, Kenney’s fish seemed to run out faster than elsewhere, and he was unable to follow up his day two success in the subsequent round. 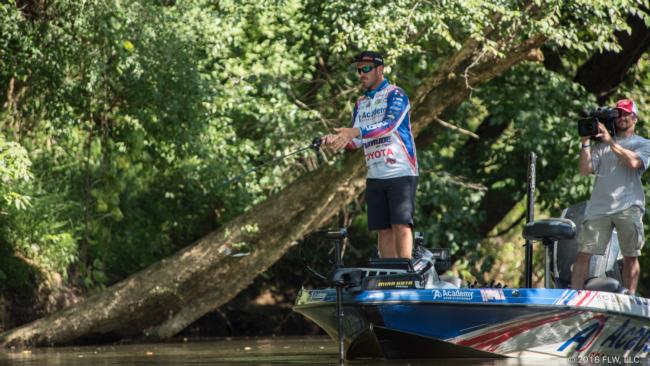 It was no surprise that Jacob Wheeler relied on creeks to earn another top 10 in the Cup, but he took a different approach than some of the others and different from his own at Lanier. Instead of milking one creek the whole time, the young pro made a point of running fresh water each day.

His decision not to bank on one creek makes sense considering his choice of water. While he still spent most of his time fishing in the more channelized portions of creeks, he stayed away from some of the longer creeks and instead opted for shorter ones that drained into secondary backwaters, particularly around the back of Piney Creek. In the smaller creeks, he threw the same basic baits as the rest of the creek crew did, mostly relying on a jig and a buzzbait. 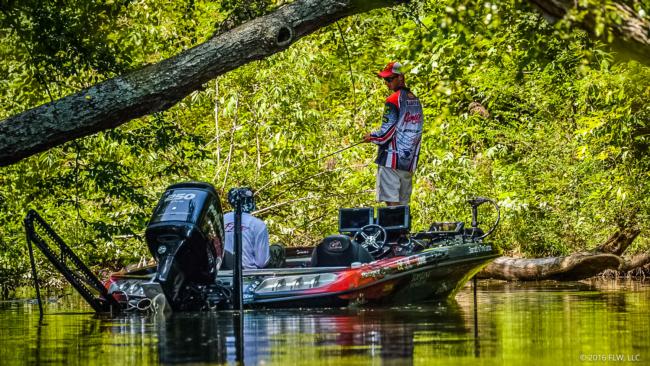 Earning a top 10 in the Cup for the second year in a row, Brandon Cobb limited each of the first two days in a small pocket off the main lake, but also did a lot of his damage a ways up Elk River, mostly on the flats where Sugar Creek cuts off from the Elk River and far back in the side creek just before the second bridge.

Per Cobb, the little pocket was really the juice, and he leaned on it hard for decent limits to make the third day.

“That spot was really weird,” says Cobb. “It was a pocket on the main lake. I wouldn’t call it a creek. And there was a little ditch in the back of it. If you looked at the map you wouldn’t call it a big creek. There was just a pocket with a spring or something running in at the back and some cooler water. In three days, I think I caught 20 fish out of a hundred-yard-long creek.”

Cobb says the water in his pocket was about 4 degrees cooler than the main lake, but even that wasn’t as cool as the side creek in the Elk.

“That [the main-lake pocket] is where I caught the bigger bag I had on day three. I really thought it had 18-pound potential, but on the second day and the final day a lot of them were schooling on the pods of bait around the flat and I couldn’t catch them,” he recalls. “The third day they weren’t schooling at all, and that’s when I caught them flipping.

“In the one up the Elk, it would get to be 10 degrees cooler or more, and most of the fish were where it changed and mixed,” says Cobb. “I’ve noticed that in creeks a lot – the biggest population is usually where the water is mixing and everything.”

In his pocket, Cobb started fishing quickly with a Zoom Brush Hog, then fished slowly with a jig on the second day and had to go to a drop-shot on the third. Up in the Elk, he mostly stuck with a jig.