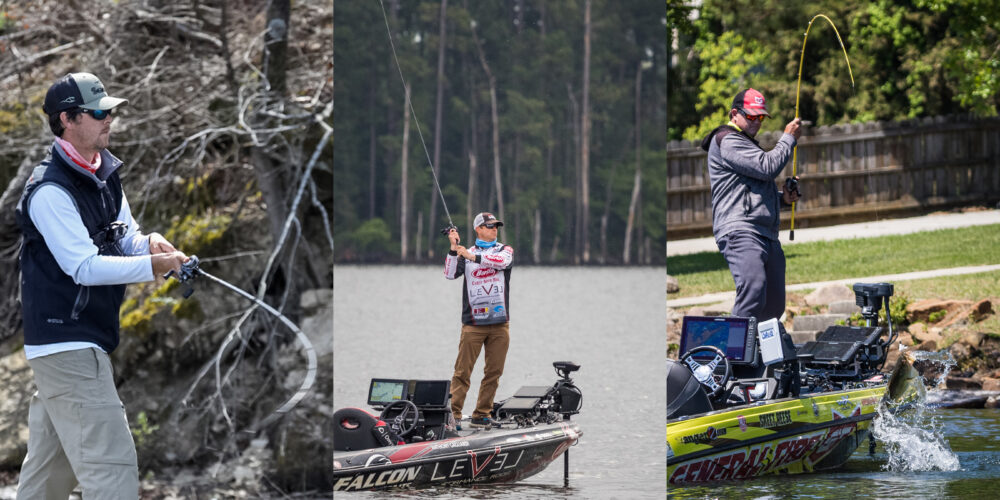 At the midway point of the Tackle Warehouse Pro Circuit Presented by Bad Boy Mowers season, the Angler of the Year race is already looking like a banger. With long-established veterans and some new blood in the hunt, the final three events at Lake Eufaula, the Potomac River and St. Lawrence River will all be key to the standings.

With deeper dives into each angler, it will become apparent that the leaders are setting a heck of a pace this year. Last year’s AOY champ Ron Nelson ripped off a pair of Top 10 finishes and an 11th to start the season in 2020. This year, the leaders aren’t on quite the same pace, but they’re doing much better than eventual second-place finisher Spencer Shuffield did last year – then, Shuff finished 28th, 56th and third in the first three events. Last year, Matt Becker was in second place after the first three events with one Top 10 and two finishes in the 20s for an average finish of 15.6. This year, third place Skeet Reese is running an average finish of 14.3 through the first stretch of the season.

The next big thing for quite a while now, it’s no big surprise to see Cole Floyd in the hunt for AOY. Lowkey and a killer on the water, Floyd is very good at nearly everything and terrifyingly young.

So far, the sophomore pro has knocked down two ninth-place showings in the first two events and an 18th at Murray. If the race really goes down to the wire, he might be haunted by the final days at Okeechobee and Smith – Floyd caught less than 14 pounds both times.

Looking ahead, the Ohio pro is in prime position for Eufaula and the Potomac, but the finale at the St. Lawrence River might pose some problems. One of the best offshore anglers in the game, it takes some real mental gymnastics to imagine Floyd doing poorly at Eufaula. The Potomac is perhaps a little iffier – Floyd is great shallow and great in grass, but rivers that aren’t the Tennessee have stymied him to a degree. Still, he’s a better angler now than he was when he finished 59th in the College Fishing National Championship on the Potomac in 2019, and he won’t be going in blind this time.

If Floyd makes it past the Potomac well, the St. Lawrence could pose some more problems. Despite an address north of the Mason-Dixon, smallmouths are definitively Floyd’s weakness. In 2020, Floyd finished 20th on Lake Erie, but he did it by running to the Detroit River and flipping for largemouths. If Floyd is weighing largemouths at St. Lawrence, he could be in some real trouble.

A former FLW Tour Angler of the Year, Anthony Gagliardi is no stranger to the top of the standings. Back in five-bass competition on a consistent basis, the South Carolina pro is thriving, with a 10th-place showing to start the season at Okeechobee, a 29th at Smith and a runner-up finish on the home pond at Murray.

Gagliardi has finished in the top five in the FLW Tour standings three times before, and he nearly always qualified for the FLW Cup, so the idea that he’d win another AOY isn’t wild, especially given a little home cooking.

Obviously a great bet in the Carolinas and on clear, southern fisheries, Gagliardi has had a long enough career that you can find a bad event or a good event for about any situation you want. Of course, that’s not a knock – even Bryan Thrift doesn’t catch them literally every time. If forced to pick a stumbling block going forward, it might be the St. Lawrence. Though you’d think he’d be great when it comes to smallies, Gagliardi didn’t make the Knockout Round in the Bass Pro Tour event on Sturgeon Bay in 2020 and he’s got a bit of a checkered past up north. Still, he’s wildly good and likely won’t be the only pro slightly on their heels when smallmouth season fully engages.

Folks, Skeet Reese is back. Since moving to the Bass Pro Tour from the Elite Series for the 2019 season, Reese has fished well below his usual standard, putting up a 43rd place showing and a 62nd place showing in two years, which isn’t too big of a worry in a field of 150 or so, but not what you want when there are only 80 anglers. Now, he’s popped a win, a Top 10 and a 32nd place finish to start the season on the Pro Circuit and he might be the AOY favorite.

With a long history of success and an Elite Series AOY title in 2007, Reese hasn’t really got a weakness you can point to, especially considering the next few stops. Depending on how the rest of the season goes, the rejuvenated Reese might join Kevin VanDam, Denny Brauer, Clark Wendlandt and Jay Yelas as just the fifth person to win both an Elite Series and FLW Tour/Pro Circuit AOY.

Behind the top three, the standings are noticeably murkier. Michael Neal is due for an AOY title and in fourth with 545 points. Bobby Lane has 537 points for fifth. Tied for sixth, Jeremy Lawyer and Kurt Mitchell both have 516 points, and Justin Lucas has 512 points for eighth.

Of the pros currently in the hunt, Mitchell and Lucas might be the most dangerous in the second half of the season. While Mitchell isn’t a lock on Eufaula, both pros have a lot of Potomac success (Lucas has won an Elite Series event there) and the two are absolutely smallmouth superstars capable of putting on a show this summer at the St. Lawrence. Depending on how things shake out, they could both be in the hunt come the season finale. Notably, Lucas is also one of the contenders with a B.A.S.S. AOY title, so he could have some history on the line as well.

With plenty of time left in the season for comebacks and disappointments, it’s worth looking a little deeper in the standings as well. If you’re going to do that, you’ve got to think about Adrian Avena, who’s steady as a rock on tidal water and has plenty of northern smallie chops. You also might think about Matt Becker – hot off a win, he won Rookie of the Year by showing out with smallmouths, and he’d probably like to do the same for an even bigger title.