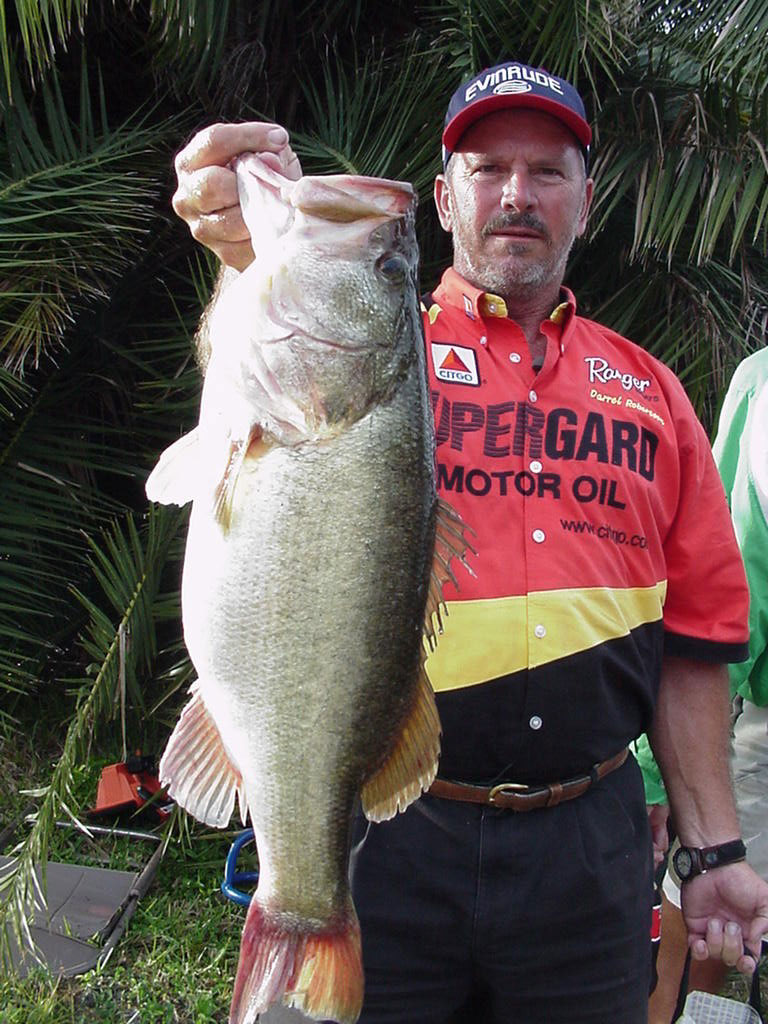 Darrel Robertson of Jay, Okla., shows off a gigantic 8-pound, 7-ounce bass which helped propel him into the lead after the second day of the $300,000 EverStart Challenge in Cypress Gardens. Photo by Gary Mortenson. Angler: Darrel Robertson.
November 9, 2000 • Gary Mortenson • Toyota Series

CYPRESS GARDENS, Fla. – On a day where humungous bass were the rule and not the exception, pro Darrel Robertson of Jay, Okla., hauled in a whopping 8-pound, 7-pounce fish to vault into the overall lead in the $300,000 EverStart Series Invitational Challenge. Robertson, who won a first-prize check of $600,000 during the Ranger M1 Millennium Tournament at Cypress Gardens in 1999, found similar success today fishing in almost exactly the same spot as he did one year earlier.

With a total catch of 15 pounds, 5 ounces, Robertson brought his two-day total to 27 pounds, 15 ounces.

And to hear him tell it, he could have caught more.

Robertson, who also placed fifth at this year’s Wal-Mart FLW Tour Championship at Shreveport, La., said that he hoped his string of strong fishing performances in the fall would continue this week.

“I think I understand the fish a little bit better this time of year,” said Robertson of his comfort level with the fall-fishing patterns. “I’m excited to make the cut, but there are a lot of good fishermen out here. And to tell you the truth, I wish I could have saved that big fish for (the final round on) Saturday.”

Taylor Hutchings of Phoenix, Ariz., was in second place heading into Friday’s competition with a two-day catch of 26 pounds, 2 ounces.

Chip Harrison of Bremen, Ind., said he was pleased with his performance after recording a third-place finish with a two-day catch of 25 pounds, 15 ounces.

“I’m kind of excited,” said Harrison, who won the inaugural EverStart tournament on Lake Okeechobee, Fla., in 1998. “I didn’t have a good day yesterday and I really needed to stay focused. My goal was to make the top 10 and I accomplished that. So it feels good.”

Harrison said that fishing in Indiana for many years has given him a slight advantage over the field.

“I grew up in northern Indiana and these are the type of lakes I’m used to,” he said. “These lakes here are not very big and there are a lot of people fishing in a relatively small area. I think the congestion on the lakes here bothers some people, but like I said, I’m used to it.”

“I’m happy to be fishing tomorrow,” Hackney said. “I had a good day yesterday and I knew what I needed to do today. I caught three fish pretty quickly and then I kind of backed off a little bit. I really wanted to save some fish for later in the tournament.”

The big fish kept on coming

While Robertson’s red-hot performance was the hot topic of conversation, the real story of the day appeared to be the reemergence of gargantuan bass. Despite a host of relatively small stringers on day one, Thursday’s action produced at least 6 bass weighing in over 7 pounds. But it didn’t end there. In addition to Robertson’s huge 8 pound, 7 ounce bass, Hall, who finished in seventh place in the Pro Division, hauled in a 9-pound, 12-ounce behemoth to capture a $750 prize for big bass of the day.

Harrison, who caught a 7-pound, 13-ounce bass today as well as another weighing 7 pounds, 12 ounces, believes that there are a lot more trophy bass to be had in the next two days given the right conditions.

“For some reason, there are some monster fish in here,” said Harrison, in what was probably the understatement of the day. “I think tomorrow, someone is going to catch a load of fish. I just hope it’s me.”

The Co-Angler Division leader board was still close after day two, with less than three pounds separating all 10 anglers. However, the faces of those leaders changed fairly dramatically. In fact, six of the top-10 co-anglers after day one did not make the final cut after the conclusion of Thursday’s competition.

Fortunately for George Anders, he was not one of them. Anders, a native of Pineville, La., took the overall lead with a two-day catch of 13 pounds, 14 ounces – catching exactly 6 pounds, 15 ounces on both days.

“I’ve been pretty consistent so far,” said Anders. “And obviously that has helped.”

Although he was happy to make the top 10, Anders appeared to be having as much fun as anyone in the entire tournament.

“This has just been a great experience,” he said. “The pros have been really nice and they’ve helped me a lot. It was really exciting watching everyone catch those fish today. It seemed like every time I turned around in my boat, someone was catching a huge fish. So far, it’s been a pretty neat deal.”

The top 10 co-anglers will compete for a $10,000 first-place check and a new Ranger boat on Friday.

Friday morning takeoff for both pros and co-anglers will take place at 8 a.m. at the Cypress Gardens launch site. Weigh-in is scheduled for 4 p.m.