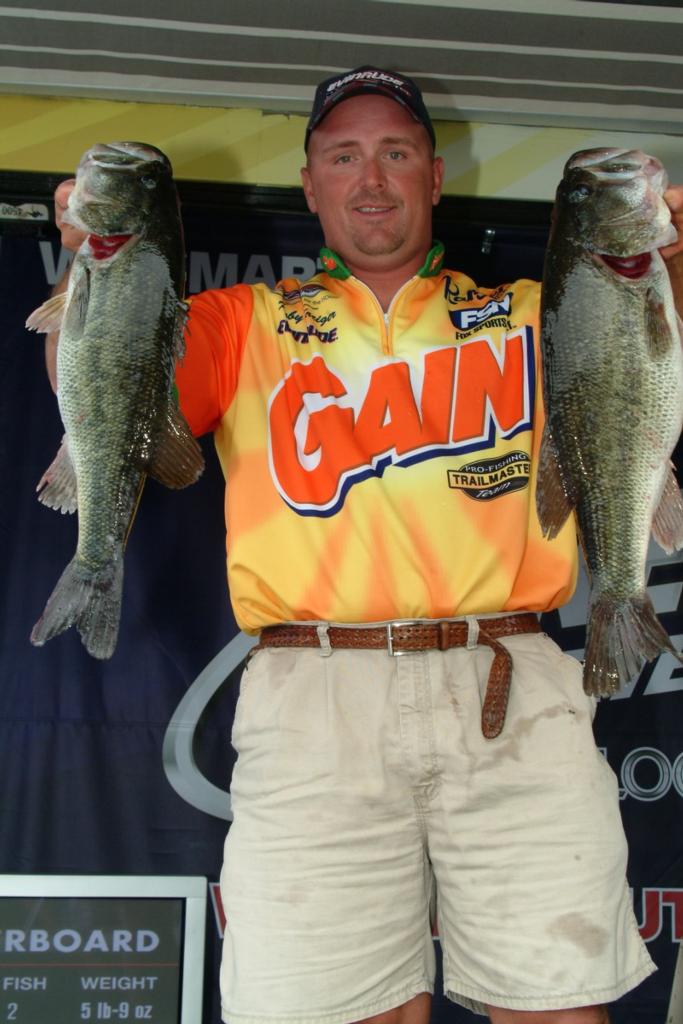 MANNING, S.C. – Despite rainy, cloudy and breezy conditions on the first day of the Stren Series event on South Carolina’s Santee Cooper, sight-fishing was once again the name of the game for the leaders.

It probably comes as no surprise to those who follow the Stren Series that Florida’s Koby Kreiger leads the event with 22 pounds, 9 ounces.

Kreiger, known for his sight-fishing ability, and no stranger to the winner’s circle in the Stren Series (three Stren victories to be exact), took the early lead by doing what he does best.

“I got really fortunate,” Kreiger said. “Conditions were tough and I kind of scrambled around for a while. Then I went back to my biggest bass that I couldn’t catch earlier in the day and caught her on the first cast. I went down the bank just a little ways and found three more big ones on one bed that had just moved up. I caught all three of them pretty quick. Those four bass were the bulk of my catch.”

In bed-fishing events, Kreiger likes to take a dominating lead on the first day so he can use the second day to look for new fish that have pulled up overnight. And that’s just what he plans to do tomorrow.

“I’ll probably try to catch 10 or so pounds tomorrow and then go looking for new ones,” he said. “They’re still moving up good and if this cloudy weather would get out of here and the sun would come out, they should lock on good.”

Kremer, too, is sight-fishing. He caught a total of seven keepers, culling twice.

“The conditions were not real good for sight-fishing today,” he said. “But I had staked out several beds in practice and I knew exactly where to make the cast. I caught three of my better fish casting blind to places where I knew beds were and then caught a few more just looking at them.”

As to why Floridians seem to do so well in sight-fishing events on Santee Cooper, Kremer added, “We have such a long spawning season in Florida and we get to do it a lot longer than folks in other parts of the country. On days like this when we can’t see them very well, we know how to keep presenting the lure until they bite.”

Opel, who also hails from Florida (Hernando), says this type of fishing, “is a Florida thing.”

“I love to sight-fish,” she said. “And even though I couldn’t see them because of all the clouds and wind, I knew where the beds were from practice and I just kept blind-casting to them.”

Opel scored eight keepers in one area today but says she does not plan to return there tomorrow.

“I’ve got several other places that are hot,” she said. “But I’m going to play it safe and try to catch only what I need to make the cut and save those places for the finals. I don’t want to hurt myself by catching fish I don’t need.”

Like the other sight-fishers, Opel is hoping for sun tomorrow to help the fish lock on beds a little better.

Nicolas Supik of Natrona Heights, Pa., is in third with 20 pounds, 14 ounces.

And as you might have guessed, Supik caught his fish sight-fishing today as well.

“I caught them all out of one area,” he said. “But I’m little nervous about tomorrow. There are plenty of fish in there, but the others won’t settle down and lock on the beds. I can see them roaming and cruising around but I don’t know how to catch them when they are like that.”

Ellis is fishing spawners, too, but he’s not looking at them.

“I have about 20 little sweet spots that I’ve learned over the years,” he said. “Most of them are giant stumps in depressions that are just out of sight. The fish spawn on the stumps but I don’t get up there and look at them. I back way off and throw a Senko to them.”

Ellis noted that he had to visit 17 of his best 20 spots today to collect his weight but hopes to let them rest tomorrow.

“Hopefully I can get 12 or 13 pounds elsewhere and let these little places rest and replenish. It usually doesn’t take long for more fish to find them so letting them rest for a day or two would help me out for the finals.”

Rounding out the top-10 pros at the Stren Series on Santee Cooper:

Capturing the day one big bass in the Pro Division was Scott Hamlin (8th) with a 9-pound, 4-ounce bass.

to take nearly a 6-pound lead over second place in the Co-angler Division.

He enjoyed a phenomenal day with fellow Cincinnatian Patrick Hailstones by catching a 7-pounder early and then catching its twin just before weigh-in.

“Pat and I are from the same area so that helped,” Ellis said. “He takes great care of his co-anglers and he went out of his way to help me. I just happen to get the big bites behind him on topwaters and soft plastics.”

One of Pickett’s bass was a monster weighing 8 pounds, 15 ounces.

“I caught it on a Senko on 8-pound test,” Pickett said with a big smile. “When it made a run for those cypress trees, my heart stopped. But I got her in.”

Rounding out the top-10 co-anglers at the Stren Series on Santee Cooper:

Tony Cook of Summerville, S.C., is in 10th with one bass weighing 9 pounds. Cook’s single bass also took the big bass honors in the Co-angler Division.