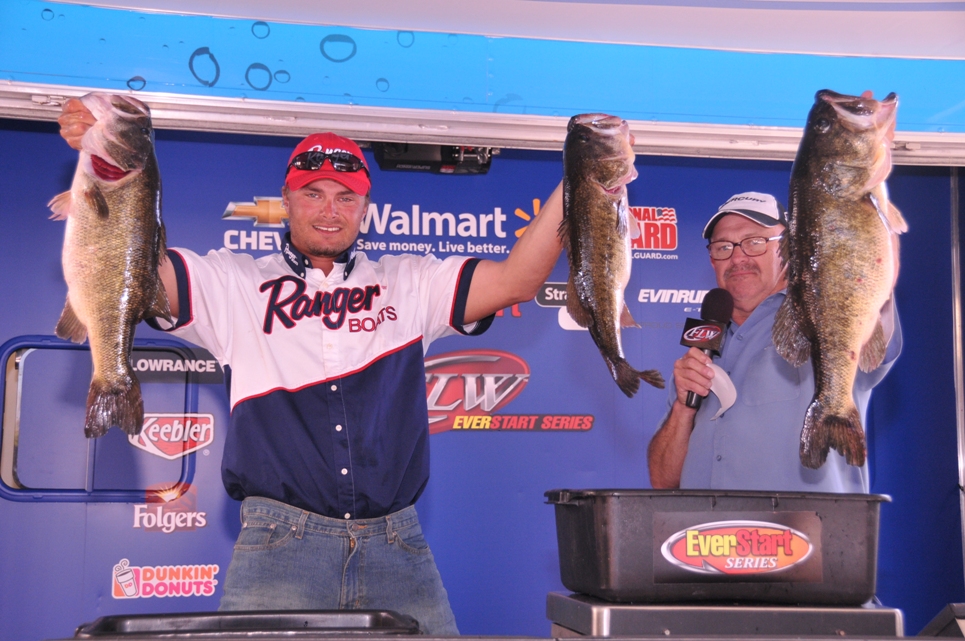 Brandon Medlock of Lake Placid, Fla., shows off 35 pounds, 7 ounces of bass with a little help from Tournament Director Ron Lappin, who had the privilege of holding up the 10-8. Photo by Rob Newell. Angler: Brandon Medlock.
Former EverStart champ looks to defend his Okeechobee title with huge catch
January 20, 2012 • Rob Newell • Toyota Series

OKEECHOBEE, Fla. – Before the EverStart Series event on Lake Okeechobee began this week many participants thought it would be possible to see a 30-pound plus bag of fish put on the scales.

But after the day-one weigh-in where only one limit broke the 20-pound barrier, the hopes of seeing a 30-pound limit of fish kind of wilted away.

Medlock is no stranger to Okeechobee. In fact, he won last year’s EverStart event. In that tournament his biggest limit was a mere 28 pounds, 1 ounce. Last year Medlock professed to catch his fish on a unique double-weedguard jig made by his dad. He says that jig played a key role in his 35-pound, 7-ounce catch today.

“That’s the biggest limit I’ve ever caught here on Okeechobee, what a day,” Medlock said. “I had a couple of places that I could not fish yesterday because of the wind blowing on them. Today the wind laid down a little bit and it opened those places up. I was able to run and gun the specific places like I needed to.”

Yesterday Medlock actually punched mats with a Gambler Cricket. Today, however, he broke out the double-weedguard jig and went to work. Though he did not want to share too much about how he works the jig, he did clarify that the way he fishes it is not a punching technique.

“I grew up fishing my dad’s jig on Lake Istokpoga and I just have so much confidence catching big fish with it,” he explained. “It’s a big 1-ounce jig and I trail it with a Gambler Otter. The stuff I’m pitching it to is specific and it’s not located in just one area. I had to run around a lot today; I probably hit 25 places with it and only caught about 12 bass.” 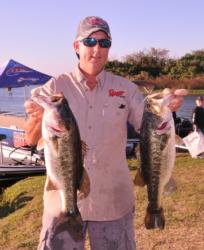 Fels is on the run and gun plan as well, running between about ten different places and mixing up flipping with casting.

“I just can’t do that flipping deal all day long so I’ve got a couple of other baits I’m casting in between the flipping that have worked out pretty well,” Fels said. “But the main thing for me has been to just keep moving and mixing it up.” 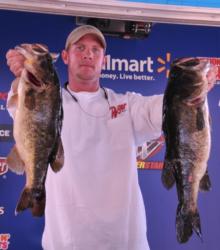 Brandon McMillan of Clewiston, Fla., hauled in 15 pounds today and slipped one spot to third with a two-day total of 34 pounds, 12 ounces.

McMillan stayed with his punching game all day, despite an early dry spell.

“I gambled this morning and went for a long run and it didn’t pay off,” he said. “I didn’t have a keeper by 11 a.m. and came back up to get something in the well. I had four big bites and lost two of them. After that all I caught was little ones.”

McMillan knows Okeechobee well leaving some to wonder if he has something special saved for tomorrow. But he conceded that is not the case.

“No, I’ve been fishing everything I have as hard as I can,” he added. “I have not been saving anything for Saturday – I’m just trying to get to Saturday.”

Brian Holder of Gastonia, N.C., moved up one spot to fourth with a two-day total of 33 pounds, 12 ounces. 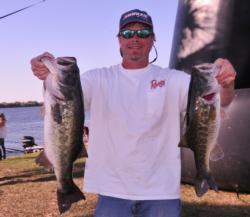 Holder has been mixing flipping with casting a Skinny Dipper for his catches. He noted that the Skinny Dipper has not necessarily improved his weight, just helped get a limit so he could bear down and flip.

“This morning I started flipping, caught two big ones, but then I hit a lull,” Holder said. “Not having a limit while the flipping was slow drove me crazy. So I went to the Skinny Dipper just to round out my limit. Then I came back to the flipping and could commit to it knowing I had a limit. I eventually culled everything out with the big stick.”

EverStart pro Randall Tharp of Gardendale, Ala., rounds out the top five with a two-day total of 33 pounds, 2 ounces.

Rounding out the top-10 pros in the EverStart Series event on Lake Okeechobee after day two: 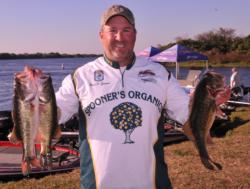 Spooner has been the model of consistency from the back of the boat, weighing 10-13 on day one and 10-15 on day two.

“It’s always been a dream of mine to come out here and fish with these guys,” Spooner said. “Koby Kreiger help me get started and kind of showed me what to do and now I’m off and running and it’s been a lot of fun.”

Rodney Glunt of Orlando, Fla., is in second place in the Co-angler Division with a two-day of 19 pounds, 15 ounces.

Cal Clark of Pulaski, Tenn., is in third place with a two-day total of 19 pounds, 12 ounces.

James Boyd of Russellville, Ala., rounds out the top five co-anglers with a two-day total of 17 pounds, 5 ounces.

Rounding out the top-10 co-anglers in the EverStart Series event on Lake Okeechobee after day two:

Day three of the EverStart Series Southeast on Lake Okeechobee will begin Friday at 7:00 a.m. at C. Scott Driver Park.