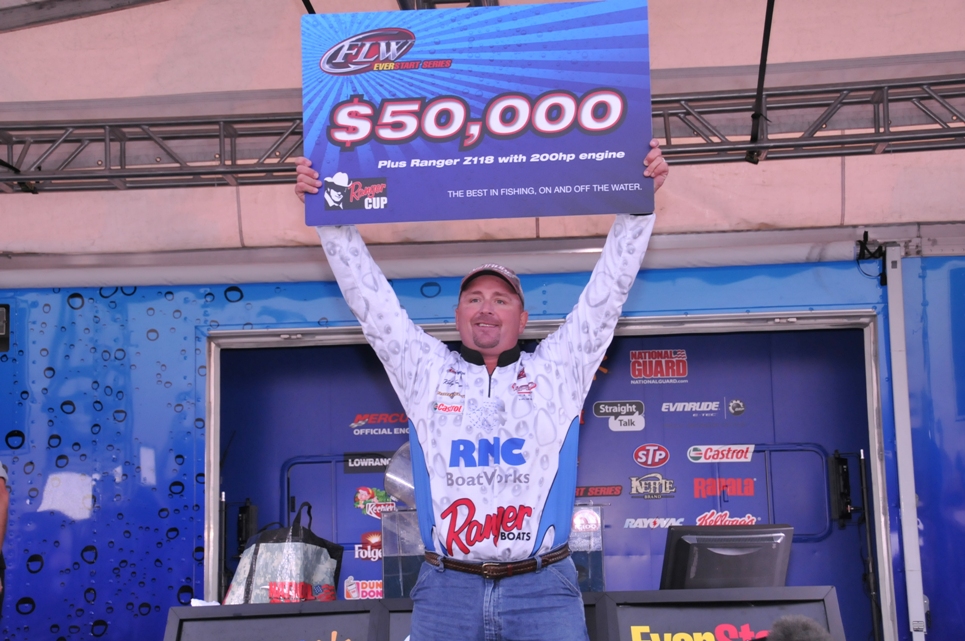 Today Kreiger won the fifth EverStart tournament of his career and his second EverStart Championship. He now holds the record for most EverStart wins in FLW Outdoors history.

“This means a lot to me,” said an emotional Kreiger after accepting the trophy. “There is a lot of work that goes into fishing these events. When I won my first Championship in 2002, I had an undeniable feeling during practice that I was going to win that tournament. I have not had that feeling again in a long time. And on the third day of practice here, I had that feeling again. And it felt just like it did in 2002. It just comes over you…its kind of unexplainable, really.” 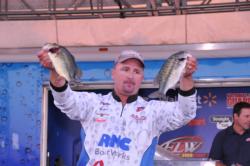 Kreiger relishes his Mr. EverStart title even more as he has always been a big participant and strong supporter of the EverStart Series. Even with a full FLW Tour schedule, Kreiger always finds time for the EverStart events and thoroughly enjoys them.

“The EverStarts are important to me,” Kreiger said. “It’s where I cut my teeth in professional fishing and found early success. It’s a great place for people to discover tournament fishing – a true gateway to the sport. So to be kind of a leader in this Series is special to me. I like to see the new guys come into the sport. I enjoy helping them and seeing them succeed. There’s no doubt that the EverStart Series is critical to the growth of this sport, so to win this means more than most can imagine.”

Another reason Kreiger enjoys EverStart competition is because it starts in the spring and ends in the fall, complimenting his fishing strengths.

“There are two things I like to do – fish in the spring when the fish are first moving up and fish in the fall when they get around bait,” the RMC Boatworks pro explained. “Admittedly, I’m not that great in the summer events. But when the bait starts balling up in the fall and the bass follow those bait schools – I love it. It’s how I won my first Championship and it’s how I won this one.”

Indeed, Kreiger was on the bait-pod pattern from day one of the tournament. In the evenings during practice he noticed the hoards of bait that would come to the surface in the fertile Ouachita system. Once he saw that behavior of the shad in the lower end of the river near the Columbia lock, he immediately found his comfort zone.

Each day of the event he targeted the banks of the river early with a CP1 – a homemade flatside crankbait made by Craig Powers. Once the sun would get up higher, the shad would gather up in huge schools around any object that stuck out over deep water, most notably big lay-downs or the ends of pole timber leaning out over the channel. He did most of his damage from noon until 2 o’clock in the afternoon when the bait began to rise from it’s suspended locations to the surface.

“In the mornings, the bait was deep, like 15 to 17 feet, I could see them all over the graph,” he detailed. “Starting about 11 they would begin to come up and get around any object on the surface. From noon to 2, it was game on. The bass would suspend under the bait; I’d catch in them in 2 feet of water fishing over 40 or 50 feet of water.”

Once the bait came to the surface, Kreiger went to work with a Mini-Frenzy umbrella rig (three- and four-wire, tipped with Zoom Swimming Fluke Jr.’s) and a War Eagle spinnerbait.

Kent Ware of Wadmalaw Island, S.C., the EverStart Series Southeast Division Angler of the Year, finished second with a four-day total of 34 pounds, 6 ounces worth $16,500. 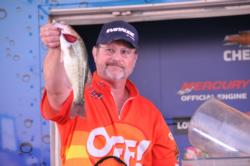 Over the last three days, Ware steadily climbed the leaderboard from 20th to 4th to second.

Like Kreiger, Ware realized the baitfish were rising up towards the surface everyday from mid-morning on through the afternoon. But instead of targeting laydowns, Ware found the shad moving to the dark protection of docks in the main river and Moon Lake area.

“The shad would get around the docks pretty thick in the afternoons,” Ware explained. “And the bass would set up on the corner pilings to ambush those suspended shad.”

Ware noted that reaction baits were certainly a key to catching the shad-related fish.

“I’m normally a jig and worm man,” he said. “And I never caught a fish all week on a jig or a worm. Each day I threw a different reaction bait around those pilings to get the fish to bite.”

On day one he used a ChatterBait, on day two he went to a Rat-L-Trap, on day three he opted for a Redeye Shad with no rattles and today he went to a War Eagle spinnerbait. 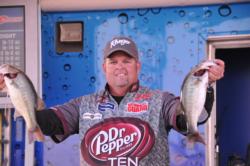 Stricklin started the event with a bang, leading the Championship on day one and holding onto second on day two. On day three he took a tumble to the 8th spot with just two keepers but rumbled back to third today with four fish weighing 8 pounds, 5 ounces.

Stricklin’s bread and butter all week was the infamous D’Arbonne spillway, noted as a productive area for other tournament wins on the Ouachita River. Stricklin located an underwater rockpile near the spillway that topped out to 6 feet on the top and fell to 20 feet on one side and 9 feet on the other side.

He grinded the rockpile all week with a Strike King Series 5 crankbait in sexy shad color. Today he switched to a Strike King 2.5 square-bill in a chartreuse color with a black back. 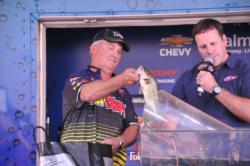 Joseph Kremer of Osteen, Fla. finished fourth with a four-day total of 32 pounds even worth $7,500.

Upon arriving to the Ouachita River, Kremer noticed something that made him feel at least a little more comfortable with being in Louisiana.

“This river lays out a lot like the tidal St. Johns River in Florida where I grew up fishing,” Kremer said. “Obviously the St. Johns has a lot more vegetation in it, but there are sections of that river that are like this, just straight river with sand banks and laydowns. And the thing I’ve learned to look for from the St. Johns is anywhere the bank has `fallen off’ into the river, usually on the deeper bends. Wherever the bank falls off from erosion, there is usually an underwater ridge or hump formed by that chunk of land that fell into the river. And the fish here seemed to set up on those underwater ridges just like on the St. Johns.”

When targeting the “fall offs” Kremer relied on an old Florida standard – a Bomber 7A – to crank the tops of the humps. His best color was sexy shad type hue that resembled the shad that were moving up on the humps in the afternoon.

Martin was less than confident when the Championship began. He started the event on the “biggest community hole” on the river – where the D’Arbonne dumps out into the main river and received a pleasant surprise. 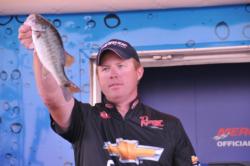 “I wacked them on an umbrella rig – a Picasso Bait Ball with four blades and five swimmers,” Martin said. “There were a lot of boats fishing there but I caught fish after fish on the Bait Ball.”

With the good start, Martin proceeded to build on his momentum, “junk fishing” the river to the north in the following days with a Boing Lures topwater walker, a drop-shot and a jerkbait.

Rounding out the top-10 pros in the EverStart Series Championship on the Ouachita River: