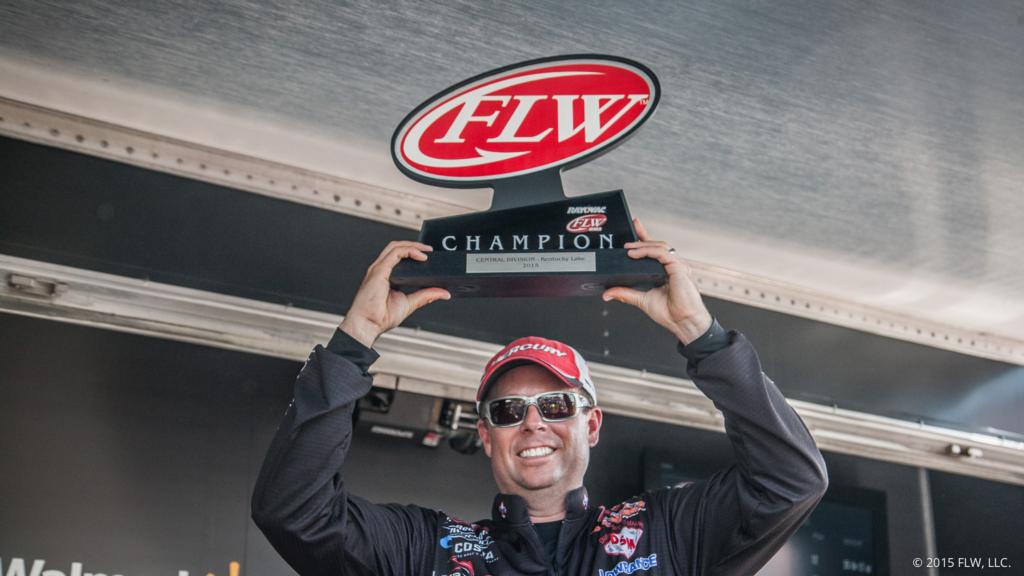 Call it what you will, but Tom Redington’s victory in the Rayovac FLW Series event on Kentucky Lake presented by Evinrude Saturday scratched an old itch that’s been bothering him for a year. Redington won the Rayovac derby with a three-day total of 71 pounds, 13 ounces. It was a more satisfying finish for Redington than he experienced in 2014, when he led the Walmart FLW Tour event on Kentucky Lake out of Paris Landing on the second and third days, only to falter in the championship round.

This year, Redington didn’t stumble, even when Randy Haynes threated to blow out the standings on day two with a 25-pound, 15-ounce bag. Instead, Redington stuck with the big-bite lure he knew wouldn’t garner many strikes, but draw the right kind of fish he needed to win, and went to work. The result was a round-three limit weighing 25 pounds, 7 ounces – the second best limit of the tournament.

Redington led the event on day one with 24-13, before dropping behind Haynes on day two, 47-15 to 47-6. Not only did he make up the 1-pound, 9-ounce deficit, but Redington eased past Haynes by just over 2 pounds.

“It felt really good not to see it slip away again,” says Redington, who wound up in sixth place in that 2014 Kentucky Lake Tour event. “On that last day last year, my schools had fizzled out and all I could hope to do was scrape together a small limit. It wasn’t nearly good enough.

“This time it just lined up for me. The bigger fish stayed hooked, and the fish showed up when I needed them,” he continues. “Today, on my last cast, I caught a 5 ½-pounder. Everything just fell into place.” 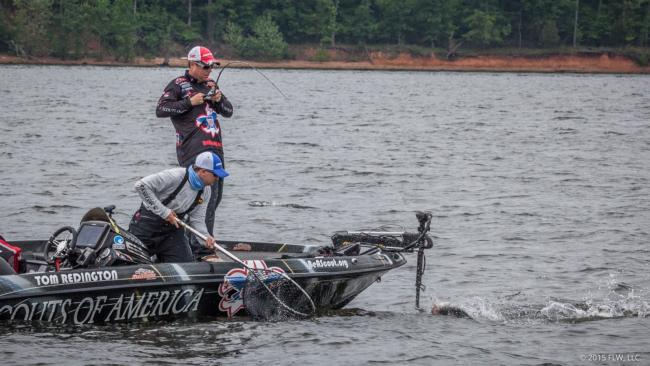 Haynes knew his lead was in jeopardy because, unlike previous days, he couldn’t catch the bigger kicker to put him over the top. “I think I left the door open…,” he muttered when word started circulating prior to the final weigh-in that Redington had a heavy limit. Still, Haynes’ five were nothing shabby, and constituted the fourth heaviest sack of the day after Redington, Jason Lambert (25-4) and Clent Davis (22-5).

“They [the bass] made a little move and I couldn’t keep up,” recalls Haynes. “I stayed close to where I caught my best fish Friday because I didn’t think it was worth it to go back south and run all that stuff again. I figured I needed 22 or 23 pounds to lock it up and that the right quality of fish were not too far from Moors [the takeoff site]. It just didn’t happen.

“The better fish moved, but when I ran over some places, I never got that sign that they had moved. I kept pounding away, and culled with a couple of 5-pounders later in the day [Saturday] that helped me get rid of a couple of 3-pounders, but that was it. ”

Redington ran the same ledges between Blood River and Paris Landing that produced his limits on days one and two. He labelled them “community holes,” but they were distinguished by their proximity to the main river channel.

In practice, Redington relied on a plum-colored 10-inch Lake Fork Trophy Lures worm. Once the tournament started, he fished the worm awhile on day one, but then switched over exclusively to a 6-inch swimbait rigged on a 3/8- to 3/4-ounce jighead, depending on depth. With two potential “ledge tournaments” at Lake Eufaula and Lake Chickamauga coming up in the Walmart FLW Tour, Redington declined to name the swimbait. 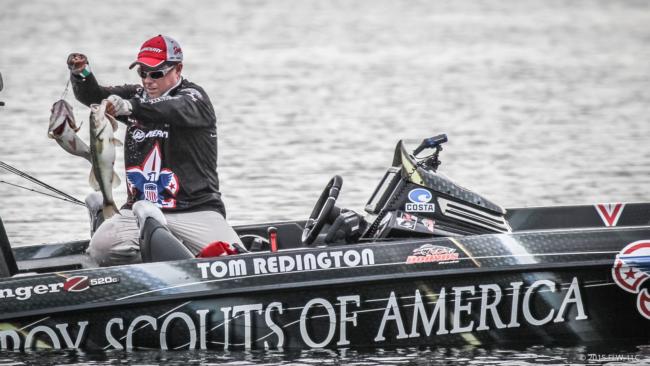 “I’d look at my graph and if the fish were on the bottom, I’d swim and maybe snap the bait along the bottom. If I saw that they were off the bottom, I’d count down the swimbait and then swim it just above them.”

Redington says he never found many big schools of bass on the spots he fished, and there wasn’t any “hot section” of the lake that stood out from the others. He rotated from spot to spot. Sometimes one would produce while the next one didn’t, but then, on the next rotation, the reverse might occur.

“There wasn’t much predictability about when and where I’d catch fish on my spots,” recalls Redington. “All I knew was that they would be there, and more and more were coming out of the big coves every day. So that gave me confidence that I was doing what I needed to be doing.”

For his efforts, Redington collected $40,000 and a Ranger Cup award of a Ranger Z518 with 200-horsepower outboard.