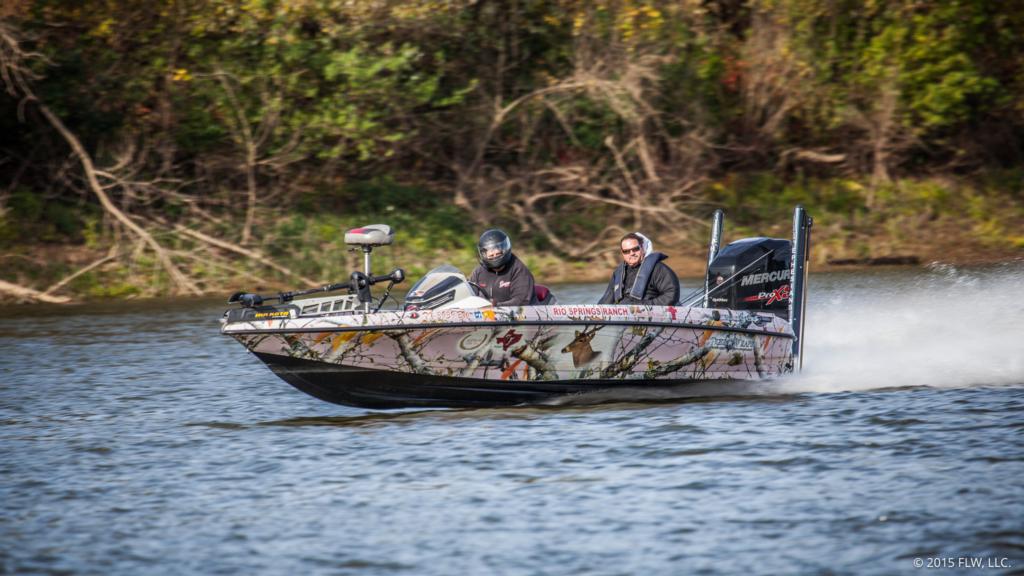 With just a half hour until check in for the first flight, it’s go time for a lot of anglers. While we’re headed for weigh-in, the pros are going to be streaming back down the Cumberland and Tennessee and back through the lock at Smithland. You should be headed back here right at 3 p.m. CT for the beginning of the live weigh-in.

One of our OTW reporters is already off the water and the rest will be coming off in about 40 minutes to get back in time for weigh-in. So, our coverage might be get a little slower in the coming hour.

Chris Franks, fresh off a top 10 in the recent Rayovac FLW Series on Clear Lake, is starting his way back from the Cumberland already. He’s got a limit and is hoping a couple more stops let him strike gold.

Matt Arey and Thomas Helton both have three keepers out of the Cumberland River and Mike Moran has two. So, while they aren’t hammering them, they are just a few bites away from a limit and perhaps a pretty sweet day.

With two hours left before the first flight checks in it’s crunch time for a lot of anglers. The wind is still running up the river at a pretty good clip, everything is eminently fishable. It’s also downright pleasant now – the sun has been baking all day and many anglers have begun to peel their bibs off.

Most of the field is sitting on a partial limit of some kind. The ability to fill those half-limits out in the last few hours is critical. There’s some chance that the continually warming water will fire the fish up, but it was never that cold this morning so the morning bite was likely the prime window.

How an afternoon charge is made is anyone’s guess – it could be someone who finds a school, or someone who manages to flip up something big that is sticky tight to cover to get out of the sun. We’ll have to see.

Checking in with one of the better sacks of the day is Nick Gainey. He’s got four fish and one of them is pretty dang solid. He’s not doing anything crazy, just fishing rip rap on the Tennessee River.

Dicky Newberry is still on his prime spot, and he’s upped his personal estimate to about 13 pounds. He also says that he’s actually re-caught some of the fish he released this morning. If about 30 pounds of bass live there he could be in good shape for three days of fishing.

Also of note, Mark Rose is up to three keepers (all small) and David Hendrick has about the same thing.

Just about everything has been working a little bit today. Finesse presentations, crankbaits, plastics, spinnerbaits, umbrella rigs, jigs and about anything else other than topwaters have played a role thus far.

As one would expect for a river, current breaks are key. That break could be an offshore rock, a stump, line of rip rap or maybe even an eddy or place where some different current comes in. In the creeks the current is a little less key – there the stumps and other wood cover are the most important features. 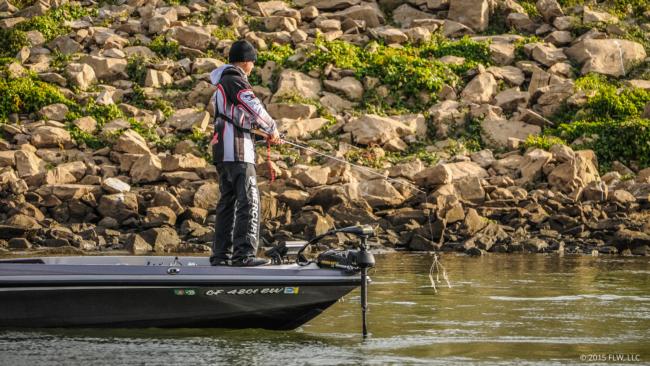 Halfway through the day, the results are pretty mixed. Though some have caught them pretty well in the Cumberland and in the Smithland Pool, nobody fishing the Kentucky Dam tailrace has more than one fish, though every bass caught up there has been pretty big.

In Smithland, Todd Auten is slingin’ a blade and has a pair of keepers, but is reporting tough fishing overall.

In the Tennessee, the most recent updates have Casey Martin on a goose egg, Brandon Hunter giving the thumbs down signal and Mike Blake with his first keeper of the day.

On the other hand, the Cumberland is producing. David Valdivia has four – three decent ones and a small one. Tommy Williams, a noted Ohio River slugger, had a good limit and has been culling and Nick Lebrun has four for about 9 pounds.

While the water in the Tennessee has stayed much the same, the Cumberland River and Smithland Pool are a bit of a different story. There, the water has fallen enough that Drew Benton was locked out of a small creek he expected to catch ‘em in. Fortunately, he adjusted and has boxed a good smallmouth and another keeper to give him a solid start on day one.

Clayton Batts has a pair of keepers as well, and Todd Hollowell was fishing through a creek in Smithland that our photographer there couldn’t catch up to him on the trolling motor.

Up in the Smithland Pool, Mark Daniels Jr. has filled a small limit. In the Tennessee, Justin Morton has one that he says is a good one for the river and Chris Gable is sitting on one keeper. In the Cumberland, both Matt Arey and Andrew Upshaw are looking for their starter fish.

Though still decently warm and very sunny, the wind is getting up pretty good on the Ohio down by Paducah. The flags are whipping briskly and there are whitecaps moving against the current on the main river.

So far, the fishing seems to be pretty decent. There are certainly fish being caught up by the dam on the Tennessee – not many, but they are almost all in the 2½- to 3-pound range.

Things are a little slower on the Cumberland, but Mark Rose has pulled a keeper spot from it and Chris Engelage has a solid 2-pound smallie. Additionally, Ben Blaschke and co-angler Christian Martin each have a pair of keepers and Blaschke says he jumped off a big one earlier.

Though Newberry did his damage with a crankbait, the most popular bait on the Tennessee and Cumberland Rivers is the good ol’ umbrella rig. 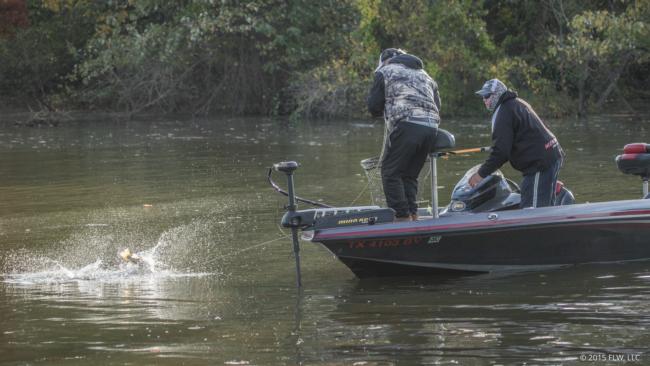 Since the last update, Dicky Newberry has added another five keepers and one 3-pounder. He says he’s got about 11 pounds, but is more likely pushing 13+. Though the chance of repeating such a hot start seems unlikely, Newberry has already put himself in contention.

Also checking in with a fish is Kevin Stewart – he’s got one smallmouth from the Cumberland River that weighs about 2-pounds. 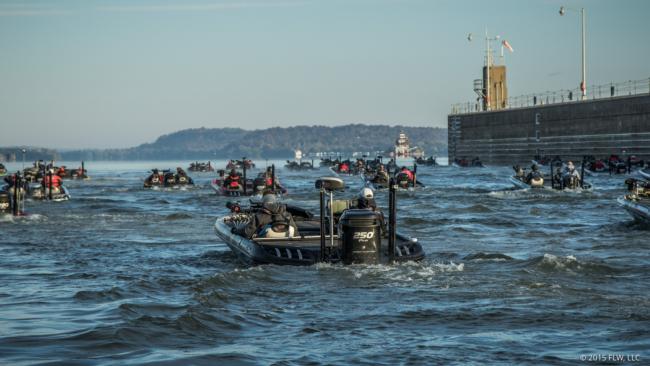 The pros have finally made it into the Smithland Pool  – they’re landing the first casts of the day right now.

Already, Dicky Newberry is making hay in Smithland – he has a limit already and just caught six more while our cameraman was watching. He thinks he’s got about 10 pounds.

In the Tennessee River, Clent Davis has checked in with one keeper. So, he’s 1/5 of the way to a successful day.

Kerry Milner is on the board with a 3-pound smallmouth from the Tennessee. Fish like that will be gold this week.

Milner also says that despite all the rain, the Tennessee is running at about the same color, current and level it was in practice. 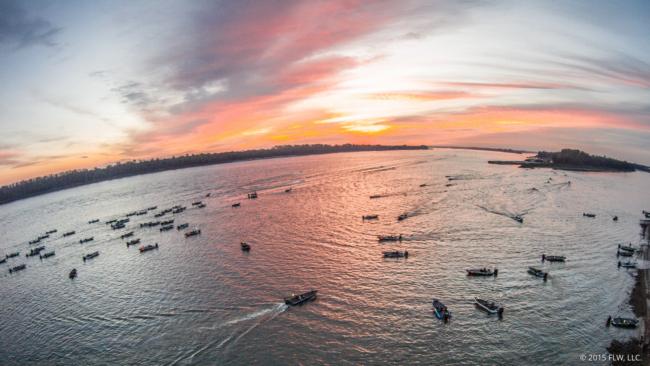 The start of day one of the Rayovac FLW Series Championship was absolutely pristine. Though crisp, the weather isn’t freezing cold like day two might be, and the wind is moderate.

So far, we know that the 73 boats that are headed through the lock into the Smithland Pool have yet to start fishing. The lock is plenty big, so they should be through in one shot at about the time you’re reading this.

The field has yet to make it the Barkley Dam on the Cumberland River, but 12 boats have made it the Kentucky Dam on the Tennessee and are already fishing.

With luck, we should have some catch updates soon.