Mixed Bag Could Be on Deck at Eufaula 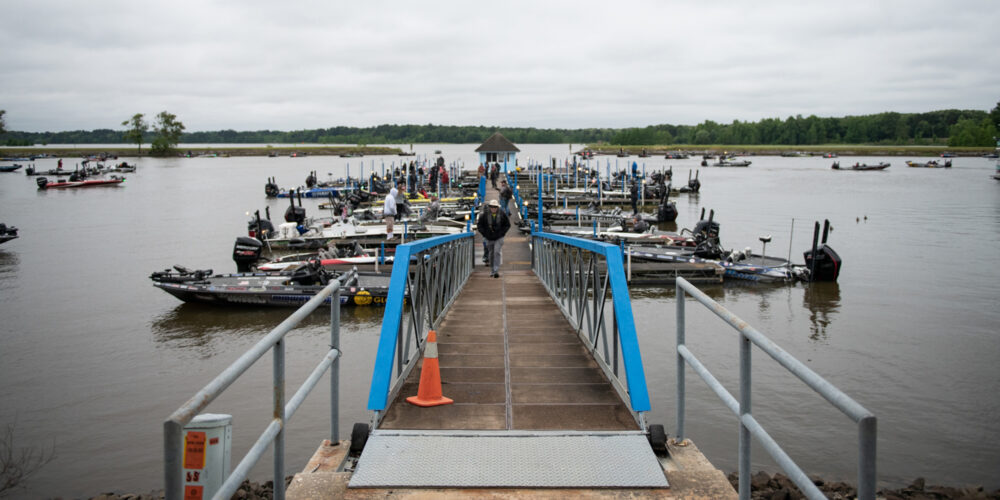 Day 1 of the Tackle Warehouse Pro Circuit Presented by Bad Boy Mowers took off on Lake Eufaula under cloudy skies and temperatures in the 50s for the fourth stop of the 2021 season. One of the original offshore lakes in the southeast, Eufaula should provide plenty of opportunities both on and off the bank for the pros this week.

The Grundéns Stop 4 Presented by A.R.E. is hosted by the Eufaula Barbour County Chamber of Commerce.

Lily pads, gator grass and hyacinth are the most abundant vegetation in the lake. There’s also hydrilla, though its prevalence varies from year to year.

Off the bank, there are countless brushpiles and some old timber. The lower end features numerous ledges where schools of bass flock as the summer heat sets in.

Back in the Day

Some of the most interesting May history on Eufaula can be found in the FLW Tour events held in May in 2013 and 2015. Back in 2013, Randy Haynes fished offshore exclusively and tallied more than 73 pounds to win by a wide margin. Behind him, Bryan Thrift ran brush, and some other pros fished shallow and even caught spawning bass. In 2015, Thrift won in an event that was more offshore-focused. With a total of more than 69 pounds, the Carolina superstar put his focus on brush, but still had to pluck a 3-pounder off the bank with a frog on the final day. In that event, Troy Morrow and Clent Davis were in the hunt out deep, but Jeff “Gussy” Gustafson and John Cox made the Top 10 going shallow.

Recent history in June features some bigger weights and better fishing, but still shows off a mix of patterns. In June of 2020, Josh Stracner won a Toyota Series event on offshore brush, and outside of Dustin Smith’s bluegill bed pattern, the Top 10 was dominated by offshore patterns. Just a week later, Buddy Gross won the Bassmaster Elite Series event on Eufaula with more than 80 pounds, again focusing on brush.

This week, the fishing should be pretty good, and it sounds as though there will be plenty of options in play for the pros. Josh Bragg is a rookie on the Pro Circuit with a previous win at the BFL level on Eufaula, and he says there’s plenty to look at.

“This year we’ve had some wet spurts of cooler weather over the last month and a half,” says Bragg. “I think it’s really drug out the spawning season for the fish here. Last year when we were here, you could catch a few fish shallow, but it was obvious after a couple days of practice that wasn’t the deal. This year, there are still a ton of fish on the bank.”

Bragg says he wouldn’t be surprised if some pros catch a bass or two off the bed, and thinks one or two pros will make the Top 10 up shallow. Plus, practice reports have a pretty solid shad spawn going on. So, there’s definitely a shallow factor in play this week. Still, Bragg and many others have put a lot of idle time in during practice to chase the win.

“You can research for the last five or six years, and from April through the summer, the offshore deal is predominantly what has excelled in tournaments,” says Bragg. “Everybody knows that, and I put all my eggs in the offshore basket. But, the offshore bite isn’t at its peak now, it’s fishing pretty tough out there.

“I think a lot of the fish are scattered. They haven’t really grouped up out there yet, and there are still so many fish on the bank, that I don’t think the big wave of fish has moved out,” says Bragg. “With that being said, I did not get to fish a lot of stuff, because there’s so many boats that are out there looking and idling. But, from what I could tell, from the two days of practice, the big groups of fish are not out there.”

One of the complicating factors on Eufaula is that there is such a strong brushpile bite. That means that any pro who fishes offshore has to parse their way through dozens of brush piles and more traditional offshore ledges.

Over the years, the offshore bite on Eufaula has been broken down pretty extensively in large multi-day events, but the shallow bite is a bit more a mystery. Frogs have historically done a lot of damage on the bank, but that’s not the only way to catch them. Clabion Johns, who is currently leading the Polaris Rookie of the Year race, is one of the most dedicated shallow anglers around on Eufaula.

“It’s the only thing I do on this pond anymore,” says Johns of the shallow game. “I grew up fishing this lake, and I grew up fishing it deep and shallow. But, I spent so much of my childhood out there dragging a worm that I’ve grown to hate it. It’s not fun to me, it’s not a challenge, and I don’t think it showcases an angler’s skill. I find enjoyment and fulfillment in the challenge of catching fish shallow. The mastery of mechanics it requires – that you have to hone to be able to catch them shallow. So, that’s just what I do.”

Considering it’s about a lock that Johns will try to make it work shallow, this specific time of year could be hit or miss according to him.

“The thing about Eufaula that a lot of people don’t understand is that when bass spawn here, they go instantly deeper than they go any other time of year,” Johns explains. “The ledge guys, the deep guys, dominate April and early May. They catch these skinny, laid-out fish, and they’ll catch hundreds and hundreds of them as deep as 30 feet. You just can’t compete with them.”

Some of the most notable locals, like Ryan Ingram and Scott Montgomery, are diehard offshore anglers. And, staying offshore year-round is as viable on Eufaula as it can be on many Tennessee River fisheries. Still, Johns says that at the right time of year, the balance can swing shallow.

“Once June hits, and it can happen around Memorial Day too, with a full moon and a mayfly hatch, the fish start coming back to the bank, “says Johns. “Not all of them, but enough of them to where most single-day tournaments in June tend to be won shallow, just because you’re going to get two or three big shallow bites. But, not all of them, because it’s hard to beat Ingram and Montgomery out on the piles.”

Still, the allure of shallow fish is significant and exciting. Last year in June, Smith made the Top 10 with a topwater in hand the entire time. Johns, or perhaps someone else, would like to do that or better this year.

“I really don’t know what I’m up against, but I went down one of my good stretches on the first day of practice and got two big bites, and I went down another stretch yesterday and shook off two 5- or 6-pounders,” says Johns. “So, the patterns are there.”

Shallow or Deep, It Should Be Fun

Eufaula doesn’t necessarily have the allure or ceiling of a place like Lake Seminole or Santee Cooper, but it’s still a historic fishery with some really big bass. Bags in the low 20-pound range are commonplace, and the lake has sometimes had some of the best fishing in Alabama or Georgia with certain combinations of grass and at certain times of the year. This week, most everyone expects the fishing to be good, even if a smashfest isn’t quite a lock.

“I’m thinking an average of 17 ½ per day to win, so 70 pounds or so,” says Bragg. “This year, if something helps it, it’s that you can catch quality fish from the bank, all the way out deep. When Haynes won, he had a couple of ledges that he really leaned on. When he depleted those fish, his weight really fell off. Now, if somebody can figure it out shallow and deep, I don’t think their weights are going to fall off as bad, because you’re not leaning on one or two spots.”

Johns is also optimistic, and there have been plenty of practice big ones on Instagram this week. So, stay tuned for what is likely going to be an excellent bass tournament.